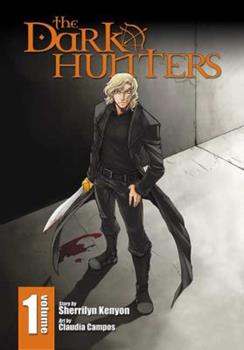 In the war against vampires, mankind has only one hope: The Dark-Hunters. Ancient warriors who died of brutal betrayal, the Dark-Hunters have sworn themselves into the service of the goddess Artemis to protect us. It's a pact with pretty good perks. Immortality, power, psychic abilities, wealth and a cool wardrobe. But it comes with a few drawbacks: fatal sun poisoning and a new, irreparable dental problem. But aside from the fangs and nocturnal lifestyle,...

Creating a new audience for the Dark-Hunters...

Published by Thriftbooks.com User , 12 years ago
Normally with my reviews I like to summarize the plot a bit in my own words to start it out but for some reason I just don't think this one needs it. If you read the blurb for this manga version of the already very popular Dark-Hunters novel, Night Pleasures, you can get a pretty decent idea of what this manga is about. Why? Because they've done such a great job of translating the novel into a manga. It's been a few years since I read Night Pleasures but it all came flooding back when I picked this manga up. I'm very new to the manga format but it really has been growing on me. It's fun to see a 'comic book' version of a story I've already enjoyed and they've made it teen friendly! The sensuality is toned down and the nudity is carefully hidden making this a great one for younger readers who might not be ready to trudge into the Dark-Hunter novels which do get a bit erotic at times. Fans of vampires and manga should definitely pick this one up, even if they've never heard of the Dark-Hunters series. The mythos is well done and the series has great characters and romance. I do feel that if you're a fan of the series but don't care for comic books and such this one isn't for you. Some readers who aren't familiar with manga may find the backwards to front layout confusing and annoying. I did love the art though and can't wait to pick up the next installment!

Published by Thriftbooks.com User , 12 years ago
I never really like American comic, I rather watch them on television or wait for the live-action. Yet, this book changed my thought. The story is great, a lot of humors and so actions. They try to adapt the Japanese drawing, but still not that good. Well, I don't really mind about the drawing. The story stands along is already good. When I wait for the book, I don't think I will buy the second one, but after finishing the first volume, I definitely buy another one. Recommend it to anyone like vampire, humor, and a little bit of Greece legends and powers.

Published by Thriftbooks.com User , 12 years ago
I enjoy the occasional manga so I was excited about this series. I was worried about how it would turn out though. I was blown away and enjoyed it so much. And it is so true to the books. The only dissappointment was that it was only half of her first book. I can't wait to see how the other characters are drawn-like Archeron and Zarek. With the manga you get to have the outrageous facial expressions so moments that are only slightly humorous in the regular books stand out much more in the manga. I can't wait for volume 2.

Published by Thriftbooks.com User , 12 years ago
While Kyrian of Thrace was out fighting the Romans, his wife was at home welcoming them into her bed. For a chance to kill the wife who betrayed him, Kyrian swore his allegiance to Artemis and fights as a Dark-Hunter in her army against the daimon predators. Artemis has Kyrian's soul and he is immortal until something finally kills him. Believing all women are treacherous, Kyrian has spent over twenty-one hundred years alone. Every night Kyrian prowls the streets protecting humans from, not only the normal evils of humanity's nature, but also from daimons out to steal their very souls. After being ambushed one night, Kyrian wakes to find himself handcuffed to a beautiful human female. Amanda Devereaux just wants to be normal. The rest of her large family can practice spells, hunt vampires, and do all the paranormal stuff. Amanda has rejected and suppressed her powers since she was a child. Unfortunately for her, fate will not leave her in peace. Mistaken for her vampire hunting sister, Tabitha, Amanda is kidnapped and handcuffed to the most handsome and arrogant man she has ever laid eyes on. As much as she hates the thought, Amanda and Kyrian are stuck with each other. Once free of the cuffs, Amanda is still marked for death. By day she can go and do whatever she pleases, but until Kyrian can find and kill the daimons toying with them, Amanda must spend her nights either by Kyrian's side or within his fortress of a home. Amanda is the key to everything. Should Amanda die, so does Kyrian, and humanity is doomed. ***** FIVE STARS! I have always wanted to read the Dark-Hunters series, but never had the time. So I am thrilled to find out that the series is being released as a graphic novel, manga style. Manga style basically means everything is backwards. The beginning of this graphic novel is where the back normally is. The right page is read before the left page. On each page you must read/view the panels right-to-left as well. Do not worry. Within a single minute you will have the rhythm and the action begins. This volume is NOT a stand-alone story. It ends at a dramatic spot and will be continued in the next volume. This manga novel does not just ooze drama; it hemorrhages with excitement in a paranormal world that will surprise you. Most excellent! ***** Reviewed by Detra Fitch of Huntress Reviews.

Published by Thriftbooks.com User , 12 years ago
WOW - I have to say I was astonished at how well done this manga is. I love Kenyon's Dark Hunter series of novels, and I was excited but hesitant about the prospect of them being adapted as manga (and not comics as many other bestselling series are, such as Anita Blake). Thought I love the full-color that comics come in, the black and white manga seems to flow better and allow the story to be equal to the art. First, this was an excellent adapatation. I had only intended to glance through it when it arrived yesterday, but instead found myself reading straight to the end! The Dark Hunter series has a lot of underlying mythology that is important to the storyline - in particular, Kenyon's twist on vampires. The manga managed to capture the key parts without losing the richness of the original novels. It also retained the humor found throughout the series. This volume adapts the first half of "Night Pleasures," and even though I already know how it ends, I can hardly wait for volume 2. This manga has a more noticeable amount of text due to the necessary backround information, but it was presented in a good way. Second, Kenyon was careful to stay true to manga's Japanese origins. The manga reads right to left, and according to her website the artist is Japanese, and subsequently so is the art style. The quality of the paper and printing is very high. I didn't notice any typos, and the text was clear even in the wordy sections. The art is fantastic. I love how the artist rendered the characters, especially Tabitha (goth chick). The characters have the quality many describe as anime (big eyes, expressive faces, teenage-looking). Though I liked it, it took some getting used to after reading the books and imagining them differently. I do wish the cover was a little more flashy (as volume 2's cover looks to be). Fans of the novels should really enjoy the manga, but newcomers unfamiliar with the series can also enjoy it. Though I recommend reading the books as well (because they are just so good!), the manga can stand alone and be enjoyed without the books. Highly recommended!
Copyright © 2020 Thriftbooks.com Terms of Use | Privacy Policy | Do Not Sell My Personal Information | Accessibility Statement
ThriftBooks® and the ThriftBooks® logo are registered trademarks of Thrift Books Global, LLC