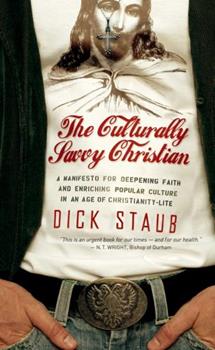 The Culturally Savvy Christian: A Manifesto for Deepening Faith and Enriching Popular Culture in an Age of Christianity-Lite

In The Culturally Savvy Christian--his incisive critique of contemporary culture and religion--Dick Staub concludes that though it is influential, American popular culture is generally superficial (diversionary, mindless, and celebrity-driven) spiritually delusional (moralistic, therapeutic, and deistic) and soulless (sustained not by art, craft, and ideas, but by the mad pursuit of profit--propped up by marketing and technology). Similarly American...

Published by Thriftbooks.com User , 15 years ago
Dick Staub does not like what he sees. Nor should we. Much of the Western world is dominated by popular culture. And popular culture is overwhelmingly brainless, shallow, soulless and vacuous. If Paris Hilton and Big Brother are the best we can come up with, we are in very bad shape indeed. But it gets worse. The real answer to the cultural and spiritual wasteland of modern culture is biblical Christianity. But much of what passes for Evangelicalism today is just as bad. It too is largely shallow, intellectually empty, culturally vapid and spiritually anorexic. Culture-lite is more than matched by Christianity-lite. Indeed, the latter is largely a product of the former. Modern culture offers nothing of substance, whereas the church should. But too often the church is slavishly mimicking the latest cultural trends in the interests of being relevant. Thus it comes off just as anaemic and shallow. Dick Staub argues that a needy world is certainly being short-changed by pop culture, but it is also being short-changed by much of Christianity these days. The paucity and poverty of contemporary Evangelicalism is made worse by knowledge of the fact that it was not always this way. At one point Evangelical Christians were known for their intellectual, cultural and aesthetic complexity. Think of such massive figures as C.S. Lewis and J.R.R. Tolkein, to name but a few. Evangelical Christianity used to be on the cutting edge of artistic, cultural and intellectual endeavours. But today we have largely lost that depth and richness. Indeed, think of the rich contributions made by people of faith in the past: Dante, Dostoevsky, Rembrandt and Bach. The Christian church led the way culturally, artistically and intellectually for centuries, producing a deep and rich culture. But today the church mostly just parrots pop culture, which is all about entertainment and amusement. Pop culture is destroying the soul while filling the wallets - of global marketeers. Instead of promoting the good and the true and the beautiful, it is about the "cultivation of a sizable, wealthy, impulsive generation groomed to be consumers from the cradle to the grave". Tragically, young believers are not all that different from young non-believers today. Staub reminds us of the grim statistics: evangelical's behaviour pretty much resembles that of non-believers. We tend to be just as consumeristic and materialistic, just as shallow, just as anti-intellectual and just as apathetic. Divorce rates are as high in the churched community as outside it; belief in absolute truth is at an all-time low; and Christian discipleship seems to be a lost art. In order to see why we should be concerned about all this, we have to remind ourselves of the truth that we are made in the image of God. As Staub reminds us, human beings have intellectual, spiritual, relational, creative and moral capacities, and all these areas should be used to love and serve God. He quotes Hans Rookmaaker who said some

Published by Thriftbooks.com User , 15 years ago
In "The Culturally Savvy Christian: A Manifesto For Deepening Faith And Enriching Popular Culture In An Age of Christianity-Lie", noted radio broadcaster, writer, speaker, interpreter of faith and culture Dick Staub calls upon American Christians of all denominational affiliations and backgrounds to become 'ambassadors' of a counterculture to the broader community influences of money, marketing and technology which are so empty of ideas or aesthetics with respect to the national culture of commerce and secular value systems. Staub argues persuasively that much of the popular culture of today is basically toxic in its messages which have come to compete with religion as 'preacher, teacher, storyteller and identity shaper'. Staub further contends that only those who are intellectual, creative, relational and moral can revive the general culture and counter its growing toxicity with respect to the public good and the private well-being of ourselves and our posterity. The culturally savvy Christian mus follow ten rules in order to accomplish this culture transformation: read cartoons; separate fact from fiction; ask the why of things; recognize the shallowness of celebrity; become aware that popular culture is where we can best to theology; understand that the new media technologies can dehumanize us; live an un-frantic life in response to God; become more interested in being changed within ourselves than in changing the world; celebrate thoughtful artists and see God's image in them; and, most important of all, know why Jesus came to Earth -- not to make us Christians, but to make us 'fully human'. "The Culturally Savvy Christian" is life-changing reading and as such is very highly recommended to the attention of Christians seeking to live fully Christian lives in an increasingly un-Christian world.

An intellectual resonse to Christian Lite

Published by Thriftbooks.com User , 15 years ago
I find this book hard to put down and must stop because my eyes tire. It is a well written, entertaining, informative overview of what has gone terribly wrong with so much modern Christianity with its focus on large mega churches, of a Church that tried to indfuence its culture and was eclipsed instead, of so many of us who are looking for a way out of Pop Christian culture and a way back to our roots as disciples of Jesus. Our feel good, God wants you to be rich, and lives of cheap grace leave us anchored to the shallow end of the ocean out waiting victims of the next spritual sunami.

A Call For Change!

Published by Thriftbooks.com User , 15 years ago
I am a youth pastor of nearly 15 years and have seen culture shape our youth for too long. It is now a part of the evangelical church as Dick Staub points out. This book is a call for Christians to change culture. As the church grows in numbers is it growing spiritually and changing the culture around it? This and others questions are discussed in this thought provocking book. Recommended if you see a need for change in as he calls it "Christianity-lite". Up there quite possibly with A.W. Tozer, C.S. Lewis, Francis Schaeffer and others who made a call for us to shine our lite in culture through arts, music, literature, and every aspect of life. A book every Christian should read! The time is short!

a timely and prophetic challenge

Published by Thriftbooks.com User , 15 years ago
I found Savvy Christian very timely and insightful, personally and professionally. Staub suffers no fools or foolishness when addressing "Christianity-Lite" trivializing of the Arts and giving more credence to marketing, popular culture and political power than the Gospel's call to meaningful, costly, even slow discipleship. For those of us who "consume" (my description, not Staub's) popular film, music, television, fiction, etc., he holds us accountable for being mindless sponges - just soaking up it all up with very little discretion or mindful discernment. But he doesn't do this in a mean-spirited or prudish manner - he wants us to be alert, informed and actively engaged in appreciating goodness and truth in the Arts and recognizing delusion and untruth when they creep in. For the artist, Staub challenges us to be fully Christian, walk boldly into the cultural marketplace, to hear the groans and joys of our fellow humans, and never be fearful of following the call to write, sing, dance, paint and act. Faith has altered our DNA: Grace has made us Aliens. But we're also God's artistic Ambassadors giving glimpses of beauty, wonder, healing and truth to people buying knock-off joy and peace. I recommend the book for artists and readers wanting to grapple with living in / amongst our cultural influences. I'd especially recommend it to parents and church leaders who are in a position to help kids and congregations develop appreciation and discerning skills regarding the Arts, rather than cultural exit strategies that create a reactionary, fearful and cocooned Christian. And bad "Christian" Art.
Trustpilot
Copyright © 2022 Thriftbooks.com Terms of Use | Privacy Policy | Do Not Sell or Share My Personal Information | Accessibility Statement
ThriftBooks® and the ThriftBooks® logo are registered trademarks of Thrift Books Global, LLC