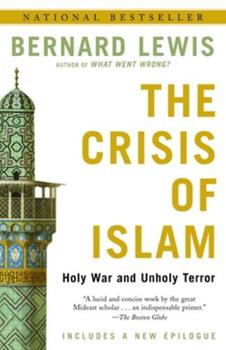 The Crisis of Islam: Holy War and Unholy Terror

In his first book since What Went Wrong? Bernard Lewis examines the historical roots of the resentments that dominate the Islamic world today and that are increasingly being expressed in acts of terrorism. He looks at the theological origins of political Islam and takes us through the rise of militant Islam in Iran, Egypt, and Saudi Arabia, examining the impact of radical Wahhabi proselytizing, and Saudi oil money, on the rest of the Islamic world...

Published by Thriftbooks.com User , 15 years ago
First of all, Lewis'"Crisis of Islam" is not about the Iraq War or George W. Bush. Secondly, it is NOT an anti-Islam, anti-Arab, pro-Western polemic. For example, Lewis writes that: (1) "The expulsion of religious minorities is extremely rare in Islamic history - unlike in medievel Christendom, where expulsions of Jews and, after the Reconquest, of Muslims were normal and frequent. Compared with European expulsions, 'Umar's decree was both limited and compassionate ... And unlike the Jews and Muslims driven out of Spain and other European countries, to find what refuge they could elsewhere, the Jews and Christians of Arabia were resettled on lands assigned to them ..." [xxix-xxx]. (2) "To most Americans, bin Laden's declaration is a travesty, a gross distortion of the nature and purpose of the U.S. presence in Arabia. They should also be aware that for many, perhaps most Muslims, the declaration is an equally grotesque travesty of the nature of Islam, and even of its doctrine of jihad. THe Qur'an speaks of peace as well as of war" [xxxii]. (3) "During the centuries that in European history are called medieval, the most advanced civilization in the world was undoubtedly that of Islam" [29]. (4) "Fighters in a jihad are enjoined [by the Qur'an] not to kill women, children, and the aged unless they attack first, not to torture or mutilate prisoners, to give fair warning of the resumption of hostilities after a truce, and to honor agreements ... At no point do the basic texts of Islam enjoin terrorism and murder" [39]. (5) "There were certainly major negative consequences of imperialism and more broadly of Western European influence ..." [58]. (6) "There is some justice in one charge that is frequently leveled against the United States, and more generally against the West: Middle Easterners increasingly complain that the West judges them by different and lower standards than it does Europeans and Americans ... Sometimes, even where American interests are concerned, American governments have betrayed those whom they had promised to support and persuaded to take risks" [107]. (7) "Most Muslims are not fundamentalists, and most fundamentalists are not terrorists ..." [137]. (8) "All these different extremist groups sanctify their action through pious references to Islamic texts ... They are, however, highly selective in their choice and interpretation of sacred texts" [138]. (9) "Islamic jurisprudence is a system of law and justice, not of lynching and terror" [141]. (10) "Can [the attacks of 9/11 and other similar actions] in any sense be justified in terms of Islam? The answer must be a clear no ... [such attacks] have no justification in Islamic doctrine or law and no precedent in Islamic history ... These are ... acts - from a Muslim point of view - or blashphemy" [154]. The whole thrust of the book, in fact, is that the extremism of today is a result of a particular sect of Islam, Wahhabism, which arose in the past two hundred

Must Reading for Troubled Times

Published by Thriftbooks.com User , 17 years ago
I have always recognized that despite what I consider to be my wide readings in History, I had a significant knowledge deficiency with regard to the Middle East, and so I belatedly starting looking around for a relatively brief work which would provide at least some useful background in which to evaluate current world events. Having just read this small but incredibly informative book, I conclude I found the right one. The other reader reviews have detailed the contents sufficiently that I just wish to add that this wonderfully concise and well-written work could not have been produced by someone lacking the profound knowledge of the subject and erudition of Professor Lewis, and that it would be as much of a pleasure to read purely as literature than for more prosaic purposes. If the motivations and objectives of Islamic terrorists are a little foggy in your mind, as they were in mine, do yourself a favor and buy this book ASAP. The only downside is that the story likely has no happy ending.

Published by Thriftbooks.com User , 18 years ago
This is the second book the distinguished Bernard Lewis has put out since 9-11. In the first -- "What Went Wrong" -- he sought to explain the failure of Middle Eastern societies to modernize and, as a result, how those societies responded towards the West, which had successfully modernized. While there is some overlap with the themes in the first book, in "The Crisis of Islam" Lewis focuses his attention on the dominant religion of the Middle East, and seeks to explain how history influences relevant modern themes in Islam.After defining the religion, and showing how much of the West's current problems with terrorism in the Middle East is a result of an ongoing war among competing visions in Islam, Lewis then gives a brief history of the term "jihad" and how the Islamic world has perceived the West (America, in particular). He also describes the roots of so-called Islamic "fundamentalism", explaining the success of Saudi Arabia's promotion of the Wahhabi sect, and its unfortunate consequences for Islam as a whole. Lewis also writes a wonderful essay on the double standards in the West - particularly in the U.S. government -- towards Muslim countries, arguing that it feeds into Arab and Muslim resentment towards the United States. That the champion of freedom and liberty has allied itself with many of the region's dictators and autocrats who persecute them strikes some in the Middle East as the deepest and most unforgivable hypocrisy.This is a short book, and can be read in an evening, but it has a surprising comprehensiveness in its 164 pages. Lewis's scholarship has been condensed down to a fine sharp point. He has a talent for focusing on what's important and ignoring the rest. The only caveat I give for my recommendation is that little in this book is new for those who have read much of Lewis' work.

A powerful examination, not for beginers

Published by Thriftbooks.com User , 18 years ago
Bernard Lewis continues his lifetime devotion to teaching about the Middle East and Islamic culture in this all too thin volume. As in his last book, What Went Wrong, here again Lewis focuses on raising the average readers understanding of this crucial region and its history. Unlike many so called academics, who argue from polarized positions on CNN and FOX News, Lewis takes a complex and nuance approach to this most complex of regions. Indeed, while everyone else seems to either want to condemn all Islam and its culture or apologize for the terrorists it currently inspires, this author writes from a position of respect and appreciation for this civilization all the while refusing to be blinded by base sentimentalism. Looking through Islamic history, Lewis explains how a preoccupation with a loss of status and power, a world view looking to blame outsiders rather than looking inward for critical self-examination, and a lack of democratic tradition, continues to radicalize the Middle East. The author further seeks to explain how Islamic culture holds a different world view from those in the west and that we need to understand this world view if we are to confront the threat of terrorism.Readers should be aware that this text is not an introduction. Lewis does not write for laymen. Assuming a certain baseline of knowledge, he tends to gloss over arguments or offer evidence in a sort of short hand, expecting the educated reader to understand references and names. In a world where most non-fiction is over written, Lewis is a throw back to an earlier age, writing thin volumes that are light on detail and heavy on argument. This does not detract from the quality of his work, but it does limit what a reader without a firm grasp of the fundamentals can learn from reading it. Still, there is much to be learned from this work, in particular his examination of the Wahabbi sect being exported by Saudi Arabia and the traditional self understanding of Islam as an ?ascendant? religion that would spread over the whole world.Readers should also look to Lewis?s earlier work, in particular ?the Middle East: A Brief History? and ?Islam and the West,? both essential reading for someone whishing to understand the modern Middle East.

How'd we get here? Where might we be going?

Published by Thriftbooks.com User , 18 years ago
Bernard Lewis is a master of clarity. I must say I have not read any of his works other than his "Middle East," but the quality of these two books, combined with his general reputation make it clear that he is a giant in the field of Arab and Islamic studies. His grasp of history is phenomenal, and his ability to apply history to current exigencies is astounding."The Crisis in Islam" very neatly, but not simplistically, lays out the history of relations between the (mainly) Christian West, and the world of Islam, beginning with the generation of the Prophet up to the current times. It is critical to understand, and the brilliant introduction lights the way, that Muslim from birth see the world in metaphors that we can barely descrobe. The former American imperative of Manifest Destiny is a pale reflection of the inevitability many, but certainly not all, Muslim feel about the spread of the "Dar al-Islam" in the world. This literally translates as "House of Peace" and implies the eventual conquering and conversion to Islam of the entire planet, without room for compromise. All other "nations" and religions are within the "Dar al-Harb," literally "House of the Sword." No permanent peace can exist between the two houses. (Again I stress that this is NOT a universal attitude.) In Lewis' thesis, attitudes toward the West have evolved through contacts with first the Eastern Empire in Constantinople, then Spain, Portugal and France, and through years of direct conflict in the Crusades and the colonial wars of the 19th and 20th centuries. Combine this with the flourishing of multiple schools and "sects" within Islam, combined with chance vagaries of history, and you wind up with the hegemony of the Wahhabi school within the Kingdom of the Su'ud family (now Sa'udi Arabia). Then add the discovery of oil. Then add the poverty of most Arab Muslim people whose only access to any education is via Wahhabi supported schools and mosques, and you have a very heady recipe. While this is grossly oversimplified, it gives the barest skeleton of the first part of the book.To Lewis, the influence and philosophy of the Arab Wahhabis and Iranian Shi'ites make accomodation pretty much impossible. The West, especially the United States is seen as primarily a force for temptation and corruption. There are many surprise insights in the book; one big one for me was the revelation that the hostage crisis in Iran in 1979 was not due to the decline in relations between the two "Dar"s, but instead because there was a threat of 'rapprochement' which was seen as potentially corrupting. Another was the explanation of how democratic process is used by some as a tool to achieve power legitimately, then subverted in a method he calls amusingly the "One man (only men), one vote, one time" method. While popular demand may be for self-determination, the hard-liners (who are really NOT fundamentalists) have other agenda. And the West has done a pretty poor job making a cas
Copyright © 2020 Thriftbooks.com Terms of Use | Privacy Policy | Do Not Sell My Personal Information | Accessibility Statement
ThriftBooks® and the ThriftBooks® logo are registered trademarks of Thrift Books Global, LLC