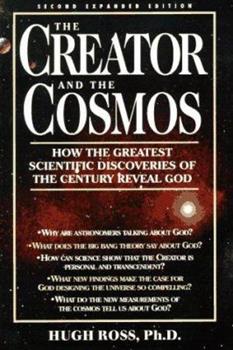 The Creator and the Cosmos: How the Greatest Scientific Discoveries of the Century Reveal God

Many Christians are threatened by scientific explanations of how the universe was created. But, as Dr. Ross explains, modern science has revealed a design for the universe that is surprisingly compatible with the Biblical account of creation. This book breaks down barriers of communication between faith and science and inspires a greater appreciation and understanding of our Creator.

leaves a lot to be desired.

Published by ric , 1 month ago
ross is an old earth creationist which leaves room for theistic evolution which refutes biblical inerrancy allowing for christians to think that evolution may be the way God created man... not fully scriptural at all, it can lead newer Christians astray

This is an excellent book on Old-Earth Creationism

Published by Thriftbooks.com User , 15 years ago
In the world today there are basically three views regarding creation: 1. On the one extreme is the view that there is no God, and that the world was created by natural causes. In this view, science holds the only answers. We must use our inquiring minds to learn the truth, and there is a constant search for better answers. 2. At the other extreme is the Young Earth Creations (YEC). They believe that all scriptures must be interpreted literally, and any science that contradicts a literal interpretation must be wrong, and they therefore dismiss all of science as incorrect, and attempt to define an alternative science where the speed of light changes. 3. There is the middle ground between these two. Proponents, such as Ross, take the view that the Bible is true, but that being men, our knowledge is never complete, and that therefore, while the Bible is never wrong, we must occasionally be flexible in changing our understanding of it. These people believe that God does not lie, and that therefore as we use science to learn about his creation, what we find will also be true, and consistent with his word. Therefore they attempt to reconcile science and the Bible, finding common ground in an old-earth creation (OEC) interpretation. Typically YEC do not get along with either group, viewing both as the enemy. According to their view, you are forced to choose to accept the Bible according to their entirely literal reading, or you must reject the Bible entirely. Faced with this choice many thinking people are driven away from Christianity, or at least are forced to deal with cognitive dissonance - On Sunday the Bible is true and science is ignored, but the rest of the week science is true and the Bible is to be ignored. By contrast there is typically more constructive dialogue and respect between the scientists and the OEC group. In the world today, most people believe that science is true. OEC provides an interpretation of the Bible that rconciles Science and the Bible. In my personal experience, when I attempt to evalgelize people with any level of scientific sophistication, they immediately prepare to attack and ridicule the YEC view. When I take the OEC perspective, they are always quite surprised to hear that the biblical account written 3000 years ago is consistent with science not discovered until recently. As a result, this book by Ross is an outstanding evangelical tool - it permits thinking people to be reached who reject YEC out of hand. This approach doesn't necessarily convert them, because in most cases their disrespect for YEC has led them to a hard-core atheistic view, but it does eliminate the major obstacle to their ultimate acceptance of the Bible. Basically, in evaluting this book, you have to ask - does this book lay out its view is a clear, convincing way. The answer is that it does. I'm not here to attack or defend one of the views above, but I can tell you that as a scientist, I am delighted to read books like this which help to

This is a Good Book

Published by Thriftbooks.com User , 17 years ago
I have made a lot or progress with this book and I have learned a lot from it. There are a few places where Ross gets a little bit more into Physics than I want to get into, but they are easy to skip over. There are chapters in this book that in and of themselves make it worth the while to make the purchase. The main thing is the book is a LOT better than the critics claim. In their hatred of God they would try to lead you to believe that their is nothing of any substance to be found here and that is not true at all. There is a lot to be gained from reading this book and it is well worth it.

Published by Thriftbooks.com User , 18 years ago
Dr. Ross does a fantastic job presenting the latest scientific discoveries and their implications.

Finally A Creation Story That Fits the Data

Published by Thriftbooks.com User , 23 years ago
As a professional scientist with a background in both biochemistry and computer science, I have been struck with the arcane stories that otherwise logical scientists have posited to account for why the earth is the way it is, and why there is life on it. While they will generally agree on principles of thermodynamics, entropy, and the matter/energy/time inter-relationships that we now hold as scientific fact, they are particularly more "open minded" when it comes to non-theistic theories regarding the origins of life or the universe. In fact, it would seem that for years, concepts like an "ageless universe" and evolution have become very ingrained in much of the scientific community. In fact, logic seems to have been entirely abandoned by evolutionists that ardently deny creationism; even a marginal thinker eventually realizes that the only significant difference between the evolutionist view and creationist view is the number of creation events. Modern cosmology and origin of life theories the presume no divine element can be characterized generally as speculative and largely unsupported, BUT these very same notions together have become somewhat of an alter-religion in itself that seems to create quite a few believers of ardent faith (see other reviews of this book by those offended at Dr. Ross's view).Dr. Ross introduces the reader to a number of modern superstitious cosmology arguments and clearly shows how the latest advances in mathematics, physics, and astronomomy (particularly the dramatic discoveries of the Hubble telescope) do not support the modern alter-religion's notion of the universe. In fact, he takes the argument a step further and makes what I found to be a stunningly compelling case for the model set forth some thousands of years ago in the bible. Engaged by this notion when I first read this book some years ago, I conducted my own investion of these same matters and came to similar conclusions as Dr. Ross. I have always felt that science is at its very best when it evokes a sense of the divine. Indeed anyone reading this book may think much differently about the universe after reading the book than before. Since Dr. Ross wrote this book, several new books have been published on the same subject supporting Dr. Ross's perspective, and in fact there has been much more scientific evidence dug up that points that way. Perhaps it will not be long from today that in critical and intellectually rigorous circles, a writer may risk his or her credibility more by attempting to refute Dr. Ross's Christain view of the universe than by simply agreeing with it.There have been some minor disputes over whether Dr. Ross took some conclusions too far or misused a contant in some way. I have seen many of these objections and can say that some seem quite valid, some not valid, and many I just cannot tell because I'm not a mathematician. No matter, because even if every argument raised was conceeded by Dr. Ross

Published by Thriftbooks.com User , 24 years ago
I thoroughly enjoyed reading this book and think it is Dr. Ross' finest work. His interaction with COBE, Hawking, Einstein, etc. shows that cosmology has certainly been yielding results that Christian theologians have long advocated. Namely, that the universe began to exist and was caused by God. One previous reviewer mistakenly refers to this philosophical argument as a design argument -- it is clearly a cosmological argument. He/She likewise asks about who caused God. As this question is very boring and has been answered for years, I'd just like to point out that God by definitioin never began to exist. Rather, God has always existed. So, God doesn't need a cause to bring Him into existence. But, the universe has never always existed. What caused the universe to begin to exist? Another reviewer brings a question concerning Dr. Ross' exegesis of Gen. 1:1. Gen. 1:1 speaks of God creating the entire physical universe. The Heb. meaning of heavens & earth hooked together in verse 1 (shamayin & eretz) = entire physical universe. You can check this with the Hebrew lexicons and with OT scholars such as John Sailhammer. Also, Dr. Ross' summary of the many constants that must be "fine-tuned" for the universe to contain intelligent life is largely based upon other massive studies that have looked at the so-called anthropic principle. Even the agnostic Stephen Hawking admits this in his A_Brief_History_of_Time. One ought to check Barrow and Tipler's massive work The_Anthropic_Cosmological_Principle before waving this evidence aside with a few remarks about God not being proved scientifically in journals. Finally, one reviewer thinks that Dr. Ross' views on the origin of death and sin has been challenged as unbiblical by "young-earth" creationists. "Young-earth" creationists hold to the idea that after Adam & Eve sinned in the Garden, physical death came into being in the universe. This is certainly a popular "view" of what the Scriptures teach but it isn't necessarily explicit. In fact, one large error occurs in this popular view -- could Adam & Eve have obtained eternal physical life if they ate from the Tree of Life instead of the Tree of Knowledge of Good & Evil before the Fall? In other worlds, if the Tree of Life was available to them before the fall, how can they obtain something they supposedly already had (eternal physical life)? In summary, this book is certainly a fine one to discuss for both Christians and those of other persuasions.
Trustpilot
Copyright © 2022 Thriftbooks.com Terms of Use | Privacy Policy | Do Not Sell My Personal Information | Accessibility Statement
ThriftBooks® and the ThriftBooks® logo are registered trademarks of Thrift Books Global, LLC