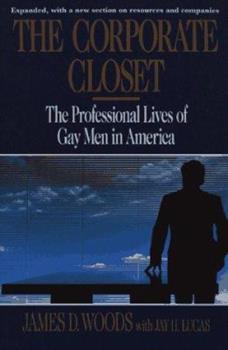 The Corporate Closet: The Professional Lives of Gay Men in America

Examines the stragies gay men have developed to manage their sexual identity within the context of a heterosexual corporate culture and discusses the consequences and benefits of their choices. This description may be from another edition of this product.

The Consequences of Each Choice

Published by Thriftbooks.com User , 16 years ago
"Examines the professional lives of gay men, exploring the various strategies they have developed for managing their sexual identity--from disguising or revealing it to avoiding the subject altogether. Studies the consequences of each choice."--© zebraz

NO STRAIGHT PERSON SHOULD BE ALLOWED TO READ THIS BOOK EVER!

Published by Thriftbooks.com User , 19 years ago
This book is a study of the tactics that gay men use to keep their sexual orientation hidden from their (often homophobic) co-workers. It scares me how accurate it is. Let me give you an example, I once had a male teacher who said, "I was once going out with this woman who blah, blah, blah." Well, many straight people would think, "Okay, girlfriend equals straight." But a critical reader would see that the man said, "Once!" Many openly gay men used to date women. This book mentions tactics like acting weird so that co-workers just dismiss you as asexual, emphasizing your love of sports in order to hide the fact that you're not involved with a woman, being so liberal that when you mention gay rights co-workers think you are a leftist rather than gay, etc. If straight people read this book, gay men would never be able to hide. This book was both a gift and a weapon. Some have critiqued it asking why anyone would want to study, and subconsciously encourage, men to be closeted. However, this book does talk to men about their being out in the workplace and how they did it. We need more studies like this. I thoroughly enjoyed this book. However, it could be incredibly dangerous if placed in the wrong hands.
Trustpilot
Copyright © 2022 Thriftbooks.com Terms of Use | Privacy Policy | Do Not Sell My Personal Information | Accessibility Statement
ThriftBooks® and the ThriftBooks® logo are registered trademarks of Thrift Books Global, LLC