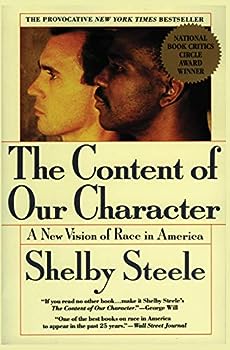 The Content of Our Character: A New Vision of Race In America

This description may be from another edition of this product. In this controversial essay collection, award-winning writer Shelby Stelle illuminates the origins of the current conflict in race relations--the increase in anger, mistrust, and even violence between...

Published by Thriftbooks.com User , 17 years ago
Shelby Steele's "The Content of Our Character" is not just a book for African-Americans. It's for anyone who wants to live a better life. When I read this book I felt like he was speaking to me, individually, as a man and not as a member of a racial category. Especially valuable are his insights on self-sabotage, and the true sources of self-esteem. All of us have our own demons to face and Steele's wise counsel is invaluable in that struggle. You should approach this book in the spirit of Epictetus, or Benjamin Franklin. It really is in that same class.

Published by Thriftbooks.com User , 19 years ago
Prior to reading THE CONTENT OF OUR CHARACTER, one will find it helpful to know something about Sheby Steele's background. He has a Masters in Sociology and a Doctorate in English Literature. As a result, we find a well-written book with profound sociological insights. Generally speaking, sociologists are not well known for being good writers. Steele is clearly the exception.From a sociological perspective, Steele employs an ecological system model as a tool to capture his personal experience enabling the reader comprehend his emergence into manhood in a racially biased society. Yes, I admit my description sounds like a bunch of academic hogwash. However, Steele masterfully strips away the academic jargon to create a meaningful book that everyone can grasp without being diverted by theoretical language. His use of a theory as a backdrop provides the reader with a connection - a meaningful experience. For several decades, sociologists have been attempting to link personality with the social structure in a manner that has some practical and meaningful application. Up to this point, all attempts have been miserable failures. Here lies Sheby Steele's great success. He created this important theoretical linkage hitherto unseen in American social science.What value does THE CONTENT OF OUR CHARACTER offer us? Steele brilliantly portrays race relations as a connection between the micro and macro human experience. In many ways, Steele succeeded to do what Parsons dreamed about in the 1940's. Steele identifies that racial problems cannot be solved merely by instituting (macro) policy change. He states that everyone has a personal (micro) responsibility to embrace the role of change agent. Most interestingly, his primary focus is directed toward African American individuals. Change yourself and change society simultaneously.This is one of the most readable books on race relations. I often assign college students (even minority students) to read this book. The book seems to change they way they think. They become more thoughtful and work harder as students. I find the effects of this book quite amazing.

Among The Very Best Books on Race in America

Published by Thriftbooks.com User , 21 years ago
Steele's deeply absorbing "The Content of our Character" should be required reading for every American. His frank analyses of the problems which beset black Americans is honest, and also sympathetic and constructive as well. (Of course, these days any "self-help" approach regarding African-Americans is castigated as "Uncle Tom-ish" and unsympathetic-- is it any wonder that the problems remain?). Steele infuses psychological theories into his arguments, which seem as plausible as anything I've ever read on the subject. Anyone who argues against his position would seem to favor the entrenched "victimization" stance for blacks, a position which Steele correctly notes is probably the most hurtful element to the black community's struggle for upward mobility-- certainly more hurtful at this point in time than actual racism. Steele lends humanity to the black struggle against "inferiority anxiety" by accurately identifying it and laying it on the table. It is unfortunate that his detractors unwittingly perpetuate the tragic socioeconomic disparity between blacks and whites by refusing to give credence to "reform liberal" intellectuals like Steele. As he says, only positive action, the right values, hard work, and sacrifice have ever lifted any ethnic community out of poverty, regardless of the degree and kinds of oppression imposed upon them. Isn't that the bottom line? It's too bad that we may never see a wholesale positive change in the African American community, simply because their dubious leaders frantically search for "the pea of racism under twenty mattresses," rather than go into the inner cities and encourage the right (i.e., old-fashioned) values, attitudes, and action. Some critics believe that Steele is trying to "hustle" whites by appealing to their racist notions of blacks. This is not so. If you ask me, "leaders" like Jesse Jackson, Cornel West, Skip Gates, and others are the "hustlers" who actually perpetuate the problem by citing racism, victimization, and the legacy of slavery at every turn. As Steele points out, such leaders keep blacks dependent on government support by fixing them on the notion that they are helpless victims of racism, that racism is solely to account for their problems, and that their problems will disappear when society fixes itself. Go ahead and find an example of the aforementioned "leaders" ever discussing strategies of self-help for blacks. They rarely do, and when forced to address it the resulting "eggshell walk" is always both frustrating and amusing. And why? Because if Jesse, Cornel, Skip, Sharpton, and their ilk actually offered constructive criticism and strategies for self-help to the problems of the black underclass, they would be dropped by many blacks (genuinely) and white liberals (publicly), and lose their power and influence. Besides, if black socioeconomic problems disappeared tomorrow, they'd all be out of a job. Shelby doesn't seem t

One of the jewels on my shelves

Published by Thriftbooks.com User , 22 years ago
Like many concerned Americans, I have spent decades discussing and reflecting on the racial troubles in our past and present, and have read numerous books that explore the topic. When published, this book was a long-needed tonic, notable not only for its fresh perspective and searching, reasoned tone, but for the personal honesty of its author, an honesty which even critics admitted. How sadly ironic therefore that one reader above is reduced to defaming the author as "dishonest," "obscure," "second-rate,", without "consequence, " seeking only "fame," a "charlatan" engaged in a "hustle." Would you like a better understanding of the state of a reader who, driven to disagreement with this author, can do no better than sputter insults and defamations, who CANNOT COME TO TERMS with the content of "Content of our Character?" To you I recommend the book.

A must-read book on race relations

Published by Thriftbooks.com User , 23 years ago
This is the single most important and relevant book I've ever read on race relations, and even human relations, and one of the most extraordinary books I've ever read in my life. The premise that playing the role of victim hurts blacks in the long run extends far past race relations into everyday life for all individuals - any person who blames the establishment for their lack of success or opportunity is less likely to overcome circumstances and rise above their station, whatever it may be. That person must draw on internal resources and strength, as well as support from others, to fulfill their potential. And s/he must resist the urge to play the role of victim, because that will only hold her/him back. This insightful author also doesn't suggest that African Americans deny their ethnicity, he encourages them to embrace it in positive ways without forcing whites to *only* see them as blacks. There are so many important points made in this book that a review of it could go on for pages, so I'll end with this final comment: if you are at all interested not just in race relations, but in how any victim relates to others (whether those other people are to be blamed or not for their plight), you absolutely must read this book. It should be in every classroom in every school in America - starting with middle school. This book could have a significant impact on the way all Americans view race relations.
Copyright © 2020 Thriftbooks.com Terms of Use | Privacy Policy | Do Not Sell My Personal Information | Accessibility Statement
ThriftBooks® and the ThriftBooks® logo are registered trademarks of Thrift Books Global, LLC