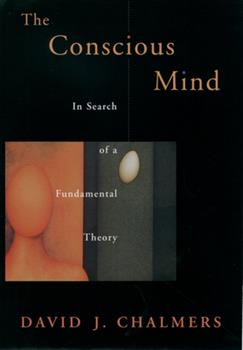 Conscious Mind in Search of a Fundamental Theory (Revised)

What is consciousness? How do physical processes in the brain give rise to the self-aware mind and to feelings as profoundly varied as love or hate, aesthetic pleasure or spiritual yearning? These questions today are among the most hotly debated issues among scientists and philosophers, and we have seen in recent years superb volumes by such eminent figures as Francis Crick, Daniel C. Dennett, Gerald Edelman, and Roger Penrose, all firing volleys...

Published by Thriftbooks.com User , 15 years ago
A bunch of us (PS Churchland, PM Churchland, Dan Dennett, Frank Jackson, Colin McGinn, Joe Levine ,Tom Nagel, John Searle, Jaegwon Kim, and many others) have been writing about how to understand how talk of *mind* and talk of *brains* connect and if, and in what sense, mind *is* brain. Dave Chalmers breaks out of the crowd & makes us rethink everything. I am on record as not thinking the *hard problem* is as hard as Dave does; but read Chalmers for the argument that I ( & most others underestimate) the difficulty. I think also that the move from conceivability (of zombies) to possibility is a problem. The fact remains that this is the most important work in consciousness studies in recent years. One small thing: one reviewer of my *Consciousness Reconsidered* complains that I don't respond to Chalmers. This is true. My defense: my book appeared 4 or 5 years before Dave's. It would have been hard to respond to him.

Published by Thriftbooks.com User , 16 years ago
"The Conscious Mind" is the most influential of contemporary works on the problem of consciousness. Indeed, it may be the finest book ever written in the philosophy of mind. Chalmers presents and defends a number of arguments against reductive physicalism, the view that mentality is an entirely physical or material phenomenon. He argues that phenomenal properties - the felt qualities of conscious experience (eg. the feeling of pain) - are not physically reducible and cannot be reductively explained in physical terms. His central argument is from the logical possibility of zombies, creatures physically identical to us but lacking phenomenal consciousness. If there is a logically possible world that is physically identical to our world but in which our physical counterparts lack phenomenal consciousness, then there is more to the actual world than the physical, and phenomenal consciousness is not physical. Chalmers does not argue for substance dualism, the view that there are physical substances and nonphysical substances, bodies and souls. Rather, he settles for property dualism, according to which there are physical properties and physically irreducible phenomenal properties. Nevertheless, Chalmers argues that the phenomenal properties depend upon the functional organization of physical systems; there are psychofunctional laws relating phenomenal consciousness to functional organisation. Thus he defends the theory of strong artificial intelligence: appropriately organized functional systems will give rise to consciousness. I suspect that Chalmers is correct that phenomenal consciousness is not physically reducible, but I also have doubts about his argument. For a physicalist response to Chalmers, readers may be interested in Perry's "Knowledge, Possibility, and Consciousness". On the other hand, for a defense of substance dualism from conclusions that are similar to those of Chalmers, I recommend Foster's "The Immaterial Self". Chalmers has tried to write a book that is accessible to those unfamiliar with the subject; however, he notes that some technical sections will be very difficult for them to follow. In my opinion, many sections will be difficult to follow for those unfamiliar with analytic philosophy of mind. Nevertheless, such readers may (or may not) still get the main point of the book. "The Conscious Mind" is ambitious and engaging, written with clarity and great originality. I highly recommend it for anyone interested in pursuing contemporary analytic philosophy of mind or the problem of consciousness.

Published by Thriftbooks.com User , 16 years ago
As a mathematician trying to get in step with mainstream analytic philosophy, I've found this book more useful than any other. Many of the issues Chalmers has helped me to get clear about have little to do with philosophy of mind. For example, his quick rendition of 2-dimensional semantics, while paying its due respects to Kripke, Putnam et al., quietly makes the dogmatic style of, say, Naming and Necessity or The Meaning of Meaning look pretty silly, things that many of us felt but couldn't clearly express. (I don't actually subscribe to any of this 2-d stuff, but that's beside the point. That Chalmers can so effortlessly demythologize a basically empty doctrine by characterizing it from within a far more cogent system is just wonderful.) Not all of that is his, but some of it is, and his modal judgment is absolutely outstanding...actually, I would prefer to see a book about just this from Chalmers, as therein lies his principal expository strength (more so than mind). His references, meanwhile, manage to be copious without the usual pretension. Something else to consider--Chalmers was like 28 when he wrote this book, and it's probably fair to say he was something of a prodigy (bit of trivia--he was also a medalist at the International Mathematical Olympiad). At any rate, what's here is brilliant, if a bit on the sterile side. In short, the technique is way ahead of the art. Focus on the technique and reap the rewards.

one of the best books in philosophy of mind

Published by Thriftbooks.com User , 19 years ago
This is an incredibly important book, as it cogently & decisively challenges a view of mind that is something of a received dogma in philosophy of mind, namely, materialism/physicalism. Chalmers is machine-like in tearing down the superficially strong but ultimately weak arguments from the materialist side. Any impartial reader will come to the conclusion that something is very wrong w/ materialism; the only ones who will deny this are those in the hold of the dogma themselves.Reading through the other reviews here, I have noticed several criticisms the indicate that the reviewer did not read the book in its entirety. For example, one review complains that Chalmers does not recognize the difference between conceivability & possibility, when it fact a significant chunk of the book is devoted to exactly that distinction, w/ Chalmers making it quite clear why the distinction is irrelevant to his argument.One methodological advantage of the book, by the way, is that it is readable by people w/ all levels of philosophical background. Sections that are largely technical are marked w/ an *, and the book is structured so that these sections can be skipped w/o losing the main story & argument of the book. Beware, however, of attempting to critique Chalmers' view on technical philosophical grounds without reading the * sections (as the reviewer mentioned above seems to).Anyway, this is a well-written, important book by one of the most interesting & exciting philosophers around. Anyone interested in philosophy of mind or cognitive science will do well to own it.

An honest look at the "hard problem" of consciousness

Published by Thriftbooks.com User , 24 years ago
The basic problem with any materialist theory of consciousness is that there is no room for consciousness to *do* anything -- it is caused by certain material processes but does not itself cause anything. The firing of a neuron can always be explained in terms of the firing of other neurons, the impingement of a photon on a photoreceptor, or some other objectively observable cause. At no point is it necessary to say that "this neuron fired because the brain it was part of had such-and-such a subjective experience". Thus consciousness is not logically necessary in our objective description of the material world, so we can at least conceive of a world where David Chalmers' zombie twin writes papers and books about the mind-body problem without ever having any subjective experience itself. This seems absurd but the absurdity is inherent in all the various flavors of functionalism or property dualism. And "new physics" won't change the picture at all -- string theory, quantum gravity, quantum multiverses, and any as yet unconcieved of physical theory are all simply more of the same kind of "ontological stuff" that we already have -- objective procedures for predicting the behavior of objectively measurable things.Some functionalists attempt to make the problem go away simply by declaring conscious states a matter of definition -- "pain" is some set of states of an information processing system, "pleasure" is some other, etc. Thus whether a robot that makes a convincing whine when you hit it actually experiences pain is a matter of definition. Few would deny that there is indeed a correlation between neural states and subjective experience, but anyone who has actually experienced pain knows that it is more than a matter of definition -- your pain won't go away just because everybody else on the planet has redefined your neural state as pleasure. Finally, substance dualism, for good reasons not considered seriously by most philosophers, doesn't solve any of the problems but merely hides them behind a black screen.Chalmers recognizes the absurdities inherent in all theories of consciousness. He refuses to sweep the problems under a rug; he argues for a form of property dualism while being honest enough to point out that it leads to the bizarre conclusion that we puzzle about the nature of consciousness for reasons that have nothing to do with the fact that we actually *are* conscious. Like me you probably won't be willing to go as far as Chalmers wants to take you, but his book makes it plain that all the apparent avenues of escape lead to pitfalls at least as bad as the ones on the road he takes. If Chalmers is right, and consciousness must be added as an "extra feature" in our description of reality, it is devilishly hard to see how we will ever have a good theory of it. How will we be able to convincingly determine whether that poor robot really hurts? The book is very clearly written; you don't need
Trustpilot
Copyright © 2022 Thriftbooks.com Terms of Use | Privacy Policy | Do Not Sell My Personal Information | Cookie Preferences | Accessibility Statement
ThriftBooks® and the ThriftBooks® logo are registered trademarks of Thrift Books Global, LLC