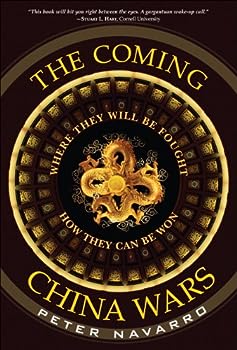 The Coming China Wars: Where They Will Be Fought And How They Can Be Won

For years, China has served as the "factory floor" for global production, driving down prices for consumers worldwide. But, unfortunately, China's rapid and chaotic industrialization has put it on a... This description may be from another edition of this product.

Published by Walter Ko , 1 year ago
Do you trust marginal economic UC-Irvine professor Peter with no back ground on Chinese language, culture and history comment ed on war with China? Publisher's note - in this book various quotes and viewpoints are attributed to a 'Ron Vara'. Ron Vara is not an actual person, but rather an alias created by Peter Navarro in order to present his views and opinions. Who fleece Chinese cheap labors profit? GM, Apple, ? He is the chief hawk to get Trump in trade wars with China. American family pays extra $1200 for this tariff! His term in Trump administration will be over soon. Do not spend your time and money for this sensational baloney!

Published by Thriftbooks.com User , 14 years ago
This book is a most informative book detailing the causes of the massive changes taking place in the western world today through the agency of China. China is affecting everyone. A must read book. Wayne Butcher

politics aside - this book makes you think

Published by Thriftbooks.com User , 14 years ago
Try to look past the author's political bias and you'll find that it really is an in-depth analysis. It is very very well researched. Regardless of how we feel about the country, facts are facts. This book should be read by everyone who wishes to understand China's challenges as it is about to enter and lead the modern world. The country is obviously quite complex and I imagine there will be plenty of info here that even most Chinese readers will find novel, surprising (and in some cases disturbing). This book should be read as a compilation of challenges facing China (even though its difficult to do with the author's negative tone).

Published by Thriftbooks.com User , 15 years ago
This book will give you a look at China you probably did not know. Other books you might have read praised China for its economic growth; but at what cost? The author will show you the evil side of China. According to the author, China is using slaves. Some corrupt organizations are employing unpaid workers, satisfying them only with food and shelter. When such `slaves' try to rebel, asking for wages to be paid, they are quickly quieted down by corrupt police. The police also sometimes hire gangsters to threaten and scare these `slaves'. Over the past decade, the number of protests and riots in China has risen to nearly 100,000 annually. People are being pushed beyond tolerance as the Chinese countryside becomes a slave labor camp and dumping ground for every imaginable pollutant. The peasantry is being sucked dry by government tax collectors. Corrupt local government officials seize land on behalf of developers, pocket the monies that are supposed to compensate villagers, and then enlist local gangsters to quell protests. In the big cities, unpaid construction workers leap to their deaths in protest of wages that go unpaid. Furthermore, the Chinese government imposes few health and safety or environmental regulations on its corporations. What rules do exist are only weakly enforced, evaded, or simply ignored. These events might ignite an internal war within China; within its own people. After all, as the Chinese know well, it takes only a spark to ignite a field. China has become the world's largest pirate nation. Chinese modern buccaneers, with the strong support of their government, are not just stealing software and Hollywood movies on DVDs. They are counterfeiting the entire alphabet of goods--from air conditioners, automobiles, brake pads, razors, refrigerators, and the world's most recognizable pharmaceuticals such as Lipitor and Viagra. This is posing grave health risks to hundreds of millions of people. The author asks the reader to consider the following: Your father almost dies from a massive heart attack because the "Lipitor" prescription he filled on the Internet was laced with Chinese fakes; and your mother breaks her hip because the phony medication she took for osteoporosis was nothing more than molded Chinese chalk. Counterfeit drugs kill people! Even Harry Potter novels are counterfeit. In one counterfeit version, Harry Potter gets turned into a fat dwarf! Furthermore, we've all heard of laptop batteries exploding. Those batteries were manufactured in China. China is destroying the global intellectual property law protections vitally needed to spur innovation, and is costing international corporations billions of dollars in lost revenue per year due to piracy. Is this fair? Should the world do nothing about this? China has now emerged as one of the world's biggest dope dealers, exporting cocaine, heroin, methamphetamine, and Ecstasy worldwide. As a result, China's banking system is becoming an important hub for global money

Published by Thriftbooks.com User , 15 years ago
Anyone interested in the global environment and economics will find this book and the data/citations found in it, valuable. Not the type of book that would probably interest an expert in international economies but a very good introduction to a wide range of cause and effect relationships. More importantly, it raises one's awareness of strategic and political approaches being taken by China toward other countries around the globe. I rate the book excellent.

China has a lot of problems

Published by Thriftbooks.com User , 15 years ago
In the past few years there have been a number of books on how China will take over the world. A few years before that, it was going to be Japan that was going to take over the world. Japan kind of self destructed. China is on the rise, but as this book points out, it has a series set of problems just like the rest of the world. While this book points out a lot of the problems, I want to discuss just three: Centrally directed economies like China have not done well in the long run. The best the central planners can do is not as good as the free market does. We have seen this over and over, in the Soviet Union, in Japan and other places. In a centrally planned economy, the penalty for failure it too high, so no decisions get made. Oil usage in China is on a rapid rise just as the world has reached or is reaching peak oil production. There will be less oil produced in the future. Yes, there will be fighting over oil, but that is only to argue about who gets a bit more and who gets a bit less. In the long run, oil is going away. Dr. Navarro mentions internal strife. I don't think he stresses it quite strong enough. Remember that China had two revolutions in the twentieth century. Why not a third, and maybe a fourth in the 21st. Again he mentions, but I don't think gives enough strength to the Muslim problem in China's western provinces. All and all an excellent overall view. The few problems I mention here are nits when compared to the overall excellence in his understanding and explanation of the current Chinese problem areas.
Trustpilot
Copyright © 2022 Thriftbooks.com Terms of Use | Privacy Policy | Do Not Sell or Share My Personal Information | Accessibility Statement
ThriftBooks® and the ThriftBooks® logo are registered trademarks of Thrift Books Global, LLC