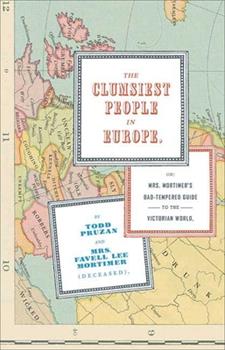 The Clumsiest People in Europe: Or, Mrs. Mortimer's Bad-Tempered Guide to the Victorian World

A caustic, cranky, and inadvertently hilarious look at foreign countries and their customs by a Victorian woman who rarely left the house. No matter who your ancestors were, and where they had the misfortune of living, Victorian children's book writer Mrs. Favell Lee Mortimer had something nasty to say about them. Their faults, according to Mrs. Mortimer, might have amounted to just about anything. The Irish "are very kind and good-natured when pleased,...

Published by Thriftbooks.com User , 15 years ago
Now that we live in the 21st century, 150 years since Favell Mortimer (nee Bevan) wrote her descriptions of the rest of the world, I guess it is safe to give this book five stars. On the other hand, if I thought that the contents of the book were going to be taken as, um, gospel by the readers, I would give it only one star. The five stars are basically for Todd Pruzan, not for Favell Mortimer. Just who are the clumsiest people in Europe? According to Mortimer, the Portuguese! Didn't you all know that? I sure didn't. And what's the most beautiful city in the world? Well, it's Edinburgh. That green hill with the castle on top surely gives it an advantage over, say, Copenhagen! And what is the wickedest city in the world? It certainly gives a different meaning to the line "I left my heart in San Francisco." Which people are the drunkest? Oh, never mind. You can find out so much about all sorts of, um, strange and faraway people. Such as Icelanders, Greenlanders, Sicilians, Ostyaks, Tartars, Affghans (I'm using Ms. Mortimer's spellings here), and so on. Yes, it is an amazing book. Still, it has its share of facts to go along with the nonsense, all stated by Ms. Mortimer with an air of supreme confidence in spite of her actual failure to have visited any but a couple of the places she describes. In addition, it has a constant viciousness that leaves an unpleasant aftertaste, especially when one takes into account the fact that this material was originally designed to be consumed by young schoolchildren. I think we would all do well to realize that it really is wrong to come up with such works and feed them to impressionable children. When I lived in England, over fifty years ago, I did have a look at a number of books about the rest of the world, including some children's books. Some of the books had been written as recently as 1950, but others were from several decades earlier, and the things they said about the United States were often pretty funny. I can see how this book fits in with some of what I saw in England back then, and I can also see how it can help give misleading impressions about foreign nations to plenty of youngsters. Even though we do grow up and learn more accurate information about places, some of the overall attitudes we may have about other nations can be greatly distorted by the things we're told when we're very young. Should we be careful not to produce works of our own that have the same sorts of problems as those which Ms. Mortimer wrote? Absolutely. And I hope that in the year 2150, the works of, say, Ed Said will be read with the same roars of laughter that now accompany the readings of Ms. Mortimer's contributions.

Published by Thriftbooks.com User , 16 years ago
Since yours will keep getting stolen by guests. Acerbic, exacting, whimsically inaccurate, poignant, strange, and hilarious, the world of Mrs. Mortimer is one you'll want to visit, although ultimately you may not want to live there. A perfect gift for both those who travel and those happily content never to do so.

Sniffery at its Victorian finest

Published by Thriftbooks.com User , 17 years ago
It's hard to know how to begin a review about a book that at once seems so outrageously comical but at its core is so earnestly serious. In that we have, "The Clumsiest People in Europe", a compilation of writings by the erstwhile Englishwoman, Favell Lee Mortimer. This book is a dandy! Introduced and edited by Todd Pruzan, (who seems to have many of the same reactions that I did in reading Mrs. Mortimer) "The Clumsiest People in Europe" is a title that represents the tip of the iceberg to Mrs. Mortimer's harsh assessments of the peoples of the civilized, and in proper Victorian vogue, the UNcivilized peoples of the world. As Pruzan remarks, Mrs. Mortimer ventured out of England only twice in her life, so her reviews of the world are made even the more, well, let's say, curious. Nary a country escapes her scrutinies and admonishments. In that regard, Mrs. Mortimer is an equal opportunity employer. Spaniards are "cruel, sullen and revengeful". The country is full of robbers and wolves. After being barely benignly cruel, Mrs. Mortimer says of the Swedes, "you are ready to think the Swedes are a wise and good people. Not so. There is no country in Europe where so many people are put in prison." And so it goes. As she goes farther east and south, Mrs. Mortimer opens up with more vengeance. Suffice it to say she despises drink, Catholics, Jews, Muslims, blacks, Asians, the poor, idleness, tobacco and gambling. Mrs. Mortimer was born just the wrong side of prozac. Beyond the humor applied to today, one has to take a different look at Mrs. Mortimer's offerings. What was her motive in putting together these accounts? I have a sense that there was a serious purpose of educating those she felt needed to be educated. Her readers must have been mostly British, of course, and as much as she disdains most things, she has pretty harsh words for England (though she manages to make sure that England is THE superior country to all, throughout her chapters). The most intriguing aspects of Mrs. Mortimer's writings are her comments about slavery. Though slavery had been abolished only twenty years before she took up the quill, there is no doubt that she wanted to instruct her readers that slavery was a horrible institution. Although the United States comes across pretty well in her estimation, she spends a good amount of time sniffing about how America still practices it. She also declares that in Canada, (or "British America", then) "there are no slaves. There never can be any in countries that belong to Britain". My final thoughts are of a woman who, ensconced in a country nearing the height of its power, wished not only to tell people about the dangers of every evil, but in a subtler way, how they should live their lives. It's a remarkable equivalent to those in the United States today, who are updated versions of Mrs. Mortimer. The short historical introductions by Todd Pruzan are effective and welcome. I urge you to buy a copy of "The Clumsiest People in E

I laughed, I cried, it was better than...

Published by Thriftbooks.com User , 17 years ago
Mrs. Mortimer is hilarious. Until you realize (as I did, when reading the passage on my ancestors "the hindoostanees") that there's a teeny tiny grain of truth behind many of her caricatured profiles. Excellent introduction that sets up proper historical context and gives Mrs. Mortimer the "Behind the Music" treatment.

A terrific book for our time

Published by Thriftbooks.com User , 17 years ago
At a time when America is at war and issues related to globalization and xenophobia are inexorably linked, this timely book reminds that the more things change, the more they stay the same. While the book focuses on a collection of long-forgotten books written over a hundred years ago for British for children, it is 21st Century adults and students who can get the most from this volume. In a country where less than 20% of citizens have a passport, the U.S. is filled, particularly on the right, with many writers no different than Ms. Mortimer. What does that say about her? What does that say about us? This book inspired me to think about these questions. And the mark of a good book today is one that makes you think. I'd encourage college professors and high school teachers to use this book in their classes since it touches upon and informs so many issues facing the country. A terrific read. Hopefully, Mr Pruzan will find more of Ms. Mortimer's books for another volume!
Trustpilot
Copyright © 2022 Thriftbooks.com Terms of Use | Privacy Policy | Do Not Sell My Personal Information | Cookie Preferences | Accessibility Statement
ThriftBooks® and the ThriftBooks® logo are registered trademarks of Thrift Books Global, LLC