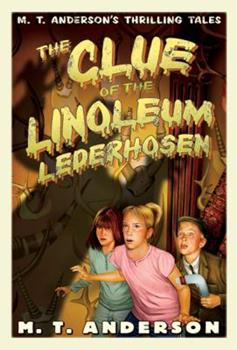 (Book #2 in the Pals in Peril Series)

In need of a vacation after their last laser-beam-filled adventure, Lily, Jasper, and Katie have flown off for a restful stay at a distant mountain lodge, which just so happens to be hosting a gathering for characters from other middle-grade series novels.

Published by Thriftbooks.com User , 11 years ago
I really wanted to dislike this book, too. As a big fan of the old juvenile series books Mr. Anderson is making fun of here, I wasn't looking forward to seeing them trashed, and it was pretty obvious from the description that trashing them was exactly what he was planning to do. In addition IMHO Mr. Anderson is only about half as funny as he thinks he is. What he does with Eddie Wax and Stumpy (I don't dare describe it!) is both poignant and hilarious. Portraying the Manley Boys as cruel but incredibly stupid bullies is just annoying. I've never read a book in which nasal allergies played so prominent a role in the plot. I PRAY that I never read another! And what in the world is a satire of The Sound of Music doing in here? But the fact is that I enjoyed the first book Whales on Stilts in spite of all my misgivings; in fact these are the first two books to have me laughing out loud while reading them in years. Clearly Mr. Anderson is growing on me, kind of like a hideous wart that cannot be killed, and I am forced to admit that he really stuck the landing: the ending was incredibly stupid, totally insane,... and just about perfect! I contemplate the third book in the series Jasper Dash and the Flame-Pits of Delaware with a sense of impending doom... and barely contained anticipation!

Published by Thriftbooks.com User , 13 years ago
This book was amazing! M.T Andersen pokes fun at The Hardy Boys, Nancy Drew, and other clasic childrens books. I laughed out loud many times through out this hilariuos book. I'm uterly shoked at how little regegnision the book has gotten... Honnestly this is better than Harry Potter! You should buy this book as quickly as possible!!!

Published by Thriftbooks.com User , 13 years ago
This book was amazing! M.T Andersen manages to poke fun at Nancy Drew, The Hardy Boys, and other childrens books. Each chapter ends in a cliff hanger so I read the whole book in a day. If you read this book be prepared to laugh out loud! I am uterly shoked at how little recognision this book got... Honestly it's better than Harry Potter. You should BUY THIS BOOK!!!

Published by Thriftbooks.com User , 14 years ago
Humorous parody that will hit home for anyone who grew up on the various "teen wonder pulp" series of the '40s, '50s or '60s (Nancy Drew, Hardy Boys, etc.) I'll have to let someone else speak to whether it works for today's teens. You can enjoy this without having first read its prequel, "Whales on Stilts." But I intend to pick up a copy, now that I've been introduced to Anderson's cast of characters!

An exciting page-turner for children

Published by Thriftbooks.com User , 15 years ago
Katie Mulligan is sick of life in Horror Hollow: the zombies, the vampires, the horrific practical jokes her mom and dad play --- it's all getting a little bit old. So when Katie's friend Jasper Dash, Boy Technonaut, receives a coupon for a free dinner at the Moose Tongue Lodge and Resort, Katie jumps at the opportunity for a few days away from adventure. When Jasper, Katie, and their friend Lily arrive at Moose Tongue, though, they are surprised to find that most of the guests, like Katie and Jasper themselves, are the stars of adventure novel series past and present. There are the Cutesy Dell twins (dead ringers for the Sweet Valley High girls), the clueless but oh-so-macho Manley Boys, and Eddie Wax (whose best friend is a horse named Stumpy). All the guests are thrown into turmoil, though, when the Hooper Quints, stars of a series of 1950s adventure novels, are kidnapped and held for ransom in a remote mountain cave. Jasper and Lily join a search party, but Katie, determined to avoid adventure, lounges around the pool with her new friends, the Cutesy Dell twins. Like WHALES ON STILTS!, the first book in M. T. Anderson's Thrilling Tales series, THE CLUE OF THE LINOLEUM LEDERHOSEN delights in over-the-top language and outrageous situations: "Freedom, alas, was far away. As Jasper listened in consternation to the screams of distress, he felt a creeping little feeling. It was inside his nose. His hay fever. It was getting worse." The plot is convoluted and absurd (just as a good old-time mystery story should be), and the novel makes dozens of references to other books and movies (for example, the Hooper Quints have a nanny who's a musical nun. When the outfits she sews out of curtains wear out, she makes them a new set of lederhosen out of the kitchen linoleum). With its glimpses into the narrator's back story and its tongue-in-cheek tone, Anderson's Thrilling Tales series is fast becoming the heir apparent to Lemony Snicket's A Series of Unfortunate Events. Stay tuned --- in the next installment, Jasper Dash heads for the wilds...of Delaware. --- Reviewed by Norah Piehl
Copyright © 2020 Thriftbooks.com Terms of Use | Privacy Policy | Do Not Sell My Personal Information | Accessibility Statement
ThriftBooks® and the ThriftBooks® logo are registered trademarks of Thrift Books Global, LLC