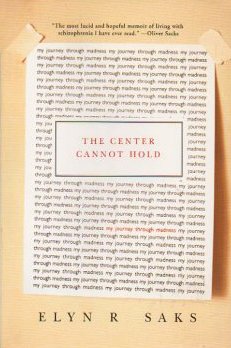 This description may be from another edition of this product. A much-praised memoir of living and surviving mental illness as well as "a stereotype-shattering look at a tenacious woman whose brain is her best friend and her worst enemy" ( Time ). Elyn R. Saks is...

Published by Thriftbooks.com User , 14 years ago
In "The Second Coming," Yeats writes: "Things fall apart, the centre cannot hold; mere anarchy is loosed upon the world." From this evocative poem comes the title of this searing "journey through madness," by the brilliant and courageous Elyn Saks. The author had an idyllic childhood in a loving and prosperous Miami home. However, when she was eight, she began to experience intense compulsions, night terrors, and most frightening of all, a feeling that her mind "was like a sand castle with all the sand sliding away." "Sights, sounds, thoughts, and feelings [didn't] go together." When she was twelve, she stopped eating properly and lost an alarming amount of weight. Elyn feared that something was terribly wrong with her, and she did her utmost to hide her condition from her friends and family. When she was a teenager, Saks experimented briefly with drugs, and this brought on more unpleasant symptoms. Things deteriorated further when she entered Vanderbilt University, where "schizophrenia [rolled] in like a slow fog," and she began to neglect her personal hygiene, forgetting to bathe and change her clothes. As a college freshman, she miraculously earned top grades while she struggled to keep her hallucinations at bay. Her "illness was beginning to poke through the shell" that helped her separate fantasy from reality. As long as the shell was intact, she could fool the world. When the shell broke down, so did she. In "The Center Cannot Hold," Saks describes a see-saw existence in which she excelled at her studies while trying to keep her mental illness from disabling her. Over the years, she saw various therapists (some of whom were insensitive and even cruel, others warm and protective), was institutionalized and physically restrained repeatedly, and reluctantly tried different psychotropic medications, some of which had debilitating side effects. If her life were a bar graph, it would look like a series of peaks followed by precipitous drops. Any stress or sudden change would send her into a severe tailspin, and for a long time, she believed that her delusional behavior resulted from her weakness and worthlessness. Saks is an eloquent writer who allows the reader to share her most personal and painful secrets; how difficult it must have been to reveal so much of herself after years of presenting a façade of normalcy to the world. This is an engrossing and poignant account of psychotic breaks, hospitalizations, and regressions, as well as of social, academic, and professional achievements. A less determined individual might have avoided challenging herself, but Saks was a serious scholar who studied philosophy, psychology, and law in such prestigious schools as Oxford and Yale. She also formed and maintained close friendships and sought a man who could love and accept her. Slowly, she climbed her rock-strewn path, suffering many distressing setbacks, but ultimately prevailing. The author insists that the mentally ill are not inh

Published by Thriftbooks.com User , 14 years ago
The Center Cannot Hold is probably one of the most amazing books every written. Why? Because it was written by Elyn Saks who is schizophrenic. To say that this highly educated, highly spirited woman has jumped hurdles to get where she is today, is to say nothing at all. For, her battles have been frequent, frightening and huge. I've worked with schizophrenics. They are, for the most part, the heart breakers of the world of mental illness. Often highly intelligent, young, their roads to success are set out in front of them - until the first symptoms begin. Then,thrust upon them for no reason other than a bad mix of brain chemicals, comes the frightening world of delusions and hallucinations. Medications work, then they don't, then when they do, the side effects are disabling. They spend so much time in hospitals simply because no one has come up with the proper medication. I never believed 'talk' therapy worked much, but obviously I was wrong. It certainly helped Elyn. I cannot believe how hard Elyn Saks worked to get where she is today. She is, quite simply, a marvel. I thoroughly enjoyed this book. I think it gives hope to those who are burdened by schizophrenia along with those sad families who are forced to witness their loved ones so ill. Hurray Elyn! Keep up the good work and thanks for fighting the good fight.

Cannot Put It Down

Published by Thriftbooks.com User , 14 years ago
This book is quite possibly the most clear-cut account of any mental illness, from the inside out. In psychology classes, no one can ever completely explain what schizophrenia is like, other than 'chaos in ones mind'. Saks completely diminishes the stereotypical crazy woman who is hearing voices and tearing out her hair. Not only does it give a sense of understanding of the illness, but also a real person, not just the homeless man on the street that we can forget about as soon as we drive by. This is a book that will stay with you and make you think twice before making any snap judgements of anyone, but especially the mentally ill. It is an easy, compelling read, to everyone, not just those with ties to the mental health community.

Other Than That, It Was An Uneventful Flight

Published by Thriftbooks.com User , 14 years ago
What's the "that" referenced above? The answer is provided in the previous sentences, "Over and over, I replayed the previous five years, trying frantically every single moment to keep the demons in my head from invading the plane and savaging the other passengers. From time to time, I considered asking the flight attendant whether she would mind if I jumped out the emergency door". This is a book about living with schizophrenia, and it is a great book, remarkable in many respects. Elyn Saks, endowed professor at USC's Gould School of Law, has written a gripping memoir of a life spent grappling with and eventually coming to terms with this disease. Here's her description of what she was up against, "Schizophrenia rolls in like a slow fog, becoming imperceptively thicker as time goes on. At first, the day is bright enough, the sky is clear, the sunlight warms your shoulders. But soon, you notice a haze beginning to gather around you, and the air feels not quite so warm. After a while, the sun is a dim light bulb behind a heavy cloth. The horizon has vanished into a grey mist, and you feel a thick dampness in your lungs as you stand, cold and wet, in the afternoon dark." Or said another way, "Consciousness gradually loses its coherence. One's center gives way. The center cannot hold. The "me" becomes a haze, and the solid center from which one experiences reality breaks up like a bad radio signal. There is no longer a sturdy vantage point from which to look out, take things in, assess what's happening. No core holds things together, providing the lens through which to see the world, to make judgments and comprehend risk". The juxtaposition of the uncanny on the mundane is stark and arresting. Saks writes, "Completely delusional, I still understood essential aspects of how the world worked. For example I was getting my schoolwork done, and I vaguely understood the rule that in a social setting, even with the people I most trusted, I could not ramble on about my psychotic thoughts. To talk about killing children, or burning whole worlds, or being able to destroy cities with my mind was not part of polite conversation". In the end this tenacious woman overcomes and is able to lead a full and successful life. However, she remains aware of a razor's edge that just won't go away, "My brain was the instrument of my success and my pride, but it also carried all the tools for my destruction". Highly recommended.

A memoir with appeal to patients, family, the psychiatry community, and the public as a whole

Published by Thriftbooks.com User , 14 years ago
Elyn R. Saks is an accomplished USC professor of law and psychology. She is working on her PhD in psychiatry, has dual appointments in academia, graduated with honors from Yale Law School, and was a Marshall scholar at Oxford. The publication of her memoir of a life with schizophrenia and acute psychosis marks the first time that her colleagues in the professional world will know of her diagnosis. For decades, Saks lived as a mental patient (the Woman of the Charts), as a shy woman with a small circle of close friends, and as a high-achieving academic who protected her psychological privacy at all costs. Upon learning that she was writing a memoir, friends wondered if Elyn would be reduced to "that schizophrenic with a job" when her story hit the bookshelves. Saks will never be "that schizophrenic with a job," and she has made a fantastic contribution for the psychiatry community, for patients suffering from social stigma, for anyone who interacts with those who have a diagnosed psychological disorder, and for fans of memoirs. Saks writes candidly about the workings of her mind, which made her such a success in philosophy, law, and psychology, but which also crippled her with delusions and hallucinations. She had a formative experience at a 1970's drug rehab camp (after a minor indiscretion with marijuana) which taught her that drugs were bad and any obstacle could be overcome with sheer force of will. For a schizophrenic, of course, medicine is an absolute necessity, and the disorder can not be overcome with will. Nevertheless, Saks spent decades trying to do just that, fighting her doctor's prescriptions at every turn, secretly reducing her dosages, until finally settling into her career in California with a low dosage of modern medicine and on-going talk therapy. She has stated that the more she accepted her illness, the less her illness defined her, because she was no longer fighting the rip currents of schizophrenia, and instead moving through them. Saks writes, "While medication had kept me alive, it had been psychoanalysis that helped me find a life worth living." Her illness became full-blown at Oxford, during which time she had to take time off from school (fortunately, she was performing independent study) to go through psychoanalysis. Saks makes profound observations about the differences between mental treatment in the U.K. and the U.S.--restraints are almost never used in the U.K., and certainly not as a punishment for misbehavior, as they are frequently used in the U.S. Also, doctors at Oxford made recommendations, not orders, on patient treatment, and the right of the patient to refuse was a sacred cornerstone. In her legal studies back stateside, Saks focused on the right on patients to refuse medication, as well as the effectiveness and humaneness of using restraints on mental patients. While working as a legal scholar, Saks went through her own personal struggles to find solid psychoanalysis and create a support
Copyright © 2020 Thriftbooks.com Terms of Use | Privacy Policy | Do Not Sell My Personal Information | Accessibility Statement
ThriftBooks® and the ThriftBooks® logo are registered trademarks of Thrift Books Global, LLC