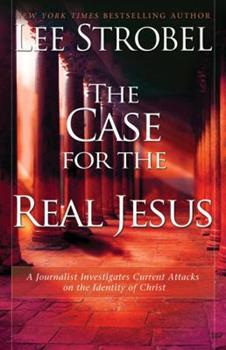 The Case for the Real Jesus: A Journalist Investigates Current Attacks on the Identity of Christ

Has modern scholarship debunked the traditional Christ? Has the church suppressed the truth about Jesus to advance its own agenda? What if the real Jesus is far different from the atoning Savior worshipped through the centuries? In The Case for the Real Jesus, former award-winning legal editor Lee Strobel explores such hot-button questions as: Did the church suppress ancient non-biblical documents that paint a more accurate picture of Jesus than the...

Published by Thriftbooks.com User , 15 years ago
Lee Strobel has a great job! He gets to travel around the world and interview scholars on the subject he is investigating. In this case, he's looking for the evidence for the real Jesus. I'm not particular interested in what kind of cookies his host's wife serves, nor am I interested in how the sun was shining into a room, which Strobel seems to like to mention. When he gets down to interviews he asks good questions and records the answers clearly. Some criticize Strobel for not interviewing the guys in the "other team." That's a fair criticism. However, Strobel does quote their works which removes the temptation to edit their statements. Some could accuse him of doctoring the other guys' quotes, but that is an easy one to solve. Go read the other team's books. Stobel gives both sides, the Bart Ehrman's and Elaine Pagel's fair representation when he quotes their books. However, he refutes their propositions with the answers from serious scholars of the New Testament like Craig Evans and Daniel B. Wallace. The essence of the book/audio deals with six questions that must be answered to determine who the "Real Jesus" is. He does this clearly and drives the point home that the real Jesus is the Jesus of orthodox conservative Christianity as attested to by the eyewitnesses. This is a good read and a good book to listen to.

Published by Thriftbooks.com User , 15 years ago
Strobel does not present himself as an intellectual heavy-hitter. He presents himself as a former atheist, who after some research discovered faith in Christ. He approaches his task with the perspective of a reporter and former legal editor of the Chicago Tribune, which he was. He does not represent himself as an authority. He simply has six challenges that he poses to scholars respected by both the defenders and skeptics of Christ. His six challenges are: 1. Scholars are uncovering a radically different Jesus in ancient documents just as credible as the four gospels. 2. The Bible's portrait of Jesus can't be trusted. 3. New explanations have refuted Jesus' resurrection. 4. Christianity's beliefs about Jesus were copied from pagan religions. 5. Jesus was an imposter who failed to fulfill the Messianic prophecies. 6. People should be free to pick and choose what to believe about Jesus. These are tough questions. Strobel does not provide the answers. He merely takes the question to the expert. These experts are not third rate scholars. Prior to each interview, Strobel presents each scholar's credentials. If you've been reading books in this sort of genre before, you will recognize the names. Even if you don't and are a layman, their credentials will impress you. The problem for me with the field of Bible study is that I am not a language expert. Unless I want to learn Coptic, Aramaic, ancient Greek, and Hebrew, I am never going to study the original texts. I therefore have to rely upon the accuracy of others. Trust is key. I have read numerous books by Bart Ehrman and Elaine Pagels. These authors, despite their credentials, seem to cultivate attention by putting forward controversial, edgy ideas designed to raise eyebrows. Trust just isn't established for me by those sorts of academics. But I do trust the work done by Strobel in this book. This book is worth reading. Get it. It may not change how you see things, but it is well-researched and definitely thought provoking.

Published by Thriftbooks.com User , 15 years ago
In this latest book, Lee Strobel discusses six challenges to the traditional Christian portrayal of Jesus. In his signature journalistic style, he walks his reader step-by-step through each challenge as he describes his careful investigation and records his interviews with top-notch scholars from around the world. As with his other books in the "Case for" series, each scholar interviewed deftly dismantles each challenge by expressing his viewpoints in clear, precise manners and using illustrations that make it easy for the layman to understand. Lee further strengthens the arguments presented by each scholar by including additional quotes and follow up resources. In addition, his commentary sometimes elaborates and clarifies various points along the way, and serves to keep the text from becoming too heavy and overbearing. As an avid reader of apologetics literature, I highly recommend this timely book. If you have not encountered some of these challenges to the Christian faith, then you soon will. In fact, just 4 days prior to writing this review I was visiting a friend who had just picked up a copy of Bart Ehrman's book Misquoting Jesus. Thanks to Lee's book, I was prepared to discuss the challenges raised by Ehrman with my friend. As Lee mentions in the book, the internet has given rise to numerous websites that give half-truths and present pseudo-scholarly arguments against the Christian faith that sound convincing. Believers need to be prepared - and The Case for the Real Jesus is a powerful tool to help strengthen one's faith and protect against false and misleading "scholarship." Keith A. Robinson Author of Logic's End: A Novel about the Origin of Life in the Universe

Add this one to your collection

Published by Thriftbooks.com User , 15 years ago
Q: If you've already read _The Case for Christ_, should you bother with this one? Or is it just an "update" of the previous work that re-hashes old content? A: You definitely want to read this one. _The Case for the Real Jesus_ is not an "update," but an important Volume II of _The Case for Christ_--important because it addresses skeptical arguments that have gained new popularity in the last 10 years due to recent novels, movies and scholarship coming out of the "new school" of early church history. Though these arguments are not the strongest that skeptics have to offer, they do seem to be the ones that currently enjoy the most buzz. Q: Has Strobel responsibly presented these skeptical objections or has he watered them down to gain an advantage? A: As a researcher of the scholarship in new testament and early church history, and one who has read extensively the work of Ehrman, others of the "new school," and skads of internet skeptics, I can say that Strobel makes the opposing arguments as strongly here as I've ever seen them made elsewhere. No serious scholar would find fault with his representations of the arguments. In some cases, his cross examinations of the scholars exceeds what reasonable skeptic scholars actually argue. Q: Is this book just for the novice of apologetics? A: Not at all, though of course all these _Case_ books are ideal reading for the novice. My personal library is loaded with works that dive into greater detail, covering much more about a lot less than the _Case_ books attempt. This is why I like the Strobel books: They are one-stop-shopping for all the major arguments that call for answers and as such are a handy, quick reference. _The Case for the Real Jesus_ is a very helpful addition to the series. As many have discovered, the _Case_ books are ideal for sharing with friends who are interested in questions for Christianity but who may not be believers. _Real Jesus_ and its content will be the first book I share with the person who asks me what I think about _The DaVinci Code_. All of which is to say: _The Case for the Real Jesus_ is engaging, accessible and relevant for the novice while also being serious, contemporary and convenient for those already invested in the field. I'm glad to have it on my shelf, and I won't hesitate to share it with others.

It's the evidence not the agenda!

Published by Thriftbooks.com User , 15 years ago
In the interest of full disclosure, I am a Christian apologist and writer (I Don't Have Enough Faith to Be an Atheist)who is a friend of Lee Strobel. Yes, I have an agenda just like every author who claims to write non-fiction. Lee Strobel has an agenda, and so do the atheist critics who dismiss his work. But that doesn't mean that what Lee or a critic writes is false or biased. People can present evidence objectively even if they personally are not neutral (I've noticed that neutral people rarely have the interest or expertise to write books!). Unfortunately, many of Lee's critics claim that Lee's work cannot be trusted simply because he has some kind of Christian agenda. This is a fallacy that, if true, would swing a sword cutting both ways-- if you can't trust Lee because he has a Christian agenda, then you can't trust his critics because they have an atheist agenda. All authors have agendas, and all authors believe what they write! The issue is not the agenda, but the evidence! The survivors of the Holocaust certainly had an agenda when they wrote about its horrors. Does that necessarily mean that we cannot trust them? Of course not. In fact, their experiences may have caused them to be all the more accurate and meticulous so as not to risk the dismissal of the message they cared so passionately about. If you know Lee Strobel, he takes the accurate and meticulous route when writing a book. As in his previous "Case" books, Lee covers complicated topics honestly, and in a very readable and comprehensive way. When interviewing Christian scholars, Lee plays the part of a skeptic: he asks the kinds of questions and offers the kind of objections that real skeptics write about in their books-- people such as Bart Ehrman, Richard Carrier, and several "Jesus Seminar" proponents. Critics complain that Lee should really interview those people, but why? Their thoughts are already in their books. Lee's job is to see if their thoughts are credible by interviewing Christian scholars with an opposing view. As usual, Lee plays devil's advocate brilliantly. It's as if the skeptics are asking the questions themselves. So who cares who's asking the skeptic's questions? They are asked and answered, and you, dear reader, are left to judge whether or not those answers make sense. I think they make great sense. One of the best things about "The Case for the Real Jesus" is that Lee addresses the hottest alternative Jesus theories of the day. You'll read about the so-called Jesus tomb, the charge that the manuscripts can't be trusted, and the claim that Christianity was copied from pagan resurrection myths (among other topics). This is the one book that will give you the bottom line on all of those alternative theories-- a bottom line that once again reveals that the most reasonable conclusion is that Jesus of Nazareth really did rise from the dead for your sins and mine. So let me reveal my agenda-- I can't recommend this book more highl
Trustpilot
Copyright © 2022 Thriftbooks.com Terms of Use | Privacy Policy | Do Not Sell My Personal Information | Cookie Preferences | Accessibility Statement
ThriftBooks® and the ThriftBooks® logo are registered trademarks of Thrift Books Global, LLC