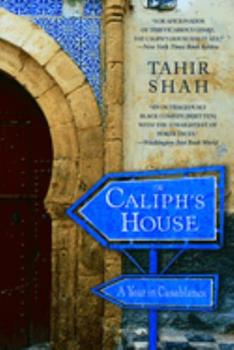 The Caliph's House: A Year in Casablanca

In the tradition of A Year in Provence and Under the Tuscan Sun , acclaimed English travel writer Tahir Shah shares a highly entertaining account of making an exotic dream come true. By turns hilarious and harrowing, here is the story of his family's move from the gray skies of London to the sun-drenched city of Casablanca, where Islamic tradition and African folklore converge-and nothing is as easy as it seems.... Inspired by the Moroccan vacations...

Published by Thriftbooks.com User , 15 years ago
I couldn't put this book down. My husband is Moroccan and I've spent a lot of time with in his family home there. I could relate to a lot of Shah's descriptions, based on my own and friends' experiences. Shah's writing is wonderful, funny and not at all condescending like other "live abroad" books.

Published by Thriftbooks.com User , 15 years ago
This is a very funny and readable account of Tahir Shah's ordeals trying to remodel a decrepit palace in Casablanca. In some ways, Shah's account reads like a man's Moroccan version of UNDER THE TUSCAN SUN. It's less romantic and food-oriented, but references the similar nightmares and pleasures involved with restoring an ancient dwelling. This book is VERY funny. Tahir Shah is an Englshman of Afghani descent, so Morocco really is a culture shock for him. The odd and "backwards" aspects of trying to get things done in Morocco are amusing and educational. For instance, Shah ends up having to have the house exorcised for jinni (genies) and even having to take a second wife (it's not what you might think) to finish the project. Looking at the other reader reviews below, it's clear that I'm not the only one with a high opinion of THE CALIPH'S HOUSE. Trust us!

Published by Thriftbooks.com User , 15 years ago
I found out about Tahir Shah's "The Caliph's House" in an issue of the International Herald Tribune. Although I've lived in Spain, speak French, and have many friends from Northern Africa (Algeria, Tunisia, Morocco), I've not yet had the pleasure of visiting Morocco, where Tahir Shah moved his wife Rachana and children to escape the stale, boring life of London. Raised by an Afghan father on tribal legends and childhood treks through the Atlas Mountains, Shah is drawn by the sense of exotic beauty and deep-seated cultural values of Morocco, enough so that he purchases a run-down estate in a shantytown. The Caliph's House is filled with traces by bygone beauty: secret gardens in inner courtyards, mysterious locked rooms, and unlimited potential for restoration: the beautiful bejmat mosaics and fountains that Islamic art has been famous for for centuries, carved cedar shelves, grand doors. Shah quickly realizes that despite its French appearance and legacy, Casablanca is purely North African, governed by age-old ritual and superstition: Jinns that rule his new home and cause accidents and deaths, workmen that never finish a single project, the constant headache of bargaining for every item needed for restoration, living next to seething slums where Arab Gulf Al-Qaeda members are recruiting in the local mosque. The cast of characters is immensely entertaining, serving to outline the contrasts in modern Morocco: a French countess who was a friend of Shah's grandfather, a pessimistic French diplomat, an elderly stamp collector who trades stamps for stories, three guardians who come with the house but end up causing nothing but headaches, a local gangster and his trophy wife, and the servants that Shah hires to attempt to add rule and order back to his life, but who quickly teach him that to accomplish anything, he needs to think like a true Moroccan. Unlike the myriad of home restoration shows on the BBC and HGTV, Shah's project is plagued by disaster from the beginning: a phony architect and his bungling workers knock down walls with glee, Shah's black market sand provider is jailed on prostitution charges, his mail-order furniture from India (ordered after several glasses of wine)and personal library of 10,000 books is held hostage by Moroccan customs, and the supposed haunting by Jinns is enough to nearly drive Shah and family from Dar Khalifa, but cooler heads and a new cultural awakening prevails. Shah learns to admire the wealth of cultural traditions that guide Morocco, reconnects with his famous grandfather, who spent the last years of his life in Casablanca, and finds the journey ultimately rewarding. Full of sharp humour, eagle-eyed observations gleaned from a lifetime of travels, and an eye for beauty, "The Caliph's House" is a delightful, exotic journey into the cultural heart of Morocco, full of whispering fountains, lush secret gardens, the glitter of glazed tile mosaics, the muezzin's chant, and the call of the unknown.

From Apprentice to Master

Published by Thriftbooks.com User , 15 years ago
In "The Caliph's House", Tahir Shah shows us that he has graduated from a Sorcerer's Apprentice to a master alchemist. Wanting to transform his life for his young family, Shah leaves his crapped apartment in the cold and wet London for a large but forlorn palace in the warm and sunny Casablanca. Once there he begins the arduous task of transforming lead into gold. Anyone familiar with Shah's other books knows that he seeks challenges where success is far from guaranteed. This formula brings interesting and down right hilarious adventures which begin the very first night. From beginning to end Shah weaves a magical spell. A good book nourishes the soul the way a good meal nourishes the body. "The Caliph's House" is a feast -- Bon Appetite.
Copyright © 2020 Thriftbooks.com Terms of Use | Privacy Policy | Do Not Sell My Personal Information | Accessibility Statement
ThriftBooks® and the ThriftBooks® logo are registered trademarks of Thrift Books Global, LLC