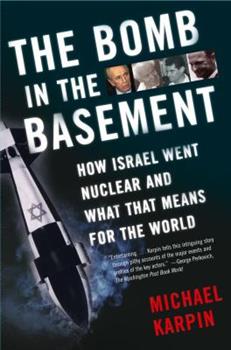 The Bomb in the Basement: How Israel Went Nuclear and What That Means for the World

As Iran continues to develop its nuclear program and explicitly denounces Israel, Michael Karpin's The Bomb in the Basement provides important context for the ongoing tensions in the Middle East. After Israel won its war of independence in 1948, founding prime minister David Ben-Gurion realized that his country faced the possibility of having to fight Arab nations again in the future. He embraced the idea of developing a nuclear capability and put...

Published by Thriftbooks.com User , 13 years ago
This is a terrific book. It's a bit gossipy, which makes it extra entertaining. Example: Golda Meir's breakdown during the Y-K war; the general contempt for Shimon Peres; how both Truman and Kennedy acknowledged that they owed their election to the Lobby; how Rabin got his Phantoms out of LBJ; Teller's assistance with the project. There is a great deal of information about the French connection, pre-de-Gaulle. And it is of course not just about the development of the device, but about the creation and growth of Israel in general. A couple of details reviewers might find of interest, recalling that Karpin can't say a number of things, and other things he simply doesn't know about (his unknown unknowns). 1) Nothing new here but the bland denials about the 1979 test; yet most who have reviewed the Vela flash and corroborating evidence seem nearly 100% convinced that it was a genuine test. (Karpin talks about "photographs" from Vela, so he hasn't investigated this very deeply.) 2) Nothing new about USS Liberty, although most likely Karpin does know what really occurred. 3) A bit of interesting detail about the Egyptian (prob. Russian) overflights of Dimona in May 1967, during extreme tension. This is good, because a couple of Israeli jokesters have weaved a conspiracy theory about it recently (Foxbats over Dimona). Karpin says they were MiG-21s dashing in from Jordan at 55,000 feet and the IAF Mirage IIICs could not catch them. A very good read, but obviously not the whole story, and probably not all accurate. Ben-Gurion made a wise choice back at the founding; events continue to prove him right.

An extremely interesting story which is very well told

Published by Thriftbooks.com User , 13 years ago
The first that the author clarifies is that the book has been heavily cencored by the Israeli military, thus do not expect to find in it startling revelations about Israel's nuclear program. What you will find though is a very good account of the whole effort and its protagonists, from 1948 to the present (albeit the story somehow stops in the `80s). The reader will find also many similarities between the Israelis' efforts to conceal their project and the Iranians' efforts today and will come to the conclusion that when we have to do with a national effort to aquire the ultimate weapons of mass destruction we must it's rather naïve to expect those responsible to tell the truth or confess their aims. The chapters which deal with the US - Israeli relations and how they were strained by the race for the "bomb" are amonf the best. This is surely a very nice account on the subject of the Israeli "secret" nuclear arsenal and it is surely more readable than A. Cohen's book "Israel and the Bomb".

Published by Thriftbooks.com User , 14 years ago
"The Bomb in the Basement" is a superbly written history of Israel's nuclear program. It documents it from the earliest stages during the pre-state period all the way till the Yom Kippur War. There is also a small chapter on how Israel might deal with an Iranian bomb. Before reading this book, I was not aware at how involved Ben-Gurion was in Israel's quest for nuclear weapons. This book also details how US policy helped Israel get the bomb, and contains many fascinating insights into US-Israeli relations from Truman till Carter. I would suggest this book to anyone who is interested in Israeli history and defense.

Great Review of Modern Israel History and Even Handed

Published by Thriftbooks.com User , 14 years ago
I was fascinated by this book. It provides a great review for the history of Israel, from the perspective of developing nuclear capability, and pretty good political analysis. I learned a lot of things I had previously been unaware of including why Lyndon Johnson was so attached to Israel, and how Anwar Sadat planned the last war Egypt fought against Israel. The insights I gained into Egypt were by themselves worth the book. I finished the book with lots of admiration for Sadat. The book also discussed Egypt's intervention in Yeman, under Nassar, which I was previously not well informed about. I do not know Michael Karpin's background, but overall I really think the author was even-handed to all concerned and basically just tried to provide an accurate analysis.

Published by Thriftbooks.com User , 15 years ago
I just finished The Bomb in the Basement, and thought it was tremendous - feels completely new, evenly balanced, and (particularly for a person as ignorant as I am) enlightening. Who knew that France was so involved, that France benefited from Israel's own expertise, and that Israel's ambiguous messages evolved in such a delicate fashion. The story is also a clear lens through which to see Israel's emotional, social, and political development - not to mention the transition in Israel-U.S. relations from wariness to warmth. The subtext I found most interesting was the role that censorship played and plays. The phrase "according to foreign sources" ends up, rather than concealing, ironically being a signal for the most important revelations. Any sentence that carries that phrase or its equivalent is to be taken most seriously. Joe Cohen, NYC
Copyright © 2022 Thriftbooks.com Terms of Use | Privacy Policy | Do Not Sell My Personal Information | Accessibility Statement
ThriftBooks® and the ThriftBooks® logo are registered trademarks of Thrift Books Global, LLC