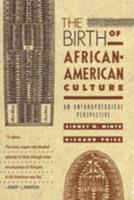 The Birth of African-American Culture: An Anthropological Perspective

This compelling look at the wellsprings of cultural vitality during one of the most dehumanizing experiences in history provides a fresh perspective on the African-American past.

Published by Thriftbooks.com User , 18 years ago
'The Birth of African-American Culture: An Anthropological Perspective' is an early 1970s reaction to the `swift' establishment of Afro-American and Black Studies programmes within the U.S. American Universities, in the aftermath of the Civil Rights Movement. Its authors-Sidney Mintz and Richard Price-feared that, with the `explosion' of general interest in Black History, ideological concerns might sidetrack the invaluable `scholarly quest' previously established by the likes of W.E.B. Du Bois and Zora Neale Hurston (in the U.S.A.) Jean Price-Mars (in Haiti) or Fernando Ortiz (in Cuba) to name a few. Therefore, 'The Birth of African-American Culture' cautiously offers strategies/approaches to study the Afro-American past that would do justice to the complexity of the subject. Its central thesis, supported both by documentary material and speculation, is straightforward: continuities between the so-called `Old' and `New' Worlds must be established on a comprehension of the `basic conditions' under which the migrations of `enslaved Africans' took place.Today, that the analysis of the development of Afro-American culture should focus on `process' is no longer an issue; the works of renowned scholars such as Henry Louis Gates, Jr. and Lawrence W. Levine are a testimony to it. In a sense, these academics vindicate Mintz and Price who, two decades earlier, have emphasised the need for more analytical subtlety, flexibility, and sound socio-historical research in Afro-American Studies. What is more, Mintz and Price are aware of the book's achievement, even though, in its 1992 re-edition, caution is still strong in the way they reassert their belief in a two decade-old thesis. For example, in the new preface, Mintz and Price repeat that the unavoidable fact in the study of Afro-America is `the humanity of the oppressed, and the inhumanity of the systems that oppressed them.' Both believe that such oppression `has by no means ended should be clear to everyone, as it is to us.'The text of 'The Birth of African-American Culture', including introduction and conclusion, is eighty-five pages long; yet amazingly it covers a broad range of complex issues focused on slave society, from the origins and beginnings of Afro-American societies and cultures to questions of kinship and sex roles therein. In their rigorously balanced, albeit too tentative at times, analysis of Afro-American Culture the authors rightfully argue that the transfer of culture intact from Africa to the Americas is more fiction than reality. Mintz and Price believe that `Retentions' and `Survivals' are more the exception than the rule in any group's transport of beliefs and values from one locale to another (Europeans included).The Birth of African-American Culture is thought provoking; it is still very useful in the scholarship on slavery, and issues of the origins and development of Afro-American culture. It is also a must-read for those Africans who refuse to be carelessly melted in the pot
Trustpilot
Copyright © 2022 Thriftbooks.com Terms of Use | Privacy Policy | Do Not Sell My Personal Information | Accessibility Statement
ThriftBooks® and the ThriftBooks® logo are registered trademarks of Thrift Books Global, LLC