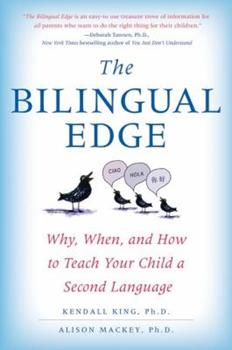 The Bilingual Edge: Why, When, and How to Teach Your Child a Second Language

by Alison Mackey and Kendall King

It's no secret that parents want their children to have the lifelong cultural and intellectual advantages that come from being bilingual. Parents spend millions of dollars every year on classes, computer programs, and toys, all of which promise to help children learn a second language. But many of their best efforts (and investments) end in disappointment. In The Bilingual Edge , professors and parents King and Mackey wade through the hype and provide...

Published by Thriftbooks.com User , 14 years ago
. . . when my first son was in the womb. We wanted to bring him (and later his two brothers) up bilingual, but didn't know how we could. We are a majority language family, albeit my wife's dialect of English differs from mine. All our children's living ancestors were monolingual English speakers. But had we had this book, we would at least have learned how to try to bring our sons up bilingual. I bought this book to give to our youngest son and his wife, and I hope to give his brothers copies of it when they get married, in the hope that our grandchildren will be given the bilingual edge. Our son and his wife are, it turns out, almost ideally equipped to raise their children bilingual, using one-parent-one-language, especially if they live near her parents, both native speakers of Mandarin, as she is. Altho written by two Ph.D.'s, this book is not a dry academic tome, but is written for us ordinary folks to read, understand, and use. It is full of practical suggestions and clear, understandable presentations of the results of scientific papers on bilingual education; not the details of the statistical techniques they used, but what the researchers learned and how we parents can use it to help our children. Anyone who has young children, or children on the way, should buy and read this book. ALSO, IT SHOULD BE IN EVERY HIGH SCHOOL LIBRARY! watziznaym@gmail.com

Teaching Your Child Another Language - Not as difficult as you think

Published by Thriftbooks.com User , 14 years ago
So you want your child to learn another language? But you aren't sure which language or when to start? The Bilingual Edge is a book you MUST read - if you want your child to learn more than one language. Think it can't be done? Perhaps you believe that children who learn their native language at home, then learn English as a second language may never become fully proficient in either language. Many people believe such myths, say authors King and Mackey. But they are just that - myths. Read on. The authors dispel myths that people have about language learning. Schools of thought have gone from one side to the other in recent decades. I remember when people seemed to believe that a child could learn language most easily when they were about five years of age. That was about 40 years ago. Fast forward a few decades to the prevailing wisdom which states that children who spoke more than one language never became as proficient in either language. Fast forward again to now. King and Mackey present evidence that debunks these earlier myths. Below are the 10 most common myths about learning a language, as King and Mackey have reported in their book, The Bilingual Edge: Why, When, and How to teach Your Child a Second Language. "Myths (Page 18) 1. "Only bilingual parents can raise bilingual children and bilingual parents always raise bilingual children. 1. I'm too late! You have to start very early for second language learning or you will miss the boat. 1. Only native speakers and teachers can teach children second languages. 1. Children who are raised in the same family will have the same language skills as one another. 1. It's important to correct error as soon as they appear in grammar and vocabulary (to prevent the formation of bad habits). 1. Exposing my child to two language means she will be a late talker. 1. Mixing languages is a sign of confusion and languages must stay separate (one parent-one-language parenting is the best way). 1. Television DVD and edutainment, like talking toys are great ways to pick up language. 1. Bilingual education programs are for non-English speakers. 1. Two languages are the most to which a very young child should be exposed." All of these myths are wrong, simply wrong, say the authors. Another section: The Real Deal on the Top Ten Myths About Second Language Learning - corrects these myths. (Page 33) " 1. "Any parent can raise a child who knows more than one language, even if that parent is monolingual (all children can learn a second language even if their parents don't know that language). 1. It is never too late and younger is not always better in every way. 1. Rich, dynamic, and meaningful interaction is critical and more important than having a perfect native-speaker model. 1. For lots of different reasons, children reared within the same home can end up with very different language skills from one another. 1. Constant

Published by Thriftbooks.com User , 15 years ago
This book answered all my questions about a second language for my daughters. This is a difficult topic to find literature on and this book does a great job summarizing everything a parent needs to know to make a good decision for their child regarding a second (or third) language. When you read this book you really do feel like you are sitting down and chatting with two friends who are linguistic experts (and moms). I highly recommend it! Dr. Jenn Berman Author of The A to Z Guide to Raising Happy, Confident Kids

This book encouraged me to continue to swim

Published by Thriftbooks.com User , 15 years ago
Having decided to raise bilingual children in spite of not being a native Spanish speaker, I spoke to my first child 99% of the time in Spanish. My younger daughter seemed to have a harder time understanding Spanish and I became lazier and started speaking more English at home. I'm very happy that I read this book when I did because it's given me many reasons to start speaking Spanish to my children almost all of the time. This book discussed many important points about raising bilingual children. First it debunks 10 common myths about raising bilingual children. Secondly, it lists 10 facts about raising bilingual children. It includes important statistics such as the percentage of 2nd generation and 3rd generation children from Spanish speaking ancestors who speak Spanish. Other information that I found helpful was the research that not all children in the family have the same amount of bilingualism and factors that contribute to this and how raising bilingual children is "swimming against the tide" and why it is so challenging. It also stressed that it's important for children to interact in the 2nd language about 20% of the time. Once the children reach school-age, this becomes very challenging since most of our schools are unfortunately not dual language schools. I placed my children in ESL classes so they would make friends who spoke Spanish, and I've been impressed with the academic excellence of their Spanish speaking friends. This book discussed research results of how bilingualism helps in other academic areas. This book reaffirmed my commitment to raising bilingual children. It's worth the effort! It was also encouraging to read that even non-native speakers can successfully raise bilingual children. In the area where the authors said that children did not seem to learn language from the TV, DVDs, electronic toys, etc., it seemed like their evidence focused on the words the children spoke vs. what they comprehended (which is also very important). My youngest daughter understands most of the Spanish she hears, but she struggles to speak it. These are two different skill sets that need to be tested independently. The native Spanish speaker that I work with to produce free podcasts that teach Spanish and English at Edufone.com tells stories of her children learning a lot of English just by watching T.V. I would like to see more research in this area. My experience with my children has been that watching programs in Spanish helps to reinforce their Spanish comprehension. I agree with the authors that it is not a substitute for interacting with a Spanish speaker. I highly recommend this book because it is full of research about raising bilingual children and about suggestions for doing so. [...]

Published by Thriftbooks.com User , 15 years ago
King and Mackey have done something quite near and dear to my heart, which is to make sound research findings available to parents and teachers and anyone who is interested. Additionally, its a fun read with humor and personal anecdotes from real parents. This book is fairly unique such that it was written by two women who are both professors and mothers. Not only do they do a great job of synthesizing cutting edge research on cognitive development, they write as experienced moms who know ropes of parenting as well. They take research data about how children learn second or third languages and turn them into concrete ideas that you can put into practice in the grocery store or at dinner. I also LOVE the fact that they take on the many myths around second language learning. There are so many 'truths' about bilingual children that are propagated but are just not accurate or have been disproven. And as a person who never misses the opportunity to debunk the myth that Baby Einstein is educational, I really like to hear people talking science instead of just what will sell. I think this book is a great tool for people in quite a few situations, from those who have second language they wish to teach their child, to those who only speak English but who are really interested in all the benefits there are to being bilingual. This is definitely a great choice for parenting book clubs or as a gift for a friend.
Trustpilot
Copyright © 2022 Thriftbooks.com Terms of Use | Privacy Policy | Do Not Sell or Share My Personal Information | Accessibility Statement
ThriftBooks® and the ThriftBooks® logo are registered trademarks of Thrift Books Global, LLC