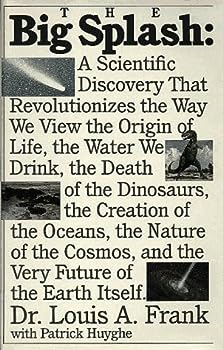 The Big Splash: A Scientific Discovery That Revolutionizes the Way We View the Origin of Life, the Water We Drink, the Death of the Dinosaurs, the C

by Patrick Huyghe and Louis A. Frank

This description may be from another edition of this product. The author claims to have found scientific evidence that every year, millions of small comets (made of ice and water) strike the Earth's atmosphere, and that these comets created Earth's lakes, rivers...

Published by Thriftbooks.com User , 17 years ago
Every so often you read a book that changes the way you look at everything because it shows that something we took for granted is wrong. This is one of those books. Frank is not a terrific writer. There are slow passages and sections that are overly detailed and filled with arcane information. However, he is a scientist that stumbled on the origin of water on Earth . . . small comets that are constantly hitting Earth's atmosphere. This is astounding and went against all of the accepted geologic theories of the origin of water on the planet.This book is also about the tunnel vision of scientists and the vicious in-fighting that goes on in academia when the status quo is challenged. There is a truism that scientists don't change their minds; they just die off and are replaced by scientists who believe the new theories.I read this book when it first came out and was mightily impressed. Just recently a newly lofted satellite has proven Frank correct and a Scientific American article detailed the proof and the fact that his nay-sayers are now either eating crow or are marginalized in their continued denial. Highly recommended, especially for those interested in Earth sciences.

Published by Thriftbooks.com User , 22 years ago
Dr Frank develops a hypothesis that is very plausible, well supported and a suprisingly engrossing read. By the time I finished, my beliefs in the objectivity of the scientific community had been severly shaken.He makes a rather complex subject easy to understand and enjoyable. If only I had been fortunate enough to have more teachers in college that could make a subject come alive.

Published by Thriftbooks.com User , 22 years ago
Frank explains in wonderful detail the problems that a scientist has when he makes an important discovery outside of his accepted expertise. He is not the first to suffer from this prejudice, nor will he be the last. But, it is important for us to be reminded that science too, often wears blinders and because of this, important discoveries are ignored and it takes decades before we are able to move forward in our knowledge of how things work.
Copyright © 2020 Thriftbooks.com Terms of Use | Privacy Policy | Do Not Sell My Personal Information | Accessibility Statement
ThriftBooks® and the ThriftBooks® logo are registered trademarks of Thrift Books Global, LLC