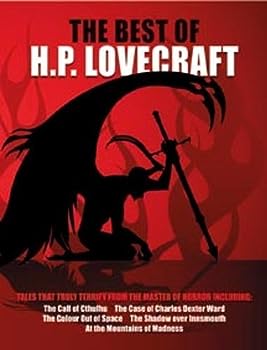 Best of H.P. Lovecraft: Tales that Truly Terrifiy from the Master of Horror

This description may be from another edition of this product. "H.P. Lovecraft has yet to be surpassed as the twentieth century's greatest practitioner of the classic horror tale."--Stephen King "The oldest and strongest emotion of mankind is fear, and the oldest...

Published by Thriftbooks.com User , 19 years ago
This is basically the essential Lovecraft collection, featuring 16 of his best pieces of fiction and a noteworthy introduction by Robert Bloch, a member of the Lovecraft circle.. Naturally, one can make an argument for other tales that should be included, but the contents as they are represent a compelling cross-section of the master's work over the course of his literary career. It must be noted that Lovecraft's three short novels, which are of course immensely important, are not among these shorter works, but their inclusion in these pages would result in a much longer book that could potentially turn away potential readers. This book more than any other serves as a beacon to new readers yet to discover horror's greatest writer. Every story herein deserves it own review, frankly. "The Rats in the Walls," "The Dreams in the Witch-House," and "In the Vault" (one of my favorites) offer traditional horror tales full of Lovecraftian atmosphere. "The Outsider," perhaps the least satisfying read, is an allegorical tale reflecting an isolated individual's view of society and of himself. "The Silver Key" is a solid representative of the dream-myth stories of the author's earlier years and serves as an introduction to Lovecraft's heroic character Randolph Carter. "The Colour Out of Space" is a singular, science fiction/horror tale counted by Lovecraft himself as one of his favorites. "The Picture in the House" is perhaps Lovecraft's most efficiently horrifying story ever, "The Music of Erich Zann" is an unforgettable tale touching on the great secrets of the unknown, and "The Shadow Over Innsmouth" sensationally evokes the horror and depths of influence by unseen agents on this earth. These stories effectively set the stage for the Cthulhu Mythos tales, of which the remaining stories form an integral part. "The Call of Cthulhu" and "The Dunwich Horror" herald the full manifestation of Lovecraft's cosmic horror and describe the ambivalent agency of incomprehensible outside forces on mankind. "The Haunter of the Dark" and "The Thing on the Doorstep" highlight even more mysterious access points of the unknown into man's consciousness. I must give special attention to my two favorite Lovecraft tales: "The Whisperer in Darkness" and "The Shadow Out of Time." Much of the action detailed in the first of these stories is related to the reader by way of letters exchanged between an isolated scholar in the hills of Vermont and the narrator, an expert in folk tales who is compelled to believe the ancient stories of alien influences he once preached against. We see no action first-hand until the latter pages, when the protagonist finally visits his correspondent in Vermont and is presented with facts and examples proving the reality of advanced alien life forms; the evolving conclusion of the tale is perhaps predictable to a degree but the final revelation remains quite effective nonethless. I consider "The Shadow Out of Time," written very near the

The definition of "Lovecraftian"

Published by Thriftbooks.com User , 20 years ago
There is a select group of authors whose names have become adjectives: "Dickensian," "Borgesian," "Kafkaesque," etc. Well, H.P. Lovecraft is one of this elite crew, If you want to know the definition of "Lovecraftian," check out "The Best of H.P. Lovecraft: Bloodcurdling Tales of Horror and the Macabre." This book brings together 16 masterful tales, together with an introduction by Robert Bloch.It is perhaps too limiting to simply define Lovecraft as a horror writer; his stories also demonstrate elements of fantasy, science fiction, satire, and "local color" fiction. You'll get all these "flavors" in this collection. And along the way you'll encounter strange monsters, weird cults, forbidden books of the blackest magic, snippets of an unknown language, and a disturbing warp in the fabric of space and time.Many of these stories, while standing alone as compelling pieces of fiction, also work together towards creating Lovecraft's own personal mythos. Thus, certain elements turn up in multiple stories: Miskatonic University, Cthulhu, and the feared Necronomicon.Lovecraft is a master of complex, collage-like texts that incorporate references to people, institutions and periodicals, both real and imaginary. His style has an unsettling way of warping the reader's grip on reality. In many stories there is a sense that Lovecraft is satirizing the world of academia (some of his narrators and other characters are college professors, or otherwise connected to academia). If you have not yet entered the weird, wondrous world of H.P. Lovecraft, check out this collection. Also recommended: Lovecraft's "At the Mountains of Madness and Other Tales of Terror."

Incredible collection of some of an incredible writer's work

Published by Thriftbooks.com User , 22 years ago
H.P. Lovecraft was the best horror writer of this century. And by saying this, I do not feel I am going out on a limb.Never before has an author impacted my thought as much as Lovecraft has. I constantly read his work and frequently talk about him to others. In fact, I even sport a few Lovecraft shirts around town. Obsessed? Yes, but for good cause.As Ramsey Cambell said, Lovecraft can do something many other "master" authors can't: Infuse the reader with mindnumbing terror. Maybe "mindnumbing" is a little bit of an overstatemnt, but terror isn't. Mixing a broad range of stories from tales of crazy scientists to genocide of ancient races, Lovecraft presents a very powerful and interesting philosophy (best summarized by earlier said Campbell): Man is luckilly ignorant of certain things, for if they knew them it would be death or insanity.And this book shows just that. From "Call of Cthulhu" to "The Rats in the Walls", this book is sure to please anyone searching to own their first Lovecraft book or someone that wants to find out if the rumours of Lovecraft being a horror master are correct.

Deep and Original, for the most part.

Published by Thriftbooks.com User , 22 years ago
If, when people speak of writing for the lowest common denominator, you are the person they're writing for, or if your idea of great fiction is the stuff that appeals to your basest emotions of lust, blood and action in the most shallow, contrived, and superficial manner possible, then this book is not for you, unless of course you're trying to atone for your literary sins. With the exception of "The Dunwich Horror" and "The Thing on the Doorstep", this collection of stories is among the greatest _literary_ outputs of horror fiction...Lovecraft has been called wordy, long, boring...but if you are truly an intelligent reader, you will, at the very least, realise that even if personally you don't like Lovecraft, this volume is still something extremely special, and very rare in the modern era. Lovecraft writes leisurely at first, he builds up the atmosphere convincingly, establishes a sense of not just the surroundings, but of cosmic outerness, and then slowly, he begins to shatter the reader's preconceptions about the nature of the universe, gradually building, actually describing and intimating the very nature and detail of the violation of natural law, until you can sense it, feel the cosmic forces pushing against you, and the final climax opens the gateway to the outer realms fully. Lovecraft does not write about people, and he does not write what was in his time pulp junk and which in our time is considered great writing; his task was to describe and reveal cosmic forces and outer hideousness, and his style reflects this, and fully complements his ideological position. If you find yourself best captivated by something deeper than Koontz or King, and are a sensitive mind, open to a world where anthropocentrism is dead and morality is a local phenomenon, where vast forces are depicted crushing down upon those who unwittingly have become aware of their presence....then this book is for you.
Copyright © 2020 Thriftbooks.com Terms of Use | Privacy Policy | Do Not Sell My Personal Information | Accessibility Statement
ThriftBooks® and the ThriftBooks® logo are registered trademarks of Thrift Books Global, LLC