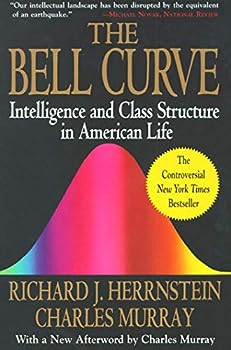 The controversial book linking intelligence to class and race in modern society, and what public policy can do to mitigate socioeconomic differences in IQ, birth rate, crime, fertility, welfare, and... This description may be from another edition of this product.

Published by Goody , 2 years ago
The amount of good material for the price is a must buy. You will learn alot of things from this book, however some of the interpretations or conclusions made by the author could be argued or disputed, but his points are far from baseless with page after page of detailed writing.

Meticulous and objective. I learned a great deal

Published by Pliny , 2 years ago
I am certainly not an expert, but I thought this book was well written and carefully researched. If you haven't had statistics for a while there is a review in the back of the book. This is a topic that has been debated for all of recorded history. Of course it is going to be criticized. However I think it is an important piece of literature on the subjects presented and it presents facts and fiction in a clear and concise way. I don't fully understand reviews that have strongly condemned this book. Read the Introduction carefully. The authors spending a great deal of time getting the facts right and accounting for possible flaws and misinformation. My psyc class in college spent one chapter on this subject and it interested me greatly. I really enjoyed all 687 pages.

This should be a MUST read for everyone

Published by TJOswego , 2 years ago
Well researched and documented. Tons of supporting proof. An eye-opener!

I don't like all the conclusions, but facts are facts.

Published by Thriftbooks.com User , 20 years ago
There is an interesting correlation between the style of the negative reviews of this book, and the ones you'll find on The Selfish Gene by Richard Dawkins, probably the world's most respected biologist. When mainstream science, even stated conservatively, goes against deeply-held and cherished beliefs, many people will jump to scarecrow arguments to attempt to discredit a deeply relevant and well-supported text.Even though my education is in psychology, I was not aware of what were even at the time (early nineties) empirically-derived observations essentially accepted without dispute by the psychometric community-- that there are in fact race differences in IQ. Of course, this is NOT the central theme of the book, it's simply the one that causes the most heartfelt emotional reaction. I'm reminded of fundamentalists who reject macroevolution but ignore or tacitly accept microevolution because they find it less threatening to their core beliefs. They only really go nuts about the stuff that hits close to home emotionally-- even though both concepts are equally well-established empirically.I would like to mention for the person considering purchasing this book to keep in mind that the authors stated their case conservatively-- they actually PULLED punches because they wanted their case to be so unequivocal and unambiguous that what they were stating could not be reasonably questioned by anyone analyzing the data, without presenting new data of their own (in other words, without using the scientific method themselves and bringing new data to light that contradicts an entire century of research that unabiguously supports their conclusions). There is no social agenda here that I can find. I found it to be very even-handed.I personally find a lot of the inexorable conclusions here depressing, as they indicate that many of our social problems are likely to be much more intractable than the political rhetoric would have you believe. But they do NOT advocate eugenics or any other racist or oppressive policy. And they DO repeatedly state that people of all races are represented in the full range of IQ's, from the dullest to the brightest. They also point out that two ethnic groups, of which neither of them is a member, have significantly higher IQs than whites. They do rather unequivocally advocate that we stop specifically subsidizing the births of children (of all races) who are irrefutably and apparently intractably at an enormously higher risk for every social malady that exists. That alone would be an enormous step forward.Read this book. Even if you violently disagree with whatever generalizations about this work you have heard, if you refuse to read it and consider the contents, and continue to think that there is no possible way this work has any validity, I invoke the observation of Carl Sagan: "The truth should withstand scrutiny." Your beliefs about the subject should withstand scrutiny if you are a scientific-minded person. This bo

Not the Book They Told You It Was

Published by Thriftbooks.com User , 20 years ago
This book is not about race. It's about intelligence, and how measured intelligence profoundly affects the lives of individuals in America. More than socioeconomic background, parents' marital status or anything else, intelligence correlates with education, income, employment, criminal behavior, disability, likelihood of being in automobile accidents, and just about everything else.And intelligence is largely genetic.This has ominous implications for American society. The highly intelligent largely work and associate with other highly intelligent people. They marry each other, and have highly intelligent kids. Murry and Herrnstein argue that an intelligence-derived class system is developing in America.Of course, it has even more ominous implications for people whose political credos rest upon the assumption that everything about an individual is socially conditioned and can therefore be improved by enlightened tinkering. These people, predictably, respond with wild accusations of "Nazi science!" This, of course, is a blatant and somewhat pathetic effort to taint the book so that no one will touch it.Ignore the screamers. Read this book.

Published by Thriftbooks.com User , 21 years ago
Readers who have not yet read this book will be surprised to learn that the main topic is not race, but how intelligence explains class structure. The authors argue that intelligence, not environment is the primary determinant of a variety of social behaviors, including class, socio-economic level, crime, educational achievement, welfare, and even parental styles. Hernstein and Murray back up these claims with some of the most persuasive data ever seen in the social sciences. The importance of a person's intelligence cannot be understated. Its is the number one determinant in shaping one's life. Hernstein and Murray do not stop there however. They go on, arguing that the bottom 15 percent in intelligence are simply not capable of taking care of themselves, falling into poverty, drugs, alchoholism, etc. American society can no longer accept such conditions for lower cognitive class. They make concrete suggestions on how to change this condition. They also make striking claims about the danger of affirmative action programs in promoting people who are not qualified to do important tasks. And finally, they deal with the issue that makes this book so controversial: The lower tested intelligence of African-Americans. At no point do they the claim the gap is only due to genetics. They suggest past environmental factors come into play. But their main point is that modern day racism cannot explain the gap, and programs designed to bridge that gap will fail, and putting underqualified individuals in important positions is not the answer. The authors really do not go into detail about why the gap exists, setting themselves up for criticism. But at least another scholar can research this topic and try and explain it. In sum, this book explains class structure in America, as well as the many of the social maladies of our time. It offers proof, and conrete solutions. It is a book of monumental importance, and cannot be denounced as racist. Those who make such claims either did not read the book, or are too biased to think objectively. As Murray notes in his new afterword, modern Sociology is riddled with taboos and self-censorship. The radical leftists who dominate the field do this country a great disservice by being so biased and non-objective. They also refuse to look at biology, relying only on environmental explanations, despite pyschology's growing reliance on genetic determinants of human behavior. The general public can only hope that the field right itself. Until it does, there will no solution to our most pressing social problems.

Published by Thriftbooks.com User , 22 years ago
The question is not whether a difference exists in IQ scores between whites and blacks, but why does the difference exist! Murray and Herrnstein give a fairly convincing argument that IQ is a factor in determining ones success in life. Blacks with an IQ of 120 are just as likely to graduate from college as whites or Asians with a similar IQ, and Murray and Herrnstein note that fact in their book. However, I do think that the authors did not provide convincing evidence that IQ is primary genetic. That's the flaw of the book. My second comment is about the racial aspect of the book. I am an African-American man, and I did not find the book to be racist. In our age of political correctness, anyone who writes about the differences between the races will likely face a firestorm of criticism, regardless of how accurate the content of the book. People of African heritage tend to run faster than people of European heritage. As a matter of fact, men of African heritage ran the top 30 times ever recorded in the 100-meter dash. If someone observed and commented about this fact, does that make him or her a racist? It certainly does not!

Published by Thriftbooks.com User , 23 years ago
In reading the synopses above and the few negative reviews below, I have to wonder if their authors read the book in question, or merely the media hype. This book is not about "ethnicity and intelligence." It's not racism, nor even about race. This book tries to show that A) people are becoming stratified according to intelligence (you go to school with, work with, and largely socialize with people of similar ability) and B) many of our social problems can be explained in terms of differences in intelligence (ie, in blunt terms, dumb people are more likely to commit crimes, etc.) They provide a huge base of data to support their thesis. The authors have bent over backwards to try to avoid any hint of racism in their studies; the only place the issue even arises is when they report that blacks and Latinos have historically scored lower in IQ tests than have whites (Asians have scored higher), and that the claims of "cultural bias" are not supported by any data or studies. These details alone are enough to inflame the politically correct among us, unfortunately. To portray this book as some type of white supremecist manifesto, you would have to have a strong agenda of your own, and totally disregard the content of the book.
Trustpilot
Copyright © 2022 Thriftbooks.com Terms of Use | Privacy Policy | Do Not Sell My Personal Information | Accessibility Statement
ThriftBooks® and the ThriftBooks® logo are registered trademarks of Thrift Books Global, LLC