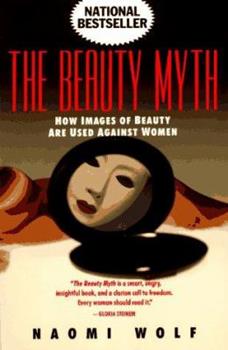 Beauty Myth: How Images of Beauty Are Used Against Women

Brilliantly persuasive, this is an exploration of the phenomenon of the violent backlash against feminism that uses images of female beauty as a political weapon against women's advancement."A smart, angry, insightful book, and a clarion call to freedom". -- Gloria Steinem

Overhyped, but I enjoyed the idea of it

Published by MattyVally , 2 years ago
I have heard a lot of great things about the book, but I was disappointed because it was full of studies and fact without a lot of personal or stories in the book. I thought that the studies were important, but I wish the author made it a bit less of a fact based writing and a bit more of a dialogue with stories sprinkled in. Overall, it was okay.

Response to defensive critic with*6 points

Published by Thriftbooks.com User , 4 years ago
I feel there are many opinions re: "societal norms" that I agree with. Just because many points were blown out of proportion and it's obvious why the anger exudes from other reviews. He degrades his woman"not normal lokking". Complains about his not being satisfied or considered partner. Wonder if he thinks blaming a victim of domestic violence is a novel defense method. .Beauty exists in various forms:external,internal(i.e. someone's character and sincere heart) Beauty is said to be in the eye of the beholder. As a woman,I know feeling beautiful is influenced by my emotional state,physical appearance and how my bf treats me. I too have low self esteem when I was bullied and frequently called UGLY,GROSS,ETC . Infidelity and widespread knowledge only added to poor self image.

Published by Thriftbooks.com User , 16 years ago
This book should be required reading for all freshmen girls. Even if you don't agree with its central premise or find its style infuriating this is something you should be talking and thinking about, especially as our culture increasingly sexualises young girls at earlier and earlier ages.

living up to the standard of female beauty

Published by Thriftbooks.com User , 17 years ago
In the Beauty Myth, Naomi Wolf (NW) mounts a stunning array of evidence to establish a surprisingly basic thesis: (*) That the media/advertisers/businesses use beauty as a standard standard that is applied solely to women (*) That this standard is then used in the workforce, and is the basis for hiring, firing, promotion, denial of promotion, sexual harassment, denial of charges of sexual harassment, etc. (*) That preoccupation with a media-imposed artificially-high and artificially-maintained standard of beauty keeps women preoccupied with things that are irrelevant to their jobs, skills, education, hard work, etc. (*) That in order to keep their jobs, advance professionally, and maintain a romantic relationship, women have to spend large sums of money, plenty of time, and pay a lot of attention to their looks -- in order to maintain the kind of look they see in magazines and advertisements, and which seems to be expected of them. NW makes many additional claims, and I, or any reader, for that matter, may chose to disagree with them. But the book is fascinating in the statistics and stories and facts it compiles. I found the book valueable if for no other reason than that it forced me to consider why beauty is applied only or mainly to women, and why it seems to be applied in areas to where it is irrelevant: Why should a female news reporter be expected to look like an anorexic fashion model? Why are her male colleagues judged by completely other standards? In establishing her case, NW does a superb job. An astonishing job. Sometimes, she does too good a job, in that the book seems to fire in too many directions, some of which are not essential to her main thesis. For example, the book gives off a distinct foul odour of religion-bashing, which is not really necessary for the central theses the author makes. I thought it was a low point of the book, where NW "explains" the rationale behind various religious practices and then relates these to discrimination against women. There is no religion that is THAT clear about the rationale behind its practices: Claims such as "Jews do X because of Y" and "Catholics do Z because of T" are almost always bound to be gross over-simplifications of religious practices and beliefs. A book on the myth of beauty is the wrong place, in my opinion, for a Reader's Digest guide to world religions, and religion-bashing does not serve the author's purpose. On the contrary, most religious leaders today would otherwise agree with NW wholeheartedly that for whatever social/economic reasons, female beauty has been used, abused, and made a tool that has de-facto enslaved the hearts, minds and bodies of women. NW has been generous enough, in the spirit of Betty Fridan's Feminine Mystique (which seems to serve as an inspiration for this book), to point out the toll that the [Feminine] Beauty Myth has taken on men as well: That genuine relationships are possible only when couples see each other as they are, and for w

Published by Thriftbooks.com User , 23 years ago
The cover quote calls this a must-read for all women. I would include men in that, as well. Or, at least all men who care about gaining greater understanding of women. I found that Wolf gets a bit heavy-handed at times, especially toward the beginning of the book, but she more than makes up for it with compelling arguments and plenty of supporting evidence. She opened my eyes to the reality of the ubiquitous, yet almost invisible, beauty myth, and I have been able to see many more examples on my own since reading the book. I feel the urge to give a copy to every woman I see who appears on the verge of collapse from self-starvation, or who seems ashamed of her natural self, unable to face the world without a mask of makeup.

This Book Is Really Kinda Cool

Published by Thriftbooks.com User , 23 years ago
I am always excited to read very different and original points of view, whether I agree or not, and this book is definitely one of them. Anyone who asks questions that have not been asked before and is willing to talk about things that make people nervous, angry, and scared have gained my respect. Does Naoimi Wolf have all the answers? No, and who cares? This is the kind of book that makes you think and consider. You do not have to adopt her veiwpoint to benefit from reading this fascinating and controversial book. Come up with your own conclusions! All the greatest books make you do that.
Trustpilot
Copyright © 2022 Thriftbooks.com Terms of Use | Privacy Policy | Do Not Sell My Personal Information | Cookie Preferences | Accessibility Statement
ThriftBooks® and the ThriftBooks® logo are registered trademarks of Thrift Books Global, LLC