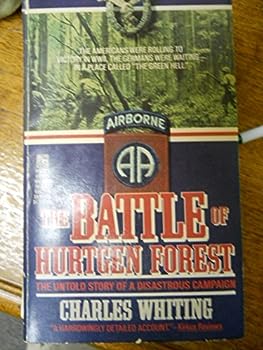 The BATTLE OF HURTGEN FOREST

"The U.S. Army regards the Hurtgen Forest as one of the most desperate battles it has ever fought. Flanking the key German city of Aachen, the forest was one of the formidable natural barriers interspe"

This Way To The Death Factory

Published by Thriftbooks.com User , 12 years ago
You can say what you want about Charles Whiting. Not a "credentialed" historian. Prejudiced against Americans. Plays fast and loose with sources and refuses to use anotate his work. Makes assertions which are demonstratably untrue. Recycles his own material like a cow chewing its cud. It's all true to some degree ...but it doesn't quite tell the story, either. Whiting has produced some important and very valuable studies in his long career, and while there are decided brown spots on some of his works, he's of that rare breed of historian - in which I would include John Keegan, Stephen Ambrose, David Irving, Alan Clark, and Richard Payne - who writes history in such a manner that people actually want to read it. That is to say, he has some sense of literary aesthetics and an entertaining prose style (the majority of historians can't write to save their a**). THE BATTLE OF THE HUERTGEN FOREST is one of his best books, not only compulsively readable, but tackling a part of WW2 very few Americans know about - mainly because it was conveniently edited out of the postwar histories (including Eisenhower's entertaining exercise in selective memory, CRUSADE IN EUROPE.) And after reading Whiting's brutal saga of stupidity and slaughter, it's easy to understand why. For the record, the Huertgen is a fifty square mile triangle of primeval forest, in the border country between Belgium and Germany. In 1944 it was weakly held by the Germans, who quite rightly believed no one would be stupid enough to attack through it, much less the Americans, who had just demonstrated their mastery of mobile, open-country warfare while liberating France. Forget the fortresses of Metz or the "impregnable" Siegfried Line - the forest itself was a nearly impenetrable barrier, one which negated Allied air superiority, made wheeled movement impossible, rendered tanks almost useless, and generally favored the defender in every way. For reasons that have to do with ego, bad judgement and a kind of horrible, bureacratic momentum (a sort of throwing good blood after bad), one American division after another was nevertheless fed into what the GI's referred to starkly as"The Death Factory", a decision which eventually cost the U.S. Army 30,000 men, and which becomes all the more appalling when one takes into account the strategically worthless nature of the forest itself. Told from both sides, Whiting's book recounts the heroic and often futile attempts by the American army to bludgeon their way through the stubborn German resistance, sparing no detail of misery that the soldiers in question had to endure: the impenetrable darkness of the nights, the mud, the freezing rain, the lice, the dank, stinking dugouts, the artillery blasts that would turn the trees into hailstorms of shrapnel, the screams of wounded or shell-shocked men, the confusion and maddening disorientation. (Whiting points out rather acidly that William Westmoreland was a regimental commander during this fighting, and

The "Death Factory" in a dark forest

Published by Thriftbooks.com User , 19 years ago
I thought the book was well written although the maps included never seem to show the places and landmarks described in the chapter it is placed.I feel the author does an excellent job of communicating the conditions in which the fighting took place: the dreary, dark, forest that seemed to close in on the soldiers, the dampness and the cold, the difficult terrain of ridges and canyons.The author also does an excellent job of explaining how personal pride and reputation led to feeding division after division, regiment after regiment into a meat grinder that made no strategic difference to the overall campaign. The book shows the complacency of allied "Top Brass" - as he continually refers to them - who thought the war was as good as won. It also shows a detachment of the generals from the guy with a rifle getting shot at every day that is appalling - Ike and the generals living it up in Paris while the average riflemen is trying to stay dry and warm in a foxhole half-filled with water.On the other side of the fence, in spite of repeated decimation of their ranks, the Germans were still able to put up a deadly defense. One of the most important points of this book is the complete reliance by American infantry on support weapons such as artillery and air power. When those assets were missing, such as in the dense forest, American troops were less effective than the Germans who focused on tactics, unit cohesion, and individual initiative.There are a lot of lessons for military professionals and historians in the Hurtgen Forest - and they should be learned.

Published by Thriftbooks.com User , 19 years ago
Mr. Whiting gives a perfect recollection of the different divsions' struggles in that (otherwise beautiful) part of Germany. I have but two remarks. The first the popular reference to the commanding officers as 'Top Brass'. If you use it too much it just gets annoying! Then there is little graphical support of the text. Small situational drawings would have done miracles here. But considering all its a good book.

SHAEF asleep in the Death Factory

Published by Thriftbooks.com User , 20 years ago
The battle of the Hurtgen Forest has been long ignored by historians and the armed forces because it was a defeat of the first order for the United States. The infantry that fought there called it the Death Factory. Whiting's book delves into the details of the battle itself and the decisions that fed so many young men into a meat grinder. The allied (particularly the American) high command was ignorant of the conditions at the Front and willingly sacrificed the advantages of air power, armored mobility, artillery superiority (the German defenders were well bunkered) and resorted to the bloodiest of methods, the infantry assault through dense vegetation. Whiting's book provides details from the front line troops to underscore the horrid conditions, battle statistics to emphasis the slaughter that was occurring, and accounts of what the top brass was doing simultaneously. The argument is sufficient to convince me that SHAEF was driving with its eyes closed. The butcher's bill ran higher and higher, the Generals thought surely the Germans would break at any time. Tactical and strategic thinking was thrown aside in favor of a "kill Germans where ever you find them" philosophy. The American Generals were caught up in their own glorification and didn't consider the possibility that they could be making a mistake, if enough man power was committed, the Wehrmacht and Field Marshal Model would break. The Germans couldn't understand why the Americans were attacking in such force through the forest but were more than happy to deal with the unfortunate attackers slogging unprotected through the dense woods. It became personal to the American Command, their reputation and the reputation of the Army were at stake. A price was even put on Field Marshal Model's head, how dare he slow up the glorious Americans and their Generals. Interestingly enough, 30 odd years later, the junior officers who survived the Hurtgen fed young men into the meat grinder known as Vietnam where the logic of "body counts" reappeared.The Anglo-American allies certainly had their shining moments in the second world war, they also had their low points. The Battle of the Bulge has long been studied as the point where SHAEF was caught asleep but still managed to "win". The battle of the Hurtgen forest was where they dozed off. Sadly they were counting divisions of young men that they sent into Death Factory as they slept.
Copyright © 2020 Thriftbooks.com Terms of Use | Privacy Policy | Do Not Sell My Personal Information | Accessibility Statement
ThriftBooks® and the ThriftBooks® logo are registered trademarks of Thrift Books Global, LLC