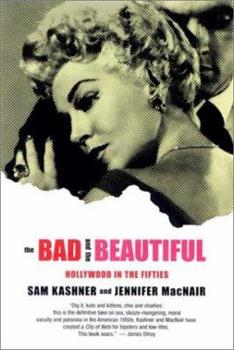 The Bad and the Beautiful: Hollywood in the Fifties

by Sam Kashner and Jennifer Macnair

With fresh emphasis on little-known stories [and] an impressive number of eyewitnesses (Chicago Tribune), Sam Kashner and Jennifer MacNair present a revealing, ...ever fascinating glimpse into the shadowy reality and hidden mores of Hollywood in what was popularly considered a decade of innocence (Suzanne Finstad). [S]urprisingly vivid accounts (People) of such public icons as Lana Turner, Rock Hudson, Kim Novak, and Mae West explore the private scandals...

Published by Thriftbooks.com User , 15 years ago
This terrifically readable cultural history of Hollywood in the Fifties was inspired by James Ellroy's wish to the authors that there were a book about the era as fine as Otto Friedrich's CITY OF NETS; the authors admit they could not quite match the comprehensiveness of Friedrich's achievement, nor are they quite as erudite or analytically sophisticated. But, in their best chapters (on the culture of Hollywood expatriates, and in fine narratives of the making of REBEL WITHOUT A CAUSE and NIGHT OF THE HUNTER), they come close to matching the engaging tone of and gossipy frisson engendered by Friedrich's famous book. The initial chapters on the scandals covered by and created by "Confidential" magazine read more like Kenneth Anger's HOLLYWOOD BABYLON than Friedrich, but as the study continues it just gets better and better. I didn't want it to end.

Odd Stories of Movies and Their Creators.

Published by Thriftbooks.com User , 16 years ago
Tantalizing and sometimes dark stories about the movie creators of the 1950s: writers, producers, directors, and yes, even a few of the actors are profiled here with intelligent prose and well documented detail. The chapter on the ill-fated, but brilliant playwright, William Inge, is alone worth the price of the book.

A vivid inside portrait of sex and power games

Published by Thriftbooks.com User , 19 years ago
Bad & The Beautiful is a fascinating and informative history of Hollywood in the 1950s which offers a vivid inside portrait of sex and power games, from the rise of tabloid journalism to the rise of legendary film icons. The authors focus as much on cultural trends and perceptions of stars and Hollywood as upon the films and creations that kept it in the limelight of American culture and innovation.

Published by Thriftbooks.com User , 20 years ago
Great! Awesome! Fabulous! The Bad and the Beautiful was sexy and super-fun. It was a great summer read. I was looking to find out more dirt about the hey-days of tinsel town. The authors did a great job at making you feel the glamour, the drama, and the gossip of the time. It was definitely worth the time.

Published by Thriftbooks.com User , 20 years ago
Despite current nostalgia, 1950s Hollywood was a particularly strange and interesting era. It had commies to contend with, and even more seriously, television and the dismantling of the studio system. The fifties have been regarded as a bland cinematic decade, but there were some astonishingly thoughtful and influential films that became revered by French filmmakers and current Hollywood ones. The period is reconsidered in _The Bad and the Beautiful: Hollywood in the Fifties_ (W. W. Norton) by Sam Kashner and Jennifer MacNair. The authors admit that this is not a comprehensive history of that period in Hollywood; indeed, it is surprising that they have no chapters devoted to westerns or to science fiction. They call their book instead "a kind of archeological dig by two writers too young to have experienced the decade firsthand," and as such, it is a useful reminder of such things as the blacklist, novel and provocative tabloid journalism, influential gossip columnists, and a good deal of scandalous dirt.Plenty of the scandal is sexual, of course, and some of the stories are not at all new. Rock Hudson had a powerful effect on women, and one actress tried to get him to show proper affection on screen, begging a director, "Can't you get Rock to kiss me properly?" The director, Douglas Sirk, "declined, knowing why Hudson's kisses seemed awkward." Lana Turner gets a chapter, including tales of her promiscuity, as does Mae West and her hilarious geriatric sensuality. The forgotten affair between Kim Novak and Sammy Davis, Jr., gets an airing, too. Billy Graham's first religious film is included, as are the more familiar biblical epics of the period. There are excellent chapters here about particular films, like _Peyton Place_, _Sweet Smell of Success_, and _Rebel Without a Cause_. Did you know that in that last film, director Nicholas Ray hunted hard for the three leads, James Dean, Natalie Wood, and Sal Mineo, and seems to have had affairs with all of them? And James Dean did, with Natalie Wood, who also was with co-star Dennis Hopper. The book starts with _Sunset Boulevard_, a film it refers to through many chapters. In it, Gloria Swanson made her peculiar comeback as the bypassed and doomed silent film queen Norma Desmond. The book ends with the presidential campaign of John F. Kennedy, whose father had had an affair with Swanson, and whose campaign had unprecedented ties to Hollywood and its stars. In between is a wealth of the sort of trivia, titillation, and sleaze that could only come from Hollywood. Kashner and MacNair love their theme, have picked their subjects well, and have juicy bits to reveal to anyone interested in the movies.
Trustpilot
Copyright © 2022 Thriftbooks.com Terms of Use | Privacy Policy | Do Not Sell or Share My Personal Information | Accessibility Statement
ThriftBooks® and the ThriftBooks® logo are registered trademarks of Thrift Books Global, LLC