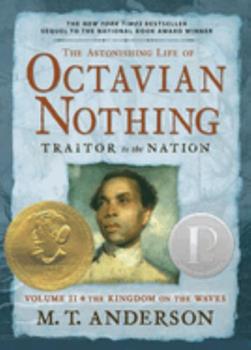 The Astonishing Life of Octavian Nothing, Traitor to the Nation, Volume II: The Kingdom on the Waves

(Book #2 in the The Astonishing Life of Octavian Nothing, Traitor to the Nation Series)

Sequel to the National Book Award Winner "A novel of the first rank, the kind of monumental work Italo Calvino called 'encyclopedic' in the way it sweeps up history into a comprehensible and deeply textured pattern." -- The New York Times Book Review Fearing a death sentence, Octavian and his tutor, Dr. Trefusis, escape through rising tides and pouring rain to find shelter in British-occupied Boston. Sundered from all he knows -- the College of Lucidity,...

Published by EH , 7 months ago
This is the second book in the series, I highly recommend reading The Astonishing Life of Octavian Nothing, Traitor to the Nation, Vol. I: The Pox Party first in order for this one to make sense. I also highly recommend that the reader of both of these books be over 18 and familiar with American history in the mid and late 1700s because of the detailed information in these books.

A unique YA historical fiction worth the read!

Published by Thriftbooks.com User , 11 years ago
Any Printz Award book is interesting, and this one is really something new and different--a YA book about the American Revolution and Slavery like nothing I've ever read. Excellent, high-quality, and interesting to almost anyone.

Published by Thriftbooks.com User , 12 years ago
For those of you who immersed yourself in the world of THE POX PARTY, you must read M. T. Anderson's second volume, THE KINGDOM ON THE WAVES. I would highly recommend you read the two volumes in order. In volume two, Octavian escapes the cruelty of Mr. Gitney and, with his former tutor, Dr. Trefusis, on his back, flees across the mud-flats to Boston. Once there, they are able to find lodging, trading only upon the name and reputation of the deathly ill Dr. Trefusis. With war closing in on Boston and their hostess in dire need of payment, Octavian once again finds himself with violin in hand, earning a small amount to apply toward their room and board. At this point, I was still cheering for Octavian, the escaped slave, hoping that he finally would find joy, peace and, most of all, freedom; yet at the same time, knowing that there must be more challenges ahead. As the Revolutionary War advances, Octavian hears that the Royalists are promising freedom to all slaves who fight for the King of England. He joins and dons his uniform, a shirt inscribed with the words "Liberty to Slaves." We are immediately immersed in the struggle to prepare an ill-equipped regiment for war. He becomes a member of Lord Dunmore's Ethiopian Regiment. Here, for the first time, he is surrounded by other slaves who speak other languages. They tell glorious tales of their homes in Africa and sing rousing songs that make his heart pound. They see him as different, a white man in a black body, and brand him with the name Buckra. Octavian marches into his first battle behind other regiments, amazed that those first to confront the Rebels are little more than a sacrifice. He does not understand the logic behind this type of fighting. It's not long before they are in retreat, fellow soldiers dead and dying all around, and something inside Octavian changes. How can it not? With the Rebel force surging into Boston, the Royalists take to their ships. Octavian and the Ethiopian Regiment find a new level of darkness in the bowels of their ship. They spend weeks, nay, months, aboard their watery foundations. Rations are less than sparse and sickness begins to spread. It's a relief to row ashore, even if it is to burn Boston out from under the rebels who have claimed it. Men die. Men kill. Octavian knows not whether it be his bullet or another which steals life. Back aboard ship, the monotony begins anew, broken only by the occasional duties on deck, and the visits of women as they gather laundry, including Nsia, the woman of beautiful voice and dance who takes his tongue and ties it in knots. He is relieved when Dr. Trefusis visits his ship and bades him fill the empty void with studies while they listen to stories of bravery and ingenuity. Stories of slaves escaping their masters to join the promise of freedom offered by Lord Dunmore and his Royal Navy. Octavian learns much about his mother's tribe in Africa from another soldier from that nation. And as small pox devastates the

"History is not a pageant arrayed for our delectation"

Published by Thriftbooks.com User , 12 years ago
THE KINGDOM ON THE WAVES is the second volume in M. T. Anderson's historical epic The Astonishing Life of Octavian Nothing, which is set in colonial America on the eve of the Revolutionary War. Octavian is a slave who has been raised in isolation at the College of Lucidity. In the first book, THE POX PARTY, Octavian comes to realize that he is part of an experiment on ethnicity and intelligence. After the death of his mother, he leaves the college and experiences the difficulties and hazards of living in the outside world. Recaptured, bound in chains and silenced with an iron mask, THE POX PARTY ends with one of his teacher's helping him to escape. This follow-up begins with the two fugitives running to British-occupied Boston, where Octavian finds work in an orchestra entertaining British officers. It is not long before Boston comes under attack from the colonial rebels. When Octavian hears that Lord Dunmore is raising a troop of African soldiers, he enlists with the British on the promise that he will earn his freedom by fighting for the Crown. Instead, Octavian learns that serving as a soldier is another kind of bondage, especially for the dark-skinned Royal Ethiopian Regiment. Consisting primarily of escaped slaves, the promise of freedom wanes as the fortunes of war turn against the British. THE KINGDOM ON THE WAVES features the Revolutionary War as readers have rarely encountered it. It is a tale of desperate yearning for freedom among those who will be returned to slavery should the colonial rebels attain their goal of independence. The Royal Ethiopian Regiment is the first experience Octavian has spending time with a large group of his fellow slaves. They come from a variety of nations and backgrounds, and English is often the only language they share in common. He is quickly given the name 'Buckra,' "...which is their word for a white man;" Octavian writes, "for having seen me read, they say that I am a white man hidden in a black skin.... And I have just called them 'they.'" Octavian is moved by the experiences of other men in his regiment and writes down their stories in his book. Some are funny, some poignant, but many speak to the brutality of enforced servitude. Among his companions he finds someone who is from the same Oyo nation as his mother. Before she died Octavian used to beg her to tell him "One true thing." He discovers she deliberately hid the truth about her origins to protect him, telling him instead that she was a princess and he a prince. Other truths emerge: That freedom is not promised to the slaves of loyalist subjects, only to slaves escaped from rebels. That half the regiment is to be sold to the "Sugar Isles" --- the sugar plantations in the Caribbean where human life is so cheap that slaves are often worked to death instead of being given adequate shelter and sustenance --- to recuperate British financial losses. Octavian's idealism disintegrates amongst the stark realities of warfare. Starvation and disea

Published by Thriftbooks.com User , 13 years ago
I have just finished listening to the audible version of Octavian Nothing, and it seems fitting that we have just elected an African American to be our President. I think Octavian would have been so happy to know this. Octavian is one the most complete, complicated, heartfelt characters a reader will come upon. Learning the plight of the African American soldiers who fought on either side of the revolution, was an education, and because of the wonderful story telling, and authentic period dialogue as well as narration, an adventure I was sorry to have end. Octavian is real to me and has touched my heart in the deepest of ways. Beckie Weinheimer Author Converting Kate Viking Books 2007
Copyright © 2020 Thriftbooks.com Terms of Use | Privacy Policy | Do Not Sell My Personal Information | Accessibility Statement
ThriftBooks® and the ThriftBooks® logo are registered trademarks of Thrift Books Global, LLC