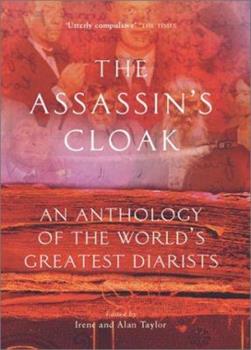 The Assassin's Cloak: An Anthology of the World's Greatest Diarists

by Irene Taylor and Alan Taylor

This is an anthology of some of the world's greatest diarists, with over 200 wide-ranging, international contributions. It is laid out day-by-day and a typical date might feature entries from such distinctly different writers as Andy Warhol, Kafka, Pepys and Goebbels.

The good, the bad, and the ugly - a little bit of everything in here!

Published by Thriftbooks.com User , 13 years ago
Fascinating stuff. The book progresses through each day of the 366 (leap year, too) calendar days. Excerpts from all the diaries are organized in chronological order (from earliest year to most current year) within each day. The earliest you get is from the 1600s (usually Samuel Pepys) on up through Alec Guiness and others in the mid 1990s. The excerpts vary from only one phrase to about a page. The stuff from the 1660s is rendered with its own peculiar spelling and grammar. You really get an amazing sense of our shared humanity across the ages. I deemed its only overall flaw to be a preponderance of British entries and World War II entries. Plus, two entries I wished I hadn't read: the artist Delacroix blandly witnessing the mistreatment of a horse, and some English guy shooting a heron. The excerpts from Jewish diarists right before the Holocaust were chilling. There were diarists who became my favorites: Eleanor Coppola (a shy woman in a high-profile world); Virginia Woolf (wonderfully perceptive about herself and her social class); Noel Coward (often hilarious); Alan Bennett (gentle irony); Evelyn Waugh and H.L. Mencken (both funny like Coward but even more acerbic); Andy Warhol (so banal); and Katherine Mansfield (haunting). There were other diarists I grew to dislike: Goebbels (fanatically anti-Semetic); Brothers Goncourt (misogynistic); Alan Clark (also misogynistic); Marie Bashkirtseff and Liane de Pougy (twits); and Leo Tolstoy and Franz Kafka (both morbid and difficult). Overall, a varied and fascinating window on the world of journal-keeping.

Published by Thriftbooks.com User , 15 years ago
For a compulsive reader or diary-phile, I can't imagine a better day book to accompany you through a year. To take 10 minutes out of the day and read the wonderful (really--I wondered at some of the things that people would write in the diaries) selection of entries for the day will provide you with a refreshing start, bookend, or break for your day (your choice). Even the potted biographies of the diarists (found at the back of the book) are delightful. The authors have provided some lovely groupings of entries. January starts off with three entries from Mahler's lover, stretched over three successive days, that made me laugh. More complex emotionally is the chain at the end of January: two different diarists record the death and funeral services of George V of England in 1936, along with the assencsion of Edward III. A few days later is a recollection of meetings between Charlie Chaplin and Edward III (now the Duke of Windsor after renouncing his crown for Wallis Simpson) in the middle of World War II. Towards the end of January, in the 1930's, Count Ciano records the advice he gives Mussolini--on the same day, but in 1943, a nurse records the arrival of refugee children evacuated from Italy. Some small errors in the bios at the back that I noticed: Goebbels kept his diary right until 1945 (not just until 1941); Delacroix did start his diary at 24 but dropped it after 2 years and did not resume it until he was 50 (the bio suggests that he kept his diary continuously); Pepy's diary wasn't kept in code but written in shorthand (a contemporaneous book describing the system Pepys used has been discovered)--but these are hardly the point with this delightful book. On the other hand, I didn't think that Woodeforde's diary revealed author to be a glutton (as the editors suggest) but I may not have read between the lines sufficiently. I found this book on the remaindered shelf of my local bookstore (a crime!) but it even made the price right for me: $7.00 Canadian. Wonderful book.

Published by Thriftbooks.com User , 18 years ago
Reading diaries from the dead, has always made me feel like a voyeur, looking into half open windows, the curtains partially drawn, and seeing what shouldn't be seen. Granted, some diarists write to be read, while most, in my opinion, do not. But there is a kind of sweet pleasure in committing a misdemeanour and getting away with it - which is the sensation one feels when reading this anthology.There are some 170 diarists in this anthology, some well known and others not so, and well over 1800 entries, containing profound thoughts of the time from a few great historical figures to the routine-filled humdrum of the day-to-day. The humdrum day-to-day, in most cases, was a lot more interesting because it is usually what people do everyday that provides insight into their character and the times in which they lived.On the front flap of the cover is a single line that really defines a great diarist - "The best diarists are those who write without looking over their shoulders." That total lack of self-consciousness, that pure honesty that comes with writing about self and others, is certainly a pleasure for the reader. For example, a simple line, almost an after thought, written by the French novelist, Andre Gide - "It requires a great effort to convince myself that I am as old as those who seemed to me old when I was young."Because this anthology includes both famous diarists and those not so famous, many unknown individuals in some cases, there is a biography section at the back which gives a brief history for each contributor, that for me, managed to provide enough background information for the entries to be much more meaningful.As with most anthologies, one does not necessarily need to read them chronologically, but can dip, skip and choose ar random as the particular mood dictates. This is the perfect book to have by your bed to read a few short or long entries before falling to sleep. One can sample a taste of the 16th century with one of the most famous diarists, Samuel Pepys, and jump a few pages ahead to read Andy Warhol and his unusual observations about some famous people and New York's art world of the sixties.Great stuff.

Why Isn't This Book Better Known?

Published by Thriftbooks.com User , 19 years ago
I don't recall hearing any press buzz when this book came out, and I can't understand why. This is a brilliantly edited collection of excerpts from diarists both famous and obscure. Some of the most interesting entries were written by total unknowns, including people of whom one would not even suspect literacy. One-paragraph biographies of all diarists appear at the end of the book, for reference. The genius of the editors, which sounds like a gimmick but isn't, is their arrangment of the excerpts by the month and day that the entries were written. Within each day, the entries jump magnificently from century to century, and from author to author, so that the voices that the reader hears, and the perspectives on history and society that the reader gains, are constantly shifting. For example, entries of European Jews in the midst of the Holocaust are juxtaposed with British entries from the same era--and German entries from twenty years earlier.The format makes for more richness of texture than any one diarist could. This book calls to mind Thomas Mallon's _A Book of One's Own_. Mallon's book groups diarists by type, however, not entries by day, and Mallon provides a great deal more commentary than the editors of _The Assassin's Cloak_ do. The Taylors let their own quirky choices of entries provide implied commentary.Warning: this book is 600 pages long, and highly addictive. A must read for anyone interested in diaries and journals.

A sumptuous feast for the diary-lover.

Published by Thriftbooks.com User , 19 years ago
This huge, juicy anthology is packed chock-full, in chronological order, of tasty tidbits from diarists of four centuries -- some the usual suspects (Pepys, de Beauvoir, Warhol), others you've probably never heard of, or at least not in this context (who knew Brian Eno kept a diary?). Some were writing for themselves alone, others knew darn well their journals would be published some day. All are eminently readable and completely intriguing. Expect to spend many happy evenings curled up in a chair reading May Sarton's opinion on why people under 40 shouldn't live alone, Liane de Pougy's memory of her wedding night, Noel Coward's description of a Beatles concert, Stendahl's observation that eating peas made him less lustful, and many, many more.
Copyright © 2020 Thriftbooks.com Terms of Use | Privacy Policy | Do Not Sell My Personal Information | Accessibility Statement
ThriftBooks® and the ThriftBooks® logo are registered trademarks of Thrift Books Global, LLC