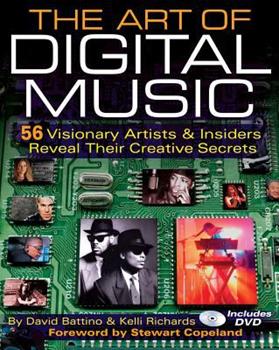 by David Battino and Stewart Copeland

Creative Insights are the Big Value

Published by Thriftbooks.com User , 16 years ago
I liked this book quite a bit; not because it gave me step-by-step instructions on how to create music using digital technology, but more to the point because it didn't. Any book on music technology can become dated quite quickly, but when one concentrates instead on hearing a very wide variety of artists, producers, technologists and industry executives talk about how they *think*, then you have something that if not timeless is at least fresh and interesting for some time. Knowing how Todd Rundgren approaches producing or songwriting is way more valuable than knowing which button in ProTools does pitch correction.

Published by Thriftbooks.com User , 17 years ago
I was absolutely mesmerized by this book. The people profiled in the book are so diverse and facinating - true pioneers in their fields. Many of them I was familiar with but have a whole new respect for after reading this book. The interviews are intelligent and creative, questions I would have asked them myself. The tips and advice are invaluable as well. Rarely do you find a book on digital technology that you can't put down, but this is one of them. For anyone who loves music and technology, this book is a must.

Published by Thriftbooks.com User , 17 years ago
I think this is a great book. The authors have done a tremendous job tracking down such an eclectic group of music visionaries and I found the majority of the interviews to be really interesting. High points for me were the interviews with Steve Reich who really gets to the core of the digital music phenomenon. I strongly recommend this book to all musicians and recording engineers who want to learn the creative secrets of the masters. The value of this book is worth many times its cover price.

From the mouths of musicians

Published by Thriftbooks.com User , 17 years ago
The music industry is undergoing the most dramatic changes since electricity first allowed performers to be heard over the airwaves. In the daily press, all you read about are the financial woes that beset the record labels in the wake of Internet piracy and outdated business models. Well, there's another dimension to the story, one that "The Art of Digital Music" covers well: how digitalization is changing music itself, as told by the people who actually create and record the music. And so we have Phil Ramone talking about Pro Tools, and Alan Parsons musing on the power of repetition, and David Fagin talking about artists' rights in the digital age. The second half of the book delves into the nitty-gritty of under-the-hood studio production tricks, plus some thoughts about the future of digital distribution. But it's the first half, by 56 artists and music insiders, that gives the book its heft. If you're part of the music industry today, David Battino and Kelli Richards' book is indispensable. If you're not, it's just a fun read.

Published by Thriftbooks.com User , 17 years ago
I think this book is superb. It touches on just about all the major angles and issues of the Digital Music world. Past and present, from yesterday's genius pioneers (and some digital martyrs) to today's innovators who use the technologies in ways that the creators never imagined, as I discovered in the book. The interviews are concise, philosophical and highly educational. Insights range from BT and The Crystal Method to Thomas Dolby, Brian Eno and Dave Smith (the man behind MIDI). It doesn't matter what kind of music you're into, it seems that everybody has something to say on the subject. (From the Production of the music to the delivery methods of the new paradigm....for better and worse!) I feel that anyone with an interest in this growing field will find it beneficial to hear what these folks (both interviewers and interviewees) have to say. They are the people who shape both the technology and art of the digital movement. Great job Mr.Battino and Ms. Richards. Highly recommended.
Trustpilot
Copyright © 2022 Thriftbooks.com Terms of Use | Privacy Policy | Do Not Sell My Personal Information | Cookie Preferences | Accessibility Statement
ThriftBooks® and the ThriftBooks® logo are registered trademarks of Thrift Books Global, LLC