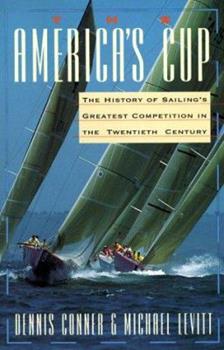 by Dennis Conner and Michael Levitt

Once a competition held exclusively for wealthy members of the New York Yacht Club, the America's Cup has undergone significant transformations in the 20th century. No longer a yachting event limited to Morgans and Vanderbilts, the race now includes boats skippered by athletes who are not among the country-club elite.

Published by Thriftbooks.com User , 22 years ago
For those who have read and enjoyed Conner's previous America's Cup book "Comeback", this book serves as a kind of sequel and overview of the competition that has become the obsession of many professional sailors and designers. While informative in its historical content, Conner can't seem to resist the temptation to tell a good story whether it be the imfamous Mariner design or the controversies surrounding the 1995 campaign. All in all, an enjoyable and informative book, and a must have for AC/DC addicts.

Published by Thriftbooks.com User , 24 years ago
Dennis Conner and Michael Levitt have captured the essence of what the America's Cup is. From the first few chapters giving a good history of the orgin and classes of yachts used throughout the first 133 years of the America's Cup, to Dennis Conner's own first hand knowledge of the races he has been involved with, the reader is propelled into all phases of the event.Of particular note are the accounts of the controversial 1988 races, the competition with the first editions of the International America's Cup Class yachts, and the story behind the story of "keelgate" in the 1995 Cup, which saw the trophy once again leave the U.S.For true Cup affectionados, this is a must read of America's Cup history. No one individual has been as involved in the modern day evolution of America's Cup racing as Dennis Conner. His perspective of the history of the event is compelling, candid, and not without controversy.
Trustpilot
Copyright © 2022 Thriftbooks.com Terms of Use | Privacy Policy | Do Not Sell My Personal Information | Cookie Preferences | Accessibility Statement
ThriftBooks® and the ThriftBooks® logo are registered trademarks of Thrift Books Global, LLC