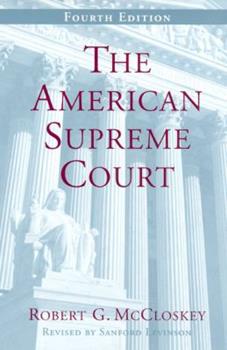 First published more than forty years ago, Robert G. McCloskey's classic work on the Supreme Court's role in constructing the U.S. Constitution has introduced generations of students to the workings of our nation's highest court. In this fourth edition, Sanford Levinson extends McCloskey's magisterial treatment to address the Court's most recent decisions, including its controversial ruling in Bush v. Gore and its expansion of sexual privacy in Lawrence...

A concise history of (the top of) the "least dangerous branch"

Published by Thriftbooks.com User , 17 years ago
There are a surprising number of ways to approach and review this book, given that its original length was only 160 pages, give or take. True, Sanford Levinson, Robert McCloskey's disciple while a graduate student at Harvard University, has added approximately 100 pages to his mentor's text, covering the 45 years of constitutional jurisprudence that has developed since the book's original publication. Even at 260 pages, though, you'd think more narrative would be required adequately to tell the full story of one of the three co-equal branches of the federal government. The length of the book, I would argue, is both its strength and its weakness. First for the weakness. I believe the book loses some explanatory power by neglecting the development of internal doctrinal developments in the Supreme Court, purely as a matter of constitutional law. For example, G. Edward White in The Constitution and the New Deal and Barry Cushman in Rethinking the New Deal Court (both of which I highly recommend, by the way) have put forth compelling (though not water-tight) arguments that stress the development of constitutional law over decades as a way of understanding legal change in the 1920s and 1930s. Also, McCloskey, outside of his treatment of John Marshall (which is really, really adulatory) does not show how different justices have brought personal proclivities or intellectual strengths and weaknesses to bear on their efforts to change, or maintain, the law. There is no discussion of the often fascinating game of coalition building in the Supreme Court, except the passing mention of such giants in this regard as Joseph Story, Felix Frankfurter or William Brennan. But to a certain extent this is merely criticizing McCloskey and Levinson for writing a book they never intended. For what it purports to accomplish this book does an excellent job, all the more so for its brevity. The prose clearly and succienctly anchors the Supreme Court as a political institution struggling to maintain its institutional place in the American government and its voice in the construction of public policy. The authors argue this has been done most effectively when the Court decides cases within general political parameters deemed acceptable by the majority of Americans. It is not, therefore, usually a counter-majoritarian institution. The Court has failed, conversely, and cost itself valuable institutional and political capital, when it oversteps those parameters. The most notorious examples of the latter include the Dred Scott decision, the series of holdings from 1934 to 1936 when it categorically shut off President Roosevelt's attempt at socio-ecoonomic reform, and the Bush-Gore litigation of 2000. The Court has been more successful when it cogently articulates its adherence to the Constitution's "fundamental law" as ultimately compatible with a given political era's view of popular will. Thus, for example, the gradual development in the first three generatio

Published by Thriftbooks.com User , 17 years ago
McCloskey's book is about the institutional history of the Supreme Court and its development vis-à-vis the other branches of government. The text is beutifully written and original, full of insights, compelling arguments and interesting analysis. Constitutional law, political science and history criticism at their best. A true must-read.

Published by Thriftbooks.com User , 18 years ago
Robert McCloskey has written an excellent book about the History of the Supreme Court. Throughout the book, he has discussed landmark court decisions that have influenced United States history and the structure of the judicial branch of our government. Little was written about the structure and function of the Supreme Court by our forefathers in the U.S. Constitution. It is for this reason that the judicial branch is the weakest branch of government. For example, the number of justices has changed several times in U.S. history. McCloskey describes how the Supreme Court was designed, how it developed and what it has become today. He unveils how politics played an important role in the history of the Supreme Court. It was surprising to read about how important U.S. history and politics have been in shaping the court as we know it today. Furthermore, McCloskey illustrates how conservative the court has been in making decisions and how unpopular decisions affected the status of the court. In some cases, the Supreme Court even rendered decisions just to save itself. The court's decisions may not have always been widely accepted or even considered correct. It is for this reason that the Supreme Court has struggled to maintain its power, respect and legitimacy from the time of it conception. Overall, the book was an easy and interesting read as part of a Constitutional Law course in the Political Science Department at the University of Chicago. I believe the book and my professor did a great job of describing the history of the Supreme Court.

Published by Thriftbooks.com User , 24 years ago
As I read the McCloskey book, I was deeply impressed with his explication of the matter-of-fact ways by which our Supreme Court has gained and maintained respect, power, and legitimacy. However, there is one main criticism. As McCloskey candidly admits in the preface, "...my aim is to see the Court as an agency in the American governing process, an agency with a mind and a will and an influence of its own" (McCloskey, , 1994, xvii). Operating under such an assumption, it is not surprising that his argument becomes schematic and implicitly rejects historical contingency as a dominant explanation for the development of the Supreme Court. As result, his book is primarily useful in helping us to understand the actions the court takes during well-defined periods, such as the life-span of its members. Nevertheless, I think a somewhat unseen strength of this book is its pragmatic advice for members, as opposed to students, of the Court. In particular, ! when McCloskey explains with such precise detail how and why the "brethren" were able to "conquer a judicial empire" (McCloskey, 1994, pp. 23) his peculiar word choice makes him fit well with Niccololo Machiaveli, who in a passage from The Prince, (with similar motives?) writes, I hope it may not be considered presumption if a man of low and humble condition dare to discuss and lay down rules for the government of princes.....[but] if your Magnificence will read and study [them] carefully you may obtain the summit of greatness which fortune and other qualities promise you (Machiaveli, 1947, xiii~xiv). Does McCloskey's work contain an equivalent "recipe for greatness?" And if it does, how do we evaluate it? These are the two main questions I will focus on and attempt to answer. From my reading of McCloskey, I firmly believe that his study, although undoubtedly multifaceted, was at least partially intended to be pedagogical. Above all he was concerned with pol! itical and social stability and he felt that the Court oug! ht to be a "vital actor in the epic of American constitutionalism" (McCloskey, 1994, pp. 148). Yet for him, exactly what the court did was less important than how they did it. His concern was for the Court to be a successful and independent part of government and much of his work can therefore be understood as a set of guidelines by which the Supreme Court can effectively play its role. For the most part, his interpretation of the Court's history served as the source for his "blueprint to greatness." For McCloskey then, a completely natural corollary of heeding historical lessons was a Court whose decisions have "maximum impact." Yet it seems that professor McCloskey's "historical guidelines" tend to support a theory of Constitutional interpretation that many conservative and liberal purists would be quite unwilling to embrace. He appears (unknowingly?) to have fashioned a rather odd ethical theory whereby all judicial decisions are eval
Trustpilot
Copyright © 2022 Thriftbooks.com Terms of Use | Privacy Policy | Do Not Sell My Personal Information | Cookie Preferences | Accessibility Statement
ThriftBooks® and the ThriftBooks® logo are registered trademarks of Thrift Books Global, LLC