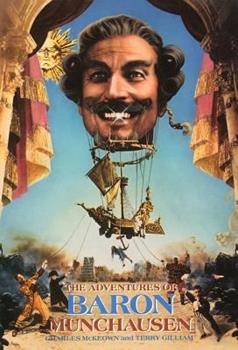 The Adventures of Baron Munchausen: The Illustrated Screenplay

by Terry Gilliam and Charles McKeown

The complete screenplay and credits with dozens of photos from the 1998 film. "A carnival! A wonderland! A weekend with nine Friday nights! Terry Gilliam's lavish dreams are beyond those of mere mortals." - Harlan Ellison

Almost as Good As Seeing the Movie (but no cigar)

Published by Thriftbooks.com User , 23 years ago
The script to one of the classic films of the 20th century. It's facinating to see the large and minute permiatations as a script is transformed into a living, breathing movie. Only by reading the script can you get a sense of some of the chunks that had to be left out due to budget constraints.

Published by Thriftbooks.com User , 24 years ago
I haven't read the screenplay, but it must be just as good as the movie, one of my favorite films of all time! It's a rousing fantasy/ adventure story of a group of superpowered people going on a qeust around the universe to stop a war. Exciting enough for kids, and intriguing enough for adults! See it for your own sake!
Trustpilot
Copyright © 2022 Thriftbooks.com Terms of Use | Privacy Policy | Do Not Sell My Personal Information | Accessibility Statement
ThriftBooks® and the ThriftBooks® logo are registered trademarks of Thrift Books Global, LLC