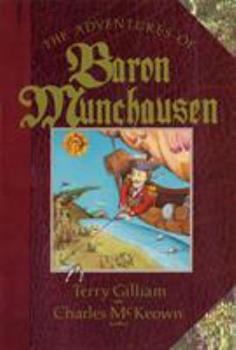 The Adventures of Baron Munchausen: The Illustrated Novel

by Terry Gilliam and Charles McKeown

Adventures written by Rudolph Erich Raspe in 1785 became an instant best-seller and was hailed as a comic sensation in the satirical spirit of Gulliver's Travels and Tom Jones . Terry Gilliam has now resurrected the Baron and his comrades in entirely new adventures.

Published by Thriftbooks.com User , 21 years ago
"The Adventures of Baron Munchausen" has always been, in my opinion, one of Terry Gilliam's best movies. Usually known for his dark fantasy for adults, here Gilliam made a light-hearted fantasy for children, which truly is endearing. Now, Gilliam, with the help of Charles McKeown, has turned the film into a novel. One thing I liked best about the film is that it was visually beautiful. Obviously, that is missing from the book. But still, the book is written with humor and intelligence, which makes it a good read, even if you've never seen the film. It can be read both by children (who will like the adventure), and by adults (who will respect the wit). Overall, this is a warmhearted tribute to fantasy, and is recommended whether or not you've seen the film.
Trustpilot
Copyright © 2022 Thriftbooks.com Terms of Use | Privacy Policy | Do Not Sell My Personal Information | Accessibility Statement
ThriftBooks® and the ThriftBooks® logo are registered trademarks of Thrift Books Global, LLC