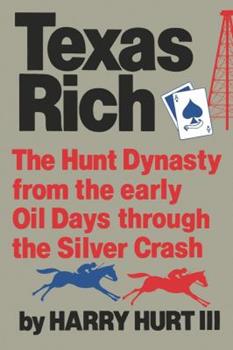 Texas Rich: The Hunt Dynasty, from the Early Oil Days Through the Silver Crash

This book is the true story of H. L. Hunt and family. It is not an authorized biography. However, in the course of researching the book and the Texas Monthly and Playboy articles which preceded it, the author was able to interview members of all three branches of the Hunt clan, among them Nelson Bunker Hunt, William Herbert Hunt, Mrs. H. L. (Ruth) Hunt, Ray Hunt, and Hugh S. Hunt. Hurt also conducted over 250 interviews with relatives, friends, associates,...

Published by Thriftbooks.com User , 13 years ago
Excellent book detailing this patriach and his offspring. If you are interested in the history of the great Texas oil boom and one of its greatest characters you need to read this book. You will understand Bunker Hunts' great comment " a billion dollars just isn't worth what it use to be".

Published by Thriftbooks.com User , 16 years ago
This is an interesting book on a fascinating family. H.L. Hunt was truly one of a kind. At on time he was the richest man in the world and amazingly had three seperate families. His life and that of his children is a case study in Texas Oil Wealth. The Hunts are to Dallas, what the Rockefellers are to New York or the Cabots are to Boston, their name alone means wealth in Dallas. It a shame that all of their money did not create a university or endow a great medical facility, instead they created posh hotels like The Crescent and The Mansion or redevelopment projects like Reunion, all of these ventures where for profit and though they helped retain Dallas' posh image, they really did not effect the average Dallasite. The first family brothers trying to corner the silver market was the height of huburis and they paid a steep price for their arrogance. Ray Hunt of the second family has definitly done the best of the children, he had much less money to work with, but he did the best with what he had and he is worth billions and is the wealthiest of the Hunts, he would have made the old man proud.

Excellent History Of The Hunt Dynsaty!

Published by Thriftbooks.com User , 18 years ago
This is a good history of H.L. Hunt as well as some of his children.Hunt turned a wildcat oil venture into a fortune of several billion dollars.His oil company eventually became Placid Oil.His early days in the oil patch up until the present are given excellent coverage.You are also able to read about some of his sons who also did well.Lamar was the owner of the Dallas Texans who became the Kansas City Cheifs.Nelson Bunker Hunt attempted to corner the silver market that eventually crashed.His daughter Carolyn became a hotel tycoon.You are also able to read about his son from the other family Ray who also became a business leader in Dallas.This is a very good book that you will enjoy reading.
Trustpilot
Copyright © 2022 Thriftbooks.com Terms of Use | Privacy Policy | Do Not Sell My Personal Information | Cookie Preferences | Accessibility Statement
ThriftBooks® and the ThriftBooks® logo are registered trademarks of Thrift Books Global, LLC