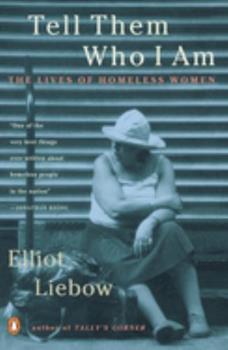 Tell Them Who I Am: The Lives of Homeless Women

"One of the very best things ever written about homeless people in the nation."--Jonathan Kozol.

You don't know what it is like to be homeless

Published by Thriftbooks.com User , 13 years ago
Tell them who I am was a great read. what better way to share the stories of homeless women than to be right there with them day to day as they face each struggle and try to dig themselves out of the situation they are in. Unless you have been there, you don't really understand. Elliot Liebow does a great job in connecting with each woman and sharing her story, how she feels and the tough choices she must make each day that people who are not homeless, are oblivious to. To gain a better understanding of how some women live, and how you can help people, read this book. It will touch your heart and your soul.

a good balance of rational and personal

Published by Thriftbooks.com User , 15 years ago
I have been reading and researching the United States homeless issues for a few months and found this book to be fairly insightful. Liebow writes from a very intimate point of view and backs up his observations with sources and facts. This is a very palatable introductory book to the general issues of homelessness in America today.

In a World of McMansions

Published by Thriftbooks.com User , 15 years ago
In a world of McMansions, there is homelessness. Liebow is a participant-observer. He had written TALLY'S CORNER at an earlier point. Elliot Liebow tries to make the relationships with the women symmetrical. In his study he ignores mental illness since he is an anthropologist. Three night shelters and a day shelter are portrayed. The names of persons and places are changed. Women come into homelessness because they are poor and powerless. Hard living is the norm. Street living creates problems of bathing, washing, eating, and sleeping sufficiently and safely. There is perennial fatigue and boredom. Protection of belongings and lack of storage creates bag ladies. Health suffers. Treatment of choice is unavailable. Some women are too sick, old, or crazy to work. Others value work over walking all day. Looking for work is a way of holding onto humanity. Shelters replace broken families. Mentally disabled residents have difficulty with their own relatives over money and power. Some residents hit the streets when they fear violence will erupt. Shelter providers fear violent behavior and keep records. Black-listing is common. The women suffer from losses of privacy and dignity. They prefer a shelter Liebow calls The Refuge where few questions are asked. Providers of services to the unsheltered fear creating dependency. History shows that after the Great Depression, the opportunities presented by World War Two emptied out the skid rows. Religious belief is a topic of shelter talk. Women see themselves as equal before God. Belief can invest homelessness with meaning. The women talk about jobs, not careers. Elementary security is a paramount concern. The women are prevented from planning through their sense of powerlessness. They live one day at a time as a coping strategy. Homelessness is rooted in poverty. Unemployment, underemployment, and substandard wages are causes. Really, now, does a market system require human sacrifice?

Tell Them Who I Am

Published by Thriftbooks.com User , 22 years ago
With his book, Tell Them Who I Am: The Lives of Homeless Women, Elliot Liebow has done an excellent job of putting the facts of shelter life together. His research was not done in a far away library with his nose in a book, rather he learned first hand by working in women's shelters and soup kitchens in Washington DC. In his book, he explores the multitude of ways that "the humanity of the women is under constant threat" and gives the reader an in-depth and intensely personal view into the different facets of the lives of homeless women. Liebow continues throughout the book to deliver the facts to the reader in such a way that they reveal the brutal truth of the women's lives without dragging the reader to a place where (s)he is overcome with pity and shame. Instead, Liebow manages to connect the reader to the women, showing their humanity. I wanted to cheer them on, encourage them, defend each of them, from opinionated Betty to retarded Ginger to Grace, a born-again Christian, although these aren't the actual names of the women. This book makes a the reader see homeless women as people and forces the reader to look beyond stereotypes. It gives the women faces and shows their individuality. Tell Them Who I Am also goes into some detail about the different shelters themselves, the ways they are run, and what function they serve. It also mentions such things as Social Services and Medicare, pointing out what they provide and, very importantly, the weaknesses that these services and others have when dealing with the homeless. These weaknesses are evidenced through the multitude of difficulties that the women experienced in dealing with various "helpful" agencies. Probably the most important reason for a person to read Tell Them Who I Am is that one can learn from it. The facts contained within this very well-written book are the facts that could go a long way toward a better understanding of homeless women and what can be done to aid them. The fear that "in all its forms stands out," can be worn away with some of the understanding can be found in this book.

Liebow brings humanness to the lives of the homeless.

Published by Thriftbooks.com User , 25 years ago
Tell Them Who I Am is a tale about several homeless women and one non-homeless man. For all its merits as an ethnography of women's shelters, which are many, one of the most endearing things about this book is its author. In 1984 Elliot Liebow found out he had terminal cancer. He promptly quit his job at the National Institute of Mental Health and headed for the soup kitchens and shelters of a small city outside of Washington, D.C. Taking notes "out of habit" he gradually compiled his thoughts (and those of his informants) as he got to know the women of these shelters. His participant-observation approach led him to be very involved as an actor in the lives of the women he met, and they too became involved in the writing of their stories. The result is a fascinating book which details the trials of homelessness alongside the joys and sorrows of being human
Trustpilot
Copyright © 2022 Thriftbooks.com Terms of Use | Privacy Policy | Do Not Sell My Personal Information | Accessibility Statement
ThriftBooks® and the ThriftBooks® logo are registered trademarks of Thrift Books Global, LLC