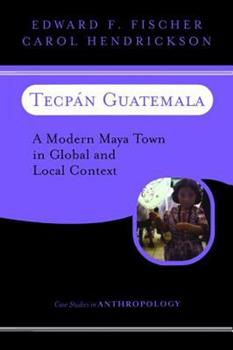 This book discusses the indigenous people of Tecpan Guatemala, a predominantly Kaqchikel Maya town in the Guatemalan highlands. It seeks to build on the traditional strengths of ethnography while rejecting overly romantic and isolationist tendencies in the genre.

Published by Thriftbooks.com User , 13 years ago
I found this book to be very insightful into understanding the historic and social context of Tecpan. I was going to be visiting the town and wanted to learn more about it. Tecpan is a relatively unimpressive town on the surface, but this book helps you see all the currents and change happening under the surface. I found it fascinating to personally seek out examples of the changing culture that the author writes about. Highly recommended.

Published by Thriftbooks.com User , 16 years ago
Professor Fischer of Vanderbilt University and Carol Hendrickson of Marlboro College have combined their several but separate and different participant observations of the Maya in Guatemala to produce this ethnographic case study of Tecpan, a Guatemalan highland town in the region of Chimal Tenango situated about 30 miles northwest of Guatemala City. Much of Fischer's contributions are based on his graduate studies during the 1990s under the auspices of Tulane University's Kaqchikel Language and Culture School, especially from 1993-94 when he and his future wife Mareike Sattler "lived and worked in Tecpan, based in a two-room former Mennonite school house". Hendrickson's ethnographic researches go back to the 1970s, when "Guatemalan civil war was entering its most intense stage. She also lived and studied in Tecpan from 1980-81. Both authors have returned numerous times since then to stay current in their observations of the activities of the Tecpanecos. The global context of the author's case study is U.S. foreign policy that supports rightwing dictatorships in Central American countries that pretend towards legitimacy via fraudulent elections, while open destablising democratically-elected governments such as the Arbenz government in Guatemala in 1954. Because the Catholic Church is pro-democracy, Catholics are often targets of rightwing violence. U.S. intervention in Guatemala is a constant problem, just as it is in the neigbouring countries of Nicaragua, El Salvador, Grenada, Panama, Costa Rica, and Honduras - or the rest of the world for that matter. For example, during Hendrickson's ethnographic studies of the late '70s and early '80s, Guatemala was ruled by CIA-installed dictators - General Romeo Lucas Garcia (who ruled from '78-'81) and his successor General Efrain Rios Montt. These CIA-installed dictators killed tens of thousands of indegenous Mayans at the behest of their bosses in Washington, District of Criminals. Tecpan did not escape U.S.-generated violence: a Catholic priest was murdered, the town hall bombed, and more than 20 clandestine graves were later uncovered. As a result of past and continuing U.S. intervention, Guatemala is a society of poor people ruled by a U.S.-backed wealthy elite - 2% of the landowners own 70% of the land (and that's the land best suited to agriculture). Fischer and Hendrickson show that this inequality has an ethnic component - none of the U.S.-backed wealthy elite are indigenous people. The first several chapters of this ethnography provide the reader with an historical context: chapter 1 provides a general introduction to Tecpan; chapter 2 provides the socio-political history of Tecpan, including U.S.-sponsored violence; chapter 3 provides some history of the indigenous Mayan and of the Kaqchikeles who live in Tecpan; chapter 4 discusses the effects of the devastating 1976 earthquake and the subsequent civil war. It is from these chapters, that the reader learns of the murder of Bi
Trustpilot
Copyright © 2022 Thriftbooks.com Terms of Use | Privacy Policy | Do Not Sell or Share My Personal Information | Accessibility Statement
ThriftBooks® and the ThriftBooks® logo are registered trademarks of Thrift Books Global, LLC