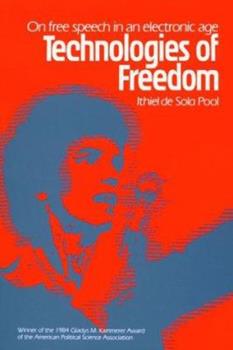 How can we preserve free speech in an electronic age? In a masterly synthesis of history, law, and technology, Ithiel de Sola Pool analyzes the confrontation between the regulators of the new communications technology and the First Amendment.

Published by Thriftbooks.com User , 14 years ago
This technological tour de force is simply breathtaking in its polemical power and predictive capabilities. Reading this book more than 20 years after it was published, one comes to believe that Pool must have possessed a crystal ball or had a Nostradamus-like ability to foresee the future. For example, long before anyone else had envisioned what we now refer to as "cyberspace," Pool was describing it in this book. "Networked computers will be the printing presses of the twenty-first century," he argued in his remarkably prescient chapter on electronic publishing. "Soon most published information will disseminated electronically." Few probably believed him in 1983, but no one doubts him now. Meanwhile, he did all this while also providing a passionate defense of technological freedom and freedom of speech in the electronic age. If you care about those things, read this book. It is a masterpiece. [...]
Trustpilot
Copyright © 2022 Thriftbooks.com Terms of Use | Privacy Policy | Do Not Sell My Personal Information | Cookie Preferences | Accessibility Statement
ThriftBooks® and the ThriftBooks® logo are registered trademarks of Thrift Books Global, LLC