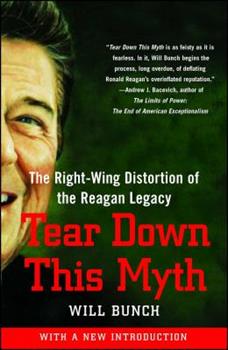 Tear Down This Myth: The Right-Wing Distortion of the Reagan Legacy

In this provocative new book, award-winning political journalist Will Bunch unravels the story of how a right-wing cabal hijacked the mixed legacy of Ronald Reagan, a personally popular but hugely divisive 1980s president, and turned him into a bronze icon to revive their fading ideology. They succeeded to the point where all the GOP candidates for president in 2008 scurried to claim his mantle, no matter how preposterous the fit. With clear eyes...

A Good Job of Describing Both the Man and the Myth

Published by Thriftbooks.com User , 12 years ago
I was a young adult during the Reagan presidency and let's just say I was not a fan. For that reason, I wasn't all that sure I wanted to read this book -- I felt I pretty much "got it" about Reagan, and having lived through the era, could separate myth from reality on my own. I was wrong. This is a fascinating book, whether you remember Reagan as a fan or a foe, or whether you are younger and know him primarily through the legend of conservative purity and wisdom that has grown up around his memory. Mr. Bunch reminded me of some of the things I disliked about Reagan, but he also reminded me of some things I liked. And I found out about a few things I'd missed at the time and would have liked had I known about them. He also does us a great service by examining how different Reagan the man was from Reagan the myth. In myth: uncompromising. In reality: a pragmatist who would cut a deal to get things done. In myth: the warlike figure who scared the hell out of the Soviets. In reality: a person haunted by the idea of nuclear war and dedicated to arms control and negotiation. In myth: the ferocious tax cutter. In reality: raised taxes every year in office except the first. And so on... I don't think this book will change your mind about Reagan, exactly. But it will educate you about Reagan, whether you worship him, detest him, or aren't sure. Given how long a shadow the myth of Reagan has cast, essential reading for anyone interested in American politics.

Published by Thriftbooks.com User , 12 years ago
I am a Republican that has been in denial until I read this book. This book is long overdue and, with no doubt, it will be bashed by denying and doting Reaganites who refuse to acknowledge and address the undisputable contents of this defining book on the truth of the Reagan years. I'm so glad that the myth has been exposed.

Published by Thriftbooks.com User , 13 years ago
I first ran into the Reagan mythmaking machine when a family member gushed a few years back about how Ronald Reagan won the Cold War. Shocking as this statement was to me, I managed to sputter something about how many presidents -- Democrat and Republican -- had contributed to the win, and that Reagan just happened to be there at the end. But I was always unsettled by the claim. Now, Will Bunch provides a reminiscence of the story of Reagan's presidency -- both the good and the bad. Bunch reminds us that Reagan was not particularly popular during most of his presidency, and that many Americans had good reason to wonder whether the country was in competent hands. Bunch runs over the Iran-Contra scandal, which came close to ending up in Reagan's impeachment. Far from being a thrifty government downsizer, he added $2 trillion to the national debt and grew the government. Bunch also reminds us that Reagan was the original "cut and run" artist, pulling US troops out of a failed mission in Lebanon within weeks after 241 Marines were killed there in a terrorist attack. We are reminded that Reagan's overtures to Iran to free hostages only resulted in more Americans being taken, and that his economic plans sowed the seeds of deregulation and greed that we are still reaping. We also see Reagan, the man who hated committing troops to war, who was a pragmatist economist who raised taxes when his trickle down theories did not working and whose personal diplomacy with the Soviets came close to riding the world of nuclear weapons. The second half of the book lays out the players involved in turning Reagan into a poster child for ideas that he did not espouse. Grover Norquist and others are shown twisting Reagan into a champion of constant tax cuts, removal of long-time fiscal regulations and intervener in foreign affairs. George W. Bush eagerly wore his mantle. And even Barack Obama is unable to escape his shadow. Apart from laying out the facts, Bunch writes well and engagingly. And he is fair. I personally have long thought that the invasion of tiny Grenada, coming close on the heels of the Marine barracks disaster, was meant to distract the public from Reagan's ineptitude. Bunch disagrees, pointing out (not completely convincingly) that the invasion had been in the planning for some time. Bunch argues persuasively that Reagan's popularity grew at the end of his presidency only when he had been so weakened by his own blunders that he had to move to the center. And he was fortunate in becoming an Alzheimer's victim, gaining popular sympathy as he left the public stage. "Tear Down this Myth" is a must read for liberals as well as conservatives -- anyone, really, interested in basing the politics in reality rather than in myths and wishful thinking. With luck, the political climate may finally be right or this kind of accurate accounting.

The Best Account of the Reagan presidency and myth

Published by Thriftbooks.com User , 13 years ago
It has taken a journalist Will Bunch to have written the most objective account of the Reagan presidency. According to Bunch, Ronald Reagan was great at creating an easy storyline that the public could follow as seen in his "tear down the wall," speech and his visit to Normandy in 1984. However his domestic policies were a flop such as tax cuts to the very wealthy that did nothing to improve the American economy in the early years of his presidency. Reagan's foreign policy was not that successful either because the arms build up in the first four years of the eighties actually strenghthened the hands of the Soviet hardliners. While in Latin America and the Middle East, Reagan allowed the problems in these regions to fester and his advisors broke laws with the Iran-Contra scandal. Reagan only improved his standing with the public when he took pragmatic steps such as talking with Gorbachev and eventually raising taxes sixteen times during his two terms. When Reagan exited in 1988, journalists and politicians were relunctant to question him about Iran-Contra because they were afraid of another failed presidency. After Reagan left office, he was rated on a low-average rating by journalists and historians but this perception started to change in 2000. Grover Norquist started the Reagan Legacy Project which made started a campaign to name highways,buildings,an airport, and a aircraft carrier after the former president. When Reagan died in 2004 most of the mainstream journalists took the the myth to heart and did not question some troubling legacies of the fortieth president. This distorted legacy was used by Bush 43 in his insistence on staying in Iraq even though Reagan opposed using military force in combating terrorists and pulled out of Lebanon after a suicide bomber killed 241 marines.Bunch concludes his book by stating that Reagan's greatest failure was rolling back Carter's energy conservation polices that ultimately made the US behind the rest of the industialized world when it comes to the development of alternative energy. The only aspect of the book that Bunch leaves out is how some academics like John Gaddis, Douglas Brinkley, and John Patrick Diggins contributed to the Reagan myth by legitimizing right wing talking points against the actual facts. Despite this minor weakness, Bunch has written the best work about Ronald Reagan and his legacy.
Trustpilot
Copyright © 2022 Thriftbooks.com Terms of Use | Privacy Policy | Do Not Sell My Personal Information | Accessibility Statement
ThriftBooks® and the ThriftBooks® logo are registered trademarks of Thrift Books Global, LLC