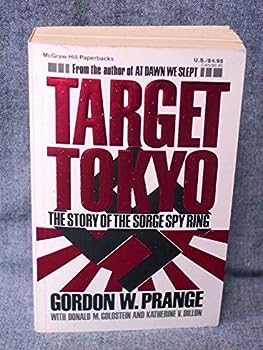 Target Tokyo: The Story of the Sorge Spy Ring

This description may be from another edition of this product. From deep within imperial Japan, a Soviet agent smuggled out intelligence that helped the Allies win the war Richard Sorge was dispatched to Tokyo in 1933 to serve the spymasters of Moscow. For eight...

A look at a little known aspect of the war

Published by Thriftbooks.com User , 13 years ago
This book covers in great detail an important, if largely ignored, part of World War II. If you are interested in reading about real spies and how they worked and how they existed I would definitely recommend "Target Tokyo".

Published by Thriftbooks.com User , 19 years ago
Model research work (61 reference pages) on the ploys of Stalin's master spy Richard Sorge.Sorge penetrated the highest power circle in Japan and had excellent connections with the Nazi-party through the German Embassy in Tokyo.Prange proves that Sorge informed Stalin about the German attack against the Soviet-Union (operation Barbarossa) and that Stalin didn't believe him. That Sorge pinpointed the Pearl Harbor attack is for the author a myth.Sorge got caught by the Japanese when his spy work became careless. He hoped that Moscow would save him through an exchange of prisoners, but his friends let him fall as a burnt spy. He was hanged. Only twenty years later Moscow admitted that he was an agent of the Comintern.Excellent portrait of Sorge: a desperate soldier of WWI, who saw in communism the salvation of humanity, but also a hard drinker and a compulsive womanizer. The definitie book on Sorge. I agree with one of the rewiewers that this work is essential historical reading about WWII.

Why is this book out of print???

Published by Thriftbooks.com User , 20 years ago
This is an excellent account of the Sorge spy ring that operated in Tokyo prior to and during WW II. Richard Sorge was an NKVD agent (predecessor to the KGB) who was sent to find out if Japan was going to attack the USSR.His mission was a first rate success. He was able to tell Stalin that the Japanese militarists were going to attack to the south, against the East Indies, Philippines, and Australia. They would not attack Russia unless three things happened: the Germans captured Moscow, civil order broke down inside the USSR, and the Japanese Army had a significant force superiority along the Mongolian boder.As a result of that information, Stalin pulled army divisions out of Siberia, and was able to use them for the counterattack outside Moscow in the Winter of 1941-2. That one piece of information could well have been the key to Hitler's defeat because if Moscow had fallen, the Germans probably would also have taken Stalingrad, and then captured the oil of the Middle East. Remember, the Luftwaffe didn't run out of airplanes; they ran out of fuel.This book is an essential item for any historian of WW II.

Published by Thriftbooks.com User , 23 years ago
Richard Sorge was a spy--pure and simple. I'm not denying that. He worked for Stalin. In the 1930s, Stalin sent him to Tokyo where he became a mole in the German Embassy in Tokyo. The Japanese were onto him from the beginning. It wasn't until he got sloppy that the Tokko, the Japanese secret police arrested him. He was executed in 1944. Near the end, Sorge's spy ring warned Stalin about Hitler's plan to invade the Soviet Union but Stalin refused to listen.
Copyright © 2020 Thriftbooks.com Terms of Use | Privacy Policy | Do Not Sell My Personal Information | Accessibility Statement
ThriftBooks® and the ThriftBooks® logo are registered trademarks of Thrift Books Global, LLC