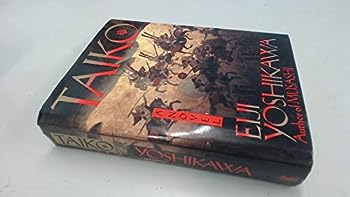 Taiko: An Epic Novel of War and Glory in Feudal Japan

This description may be from another edition of this product. In the tempestuous closing decades of the sixteenth century, the Empire of Japan writhes in chaos as the shogunate crumbles and rival warlords battle for supremacy. Warrior monks in their armed...

A mountain worth climbing

Published by Thriftbooks.com User , 14 years ago
Eiji Yoshikawa spins an awesome tale of the three great warlords of medieval Japan. Each is portrayed in a vivid character study as they seek to unite the warring clans into a nation. For those with a love of Japanese history who wish to climb to the literary mountaintop of a 900+ page epic--look no further. While his novel "Musashi" may be the more famous to Western audiences, I would put "Taiko" as my first recommendation. After reading it you'll feel like you know the hearts of Nobunaga, Hideyoshi and Ieyasu.

It was too hard to put this book down!

Published by Thriftbooks.com User , 17 years ago
I loved it. I didn't think I would like it but my husband(who is a great fan of Japanese lit) always picked it up at every opportunity. I started to read it and I couldn't stop. Not really a good thing with a book with 900+ pages! The language the author used was wonderful. The translater did a wonderful job of keeping the spirit and intent of Yoshikawa intact. Reading this, I felt like I was right there with Hideyoshi as he met and then fought beside Nobunaga. My only disapointment was when the book ended. Like so many works from Japan, it seemed to just stop, leaving me hungary for more. Yoshikawa indeed did an excellent job of making a sometimes dry subject become completely alive. I originally purchased this for my husband for Christmas. I read it and it is one present I know he enjoyed over and over, every time he turned the page. If you are or know someone who likes to read about history or Japan, buy this book!

The Age of War

Published by Thriftbooks.com User , 19 years ago
In the middle of the sixteenth century, Japan is sunk again in the turmoil of civil war, as the weak Ashikaga Shogunate is no longer able to keep the order. The most powerful clans are willing to take control over the country, reach the capital, Kyoto, and thus gain the favour of the Emperor: the Imagawa of Suruga, the Takeda of Kai, the Uesugi of Echigo and the Hojo of the Kanto.Within this turbulent period, "Taiko" narrates the life of Toyotomi Hideyoshi, "Monkey", as he was called since he was a child; the man who, born in poverty in an ashigaru's family, would become the most powerful man in Japan, accomplishing the dream of unification of his master, Oda Nobunaga, lord of Owari and head of the Oda Clan. Together with Tokugawa Ieyasu, lord of Mikawa, they will complete step by step the process of unification which is only to end with the appointment of Tokugawa Ieyasu as Shogun by the Emperor in 1603 and the restoration of the Shogunate administration, the Bakufu."Taiko" is mainly a succession of epic feats, battles and military campaigns described indeed with the vividness of a Kurosawa film, but it is also a rich depiction of samurai's way of life, the Bushido, their sense of honour, their households, etiquette and ceremony, like the tea ceremony or the ritual suicide (seppuku).This process of unification begins with the astounding defeat of Imagawa Yoshimoto on his way towards Kyoto by Oda Nobunaga in the battle of Okehazama (1560), to continue with the expansion of the Oda Clan through Central Japan, the defeat of the Saito and subsequent conquest of Mino; the defeat of the Asai of Omi and Asakura of Echizen in the battle of Anegawa (1570); the crush of the warrior monks and the destruction of its holy sanctuary of Mount Hiei; the beginning of the end of the House of Takeda after the battle of Nagashino (1575), until the campaign that Hideyoshi commanded against the powerful Mori Clan of the Western provinces in the early 1580s.Hideyoshi died in 1598, two years before the famous battle of Sekigahara, upon which, his former ally, Tokugawa Ieyasu, won the Shogunate. However, already in 1585 Hideyoshy had been appointed Kampaku (Regent) by the Emperor, and Dajo-daijin (Chancellor) a year after. The appellation of Taiko is that used by a Regent on retiring from office."Taiko" is the very best novel of Japan's Sengoku, absorbing in its reading as if one was actually living in those feudal times.

Published by Thriftbooks.com User , 20 years ago
This book is for those who have an interest in Japanese history, geopolitics, medieval strategy, and complex feudal relationships. For those fluent in asian historical and semi-historical literature, Taiko is best described as the Japanese analog of the Chinese epic Three Kingdoms. That is, it is a novelized, and in some areas, a speculative account of actual historical events.Taiko (the english translation of which is an abridged version of the Japanese original) details the struggle to unify the numerous fragmented Japanese provinces during the late 16th Century. During this time, the militarily and politically impotent Ashikaga Shogunate was powerless to stop what were basically dozens of civil (clan) wars raging across Japan.The country's many provinces were ruled by various daimyo (warlords) of competing clans. The most powerful of these clans harbored ambitions to put the whole of Japan under their banner. Among the leaders of these powerful clans were names that ring out like a who's who of Japanese history; men such as Oda Nobunaga, Tokugawa Ieyasu, Imagawa Yoshimoto, Takeda Shingen, Uesugi Kenshin, and Mori Motonari.However, these men could not unite the country on their own. They needed the help of talented retainers to lead their troops into battle, to formulate their grand strategy, and to administer their lands. Among the most talented of these retainers was also the man with the most humble of origins: Toyotomi Hideyoshi.Hideyoshi (given name) started off life as a poor peasant, ridiculed by the moniker "Monkey" by almost all who knew him. As a youth he worked several odd and menial jobs, but his dream was to be a samurai under the employ of a great lord. His opportunity came during a chance encounter with Oda Nobunaga, the daimyo of Owari, who hired him out of admiration for his audacity in directly asking for employment. Hideyoshi then rose in the ranks of the Oda clan from stable boy to kitchen hand to sandle bearer to retainer.Through the years Hideyoshi earned Nobunaga's trust and rewards by displaying talent on and off the battlefield. By the time of Nobunaga's death (due to the treachery of Akechi Mitsuhide), Hideyoshi was one of the most powerful men in the Oda clan (if not the whole of Japan). He protected his late lord's heir, and continued Nobunaga's legacy by completing the unification of Japan, ultimately being awarded the title of Taiko (one absolute ruler of the nation).To completely understand this book you must be prepared for the preponderance of Japanese names and places. Fortunately, each section has the leading players and locations briefly explained beforehand. Just remember that familial names come first and are the most important, for a samurai's family and clan defined his loyalty and being.Overall, a great read.If you are interested in other books based on Japanese feudal history try this list (which I have in chronological order): Tale of the Heike (rise and fall of the Taira clan during the

Japan's "Gone With the Wind" so to speak.

Published by Thriftbooks.com User , 20 years ago
Eiji Yoshikawa's epic historical novel "Taiko" tells the story of Toyotomi "Monkey" Hideyoshi; a man born from adversary destined to become one of the most influencial figures in the unification of Japan during the Wars of the Daimyos, along with his daimyo Oda Nobunaga and his ally Tokugawa Ieyasu (later to become the founder of the last Shogunate Dynasty). The book's colorful detail of a simple child born into poverty with the determination of becoming a samurai takes a bold step in retelling the classic 'rags to riches' story. His Lord, Oda Nobunaga appears to be a rash and brute individual, the complete opposite of Hideyoshi. However; this daimyo sees the genius that Hideyoshi displays and helps him to rise through the social levels, from foot soldier to the heir of Nobunaga's mission to unify Japan. This novel has something for everyone: romance, culture, drama, the pain of fighting allies, the bonds of friendship, honor, duty, and the very essence that defines the cultural example of Japanese ideology. Read "Taiko" and discover the lives of Japan's three unifying leaders and their journey to "make the bird sing." This book is worth every penny and deserves to be on every japanese historian's shelf, amateur or professional.
Copyright © 2020 Thriftbooks.com Terms of Use | Privacy Policy | Do Not Sell My Personal Information | Accessibility Statement
ThriftBooks® and the ThriftBooks® logo are registered trademarks of Thrift Books Global, LLC