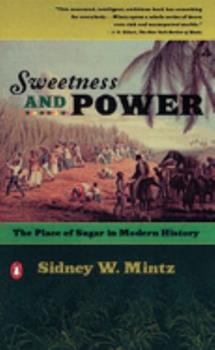 Sweetness and Power: The Place of Sugar in Modern History

A fascinating persuasive history of how sugar has shaped the world, from European colonies to our modern diets In this eye-opening study, Sidney Mintz shows how Europeans and Americans transformed sugar from a rare foreign luxury to a commonplace necessity of modern life, and how it changed the history of capitalism and industry. He discusses the production and consumption of sugar, and reveals how closely interwoven are sugar's origins as a "slave"...

Published by Thriftbooks.com User , 13 years ago
Quick Summary: Unlike many anthropologists out there, Sydney Mintz' style is quite accessible for the casual reader. In this particular book he takes us through the genealogy of sugar and begins to dissect that refined white stuff we put in our coffees and teas for what it originally was--a medicine or spice. He then walks us through shifts in the "meanings" of sugar as we began to develop a whole economy (around this very substance) and this economy, still exists today in the system we call "capitalism". In so doing this we learn of triangles of trade, the rising proletariat in England and, their mirror image, slaves in the Caribbean, the British 'sweet tooth' and much more. Little Review: This 86-year old anthropologist who still works as a research professor at John Hopkins University tells a wonderful story that anyone who can read should read. It will make you want to brush your teeth. It will make you want to ease your sugar habits, but most of all, it will cause you to reconsider your views on slave labor in the Americas. Mintz, does have some theoretical things to say in this book, but for the less casual reader, you might feel as if he was lacking here. Most obvious in terms of this, was his small, but interesting discussions of power. For a nice complement to this book, I suggest seeing the film Sugar Cane Alley, which I have also reviewed. Sugar Cane Alley

Published by Thriftbooks.com User , 16 years ago
Sidney W. Mintz's Sweetness and Power situates economic analysis in consumption rather than production. The author believes that a producer's labor and exploitation is not enough to understand the exploitation of production. One must unpack the mythos of demand. Central to this is the idea that rational choice leads liberal individuals to consume products because it is in their best interest. Mintz correctly implies that in the historiography of western consumers and colonial producers, this liberal individual is almost always white, male, and couched in the trappings of "civilization." He criticizes prevailing practices in social anthropology that approach colonized peoples as pristine and discrete, a tendency that also has troubling sway over what he terms "anthropology of modern life." He sees the anthropology rooted in his study of a basic commodity-sugar-as a positive contestation of the bounded primitive as a mode of inquiry and one that connects rather than marginalizes its subjects. Mintz's engagement with cultural anthropology is based on a sophisticated premise: the way in which canonical anthropology marginalizes the primitive in opposition to civil society is related to the way in which liberal economics marginalizes the producer in opposition to the liberal individual consumer. The term "in opposition to" is appropriate because in this marginalization, both ends are mutually decentered. Both the primitive and the civil as well as production and consumption are on the margins because there is a labor, an exploitation, and an invocation to behavior that defies logic on each end. This, Mintz implies, necessitates a rejection of the prevailing colonial narrative of one-way dominion. For him, the mass-consumption of sugar is an anthropological anomaly. This is the puzzle that leads him to root his study in England from roughly 1650 thru 1900, during which time sugar went from being a lavish luxury to a staple of working class diets. As he notes, there is ample anthropological precedent to model culture and society as resistant to change and resistant to the imposition of new practice and tradition, even amidst a changing milieu that raises contradictions. Thus, contrary to liberal economic theory, demand is not a matter of nature in which rational persons severed from cultural meaning rush toward rational hedonistic consumption with open arms. Indeed, anthropology suggests that nature resists this imposition of change. Because of this, demand must be a structural phenomenon. It must at some juncture interrupt and structure culture in a way that is alien to its natural progression. The author concludes that production must create cultural meaning. Understanding demand as structure and not nature allows there to be a liminal space between production and consumption. For Mintz, sugar inscribes a genealogy of contact upon this space. He sees the global connectedness of commodity as a new shape in which to group peoples in the study of kin

Good Mix of History and Anthropology

Published by Thriftbooks.com User , 21 years ago
Sidney Mintz provides and an excellent background on the impact that sugar has made on humankind in the past 400 years. The theme of the of the books centers on sugar within the British economy and culture but provides a different insight on European colonialism and the impact of specialty items in mercantilism economies. Although the book reads as a straight history text, Mintz, as a trained anthropologist, provides a provocative case study into the intricate relationship among products, consumers and producers. The book is well documented/foot-noted. Any student of economics, anthropology or the history of Colonial/Industrial Britain should grace their bookshelf with this text.

A fascinating look at the history of sugar

Published by Thriftbooks.com User , 21 years ago
I bought this book simply out of curiousity, and it was marvelous! It really details the ways in which the sugar trade transformed and created the modern world -- I would highly recommend it to anyone who is interested in how markets act and how the history of substances we view as everyday. My one complaint is an overly long section tracing the rise in English sugar consumption, but the political and economic facts are tremendous.

Published by Thriftbooks.com User , 22 years ago
I found this book very interesting as I read it for a development anthropology class. Mintz gives a detailed and informative history of the development of sugar as a commodity from the colonial age to the present. Coming from an anthropological point of view, he examines the cultural impact of sugar production on the Carribean nations that produce it. He also displays how British organization of the industry in their colonies created an increasing demand for sugar.
Trustpilot
Copyright © 2022 Thriftbooks.com Terms of Use | Privacy Policy | Do Not Sell My Personal Information | Accessibility Statement
ThriftBooks® and the ThriftBooks® logo are registered trademarks of Thrift Books Global, LLC