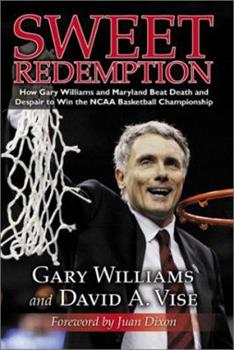 by Gary Williams and David A. Vise

Sweet Redemption is the amazing inside story of how Coach Gary Williams survived devastating defeats and overwhelming odds to build a championship basketball program at Maryland and win the 2002 NCAA... This description may be from another edition of this product.

Published by Thriftbooks.com User , 19 years ago
i rated this four out of five becouse ididn't fully grssed the intoto of your information about the issue bein discussed there from ma point of view as a reader.

For all basketball fans and Maryland fans.

Published by Thriftbooks.com User , 19 years ago
Sweet Redemption is the well-told story of how a very good and very dedicated coach and some very good and very dedicated players -- whom most other schools overlooked -- finally brought the NCAA Division I men's basketball championship to the University of Maryland. Like the movie Hoosiers, it should be of interest to all basketball fans -- indeed all sports fans. But it will be a special treasure to supporters of Maryland basketball who for years watched their generally quite good teams suffer one frustration after another. Maryland's 2002 basketball championship was indeed sweet redemption which all true sports fans should be able to savor.

Published by Thriftbooks.com User , 19 years ago
This is the story behind the 2002 University of Maryland basketball championship season and also serves as mini-biographies of Gary Williams, Juan Dixon, and the University of Maryland basketball program. Very well written and organized, it will be interesting for sports fans, even those not U. of Maryland fans. The many tragedies suffered by the institution and individuals associated with the program are heart rending and compelling. The Maryland championship season is a real life triumph over tragedy story. Regardless of where one's rooting interests lie, I dare say nobody can read Juan Dixon's story and not marvel at his perseverance and leadership. A true, shining example of heart and courage.

Published by Thriftbooks.com User , 19 years ago
For all Maryland Terps, past and present, the 2001-2002 basketball season was a magical one to follow. It marked the culmination of years of hard work and overcoming almost insurmountable odds by both coach Gary Williams and star guard Juan Dixon. "Sweet Redemption" tells the tale of the separate, yet similar, journeys these two men took, along with the Maryland basketball program, to overcome tremendous hardships and reach the summit of excellence with the 2002 NCAA National Title. Gary Williams came from a broken home to become hard driven coach and successful coach at the expense of his own marriage and estrangement from his daughter. Williams returned to his alma mater, University of Maryland, to coach the men's basketball team in 1989, just in time for all the bad blood of Len Bias' death from cocaine and subsequent recruiting violations to cripple the Terrapin program in a way that made it impossible to win (or even get fan and university support) in those first few years. Juan Dixon came from a harsher background. His parents, while bright and intelligent people, were caught in the vice grip of heroin addiction. They were in and out of prison through most of Juan's young life and he was shuttled from family member to family member to be cared for (a role that mostly fell to his older brother Phil). Though his parents finally cleaned up, the damage was done and they died from HIV-related complications brought about by using dirty heroin needles. Prior to his death, Juan's father made saw to his that his brother looked after Juan and made sure he got his education. Basketball was an escape for both Juan Dixon and Gary Williams. So, it would make sense that the two would come together and help each other achieve the highest level of success possible. "Sweet Redemption" does give some details into backgrounds of Williams and Dixon, but, at 252 pages, it is understandably superficial in its overall treatment of the subject. Additionally, the progress of the Maryland basketball program from a being nearly dismantled to winning the National Title over 13 seasons is given a perfunctory treatment. All things considered, though, this deficiency does not detract from the overall impact of the book. There is a list of sources in the back of the book that give reference to more in-depth material on which this book is based. "Sweet Redemption" is designed to be a quick study and companion piece of the championship season for fans to ready and enjoy while they get re-energized for the upcoming season.
Trustpilot
Copyright © 2022 Thriftbooks.com Terms of Use | Privacy Policy | Do Not Sell or Share My Personal Information | Accessibility Statement
ThriftBooks® and the ThriftBooks® logo are registered trademarks of Thrift Books Global, LLC