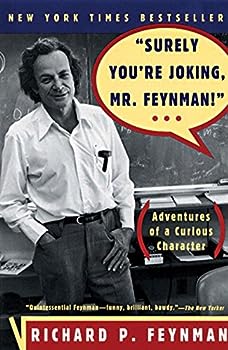 Surely You're Joking, Mr. Feynman! (Adventures of a Curious Character)

(Book #1 in the Feynman Series)

Richard P. Feynman, winner of the Nobel Prize in physics, thrived on outrageous adventures. In this lively work that "can shatter the stereotype of the stuffy scientist" (Detroit Free Press), Feynman... This description may be from another edition of this product.

read years ago and now ordering my own copy!

Published by love , 11 months ago
not a heavy science book rather a book of fun stories of his wry observations and curious mind sure to make you think about things and laugh along the way!

This has to be one of the most incredible and funniest books ever written about a genius.

Published by I Feel safe flying now! , 3 years ago
I've given many copies up this book away as this man is absolutely brilliant I've never read anything like it before it made me want to learn how to do the hypotensive and figure out pi but mostly I figure out pie, still this is one of the best books ever you will laugh and be astounded at the same time. To think these amazing and brilliant people are all around us!

Published by Thriftbooks.com User , 18 years ago
this is one of the best books ever. being in Geometry and using the pythagorean theorem, deals A LOT with numbers being squared. with the neat little trick i learned in this book, i hardly ever use my calculator if the number is around 50 or any multiple of 50. it has saved a lot of my time and i am not kidding, Mr. Feynman is a genius. WOW!!! =)

Published by Thriftbooks.com User , 21 years ago
I read Surely Your Joking for the 1st time in late 1987. My daughter got if for me at my request for my birthday. Actually I asked her for something by Phillip Morrison but while she was shopping in the San Jose State bookstore she forgot what physicist I was interested and got Feynman's book instead.I'm glad she made that innocent mistake. Feynman knocked me out. Raymond Todd's reading on the 10 CD audio set is outstanding. I'm buying my daughter a set for herself.

One of the funniest books I have ever read

Published by Thriftbooks.com User , 22 years ago
This is a great book, for both geeks AND non-geeks. It explores the exciting life of Richard Feynman, one of the greatest physicists of the century. But this book is not about physics, rather it tells you how interesting of a life a physicist can have. It has stories of how the author got girls, tricked and joked on friends with his wits, did stupid things at formal occasions, and blabbered about many parts of the government and other recognized systems. I definitely recommend this book to those thinking about a career in research science like I am. It gave me the impression that being a scientist doesn't necessarily make you stay in a white lab coat all day talking geek-talk. On the contrary, you can still have a life. It confirmed my want to pursue and education and career in research chemistry. As for non-geeks, you'll get a good laugh about the interesting character of Feynman, without needing any knowledge of math or science to read the book (though there are about 1 or 2 jokes that somewhat relate to math).

Published by Thriftbooks.com User , 22 years ago
This book is a jewel. One would be hard pressed to find a more comical and enjoyable book to read - anywhere. Feynman is the scientist who breaks (or should I say, shatters?) the stereotype of the lab-coat physicist who wears thick, taped up glasses. The great Richard P. Feynman is a testament to how great we as a race can me. I like to think of him as a cross between Goethe & Robin Williams (and I do NOT mean that in any sort of deragatory way). As a physicist, he was top notch, but as a person he was something even more. He had a marvelous sense of humor & enjoyed playing pranks on people. His love of life spilled over to all the people he met during his sojourn on the planet. I only wish that I had been one of those lucky few to have met & known him personally. Perhaps what is most remarkable about him is that he had friends from all walks of life. Many were scientists, yes, but many more were "ordinary" people off the street. That is rather noteworthy given the fact that so many Ivy league-calibre professors feel that they too "intellectually gifted" to associate with the rest of we mere mortals. Someone once said that Edwin Hubble wasn't a humble man, but then again, Hubble didn't have very much to be humble about. I would argue that one could say the latter of Feynman as well, but not the former. READ THIS BOOK and share the experiences of one of the most extraordinary and yet fun loving personages of the 20th century (if not all time). I guarantee it will make you laugh like few other books you will ever read.
Trustpilot
Copyright © 2022 Thriftbooks.com Terms of Use | Privacy Policy | Do Not Sell My Personal Information | Cookie Preferences | Accessibility Statement
ThriftBooks® and the ThriftBooks® logo are registered trademarks of Thrift Books Global, LLC