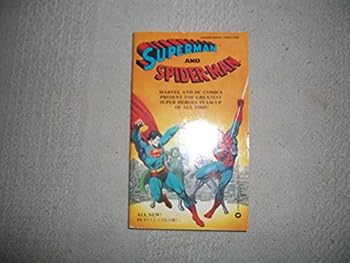 by Jim Shooter and Joe Sinnott

Dr. Doom and the Parasite combine to destroy Superman as Clark Kent and Peter Paker swap places at the Daily Planet and Daily bugle. Guest apperances by the Hulk and Wonder Woman. I have head Roy... This description may be from another edition of this product.

"Hmmph. To think that the fate of the world might depend on an improvised lint brush!"

Published by Thriftbooks.com User , 14 years ago
It took DC and Marvel seemingly forever to put their two most iconic superheroes in the same story. But, at last, the year 1976 saw the first ever teaming up of DC's Superman and Marvel Comics' Spider-Man in Superman Vs. The Amazing Spider-Man, in which the Man of Steel and ol' Webhead go up against Lex Luthor and Dr. Octopus. The one I have is jumbo-sized. Then came this one in 1981 in pocketbook form, titled SUPERMAN AND SPIDER-MAN, sub-titled "The Heroes and the Holocaust!" 160 pages of crossover heroics, and in color. In my boyhood, these two collaborations were stuff to be read and savored on many a weekend afternoon and then carefully stowed away again somewhere safe. They were all the more cherished because, back then in the '80s, any further dealings between the two comic book companies seemed unlikely as they had become embroiled in a grim, nasty corporate feud. All this is old news now, of course, as DC and Marvel have kissed and made up, having since then produced a healthy mess of collaborative efforts. Nowadays, an announcement of a DC/Marvel product is greeted in a more cavalier fashion by the fans. But back to SUPERMAN AND SPIDER-MAN. Jim Shooter, back in the days, was one of the most prolific writers in the comic book biz. He takes up the writing duties here and comes up with an intricately plotted story which pits our heroes against Dr. Doom and the Parasite and Doom's latest diabolical, world-conquering scheme, Project Omega. The plot involves Peter Parker getting a temp gig at the Planet and hitting on (and getting shot down by) Lana Lang, while Clark Kent runs circles around the ever pushy J. Jonah Jameson. Along the way, we have a brief but monumental face-off between Supes and the Hulk and, later, a game of keep away between Spidey and Wonder Woman. Shooter does justice to both Supes and Spidey and their respective mythos, nicely working out what would've been their relationship if they'd been all along in the same continuity. Basically, Spidey looks up to the Kryptonian and is properly awed. Meanwhile, Superman gives him props as a fellow crimefighter. It's just funny to me that Superman continues to be respected everywhere he ventures, whereas Spidey just keeps getting shot at by the cops, even in squeaky clean Metropolis. I'm a real big fan of the wisecracking Spidey, so I really enjoyed Shooter's touches with regards to the webhead. As usual, sad sack Peter has been having a depressing rash of bad luck, to the point where even his superhero alter ego has begun to doubt himself, especially in the overwhelming presence of Superman. There was actually a point in the story where Spidey was about to chuck it all and let Superman save the day by himself. But, when the chips are down, Spidey yet again demonstrates why he's everyone's favorite underdog hero. Superman, he's a little bit too self-assured and all-powerful for my taste. It's a treat to see how Spidey's supporting cast interacts and reacts to Clark Kent and Supes

Published by Thriftbooks.com User , 20 years ago
This is actually a paperback book that is a reprint of marvel treasury #28 but it does well in this size format because most panels are large and fill up entire pages. The book is 160 pages long. When Doctor Doom and the Parasite join forces Superman and Spiderman must team up. Because Peter is a photographer and Clark is a journalist they sort of switch places for this crossover. To give you a taste of how dated this book/trade is, when Peter (Spiderman's alter ego for the comic book impaired out there) meets Lana Lang his thoughts read, "Holy Toledo! She's gorgeous! Suddenly my fillings ache!" Statements like that make for some good laughs. By Jim Shooter, John Buscema and Joe Sinnot -- watch for an early appearance by none other than everyone's favorite: The Hulk.
Trustpilot
Copyright © 2022 Thriftbooks.com Terms of Use | Privacy Policy | Do Not Sell My Personal Information | Accessibility Statement
ThriftBooks® and the ThriftBooks® logo are registered trademarks of Thrift Books Global, LLC