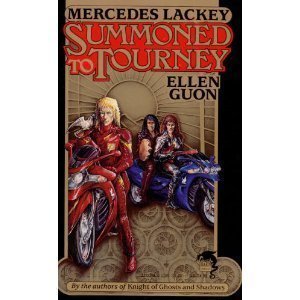 (Book #2 in the Bedlam Bard Series)

by Ellen Guon and Mercedes Lackey

Elves in L.A.? When things get too hot there, they move north to San Francisco. But in their futuristic world, San Francisco is doomed to drop into the ocean The only hope lies with the... This description may be from another edition of this product.

Published by Thriftbooks.com User , 14 years ago
Summoned to Tourney is the follow-up to Knight of Ghosts and Shadows. Eric, Beth and Kory are now a threesome (in every sense) and are on the run from the "Feds" due to an incident that took place in the previous volume. This time, they face more peril when Kory, Beth plus several other friends are kidnapped by a Mad Scientist who all but twirls his mustache. Mad Scientist wants to control their powers, and maybe take over the world at the same time. It's up to the trio, their elf friends and a savvy scientist to stop him, or disaster will strike. Like the first, it could use more character development. We get little glimpses of each one, but not much more. But it's an absorbing read nonetheless, if you like this kind of fantasy.

Published by Thriftbooks.com User , 16 years ago
Knight of Ghosts and Shadows was an excellent first start for this particular series. Very enjoyable. Fast-paced plot, excellent character flaws that lead to well-defined character development. The shame of it is that Summoned to Tourney just doesn't quite live up to KoG & S. Parts of the plot are fairly flat, and the character development is continued to some degree. However, the plot is a little too fast paced, and somewhat thin in places. Still, the characters will keep you riveted to the pages. Not top notch in comparison to KoG & S, but still a good book to have on the shelf.

I thought this was a very good and entertaining book.

Published by Thriftbooks.com User , 22 years ago
Once again, Mercedes Lackey has written a very entertaining book. The characters were well thought out, and I thought that the way they were further developed was very well done. The plot, while slow at first, only got better as the book progressed. A must read for all Lackey fans.
Copyright © 2022 Thriftbooks.com Terms of Use | Privacy Policy | Do Not Sell My Personal Information | Accessibility Statement
ThriftBooks® and the ThriftBooks® logo are registered trademarks of Thrift Books Global, LLC