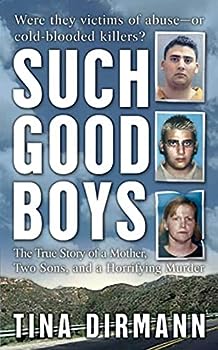 Such Good Boys: The True Story of a Mother, Two Sons and a Horrifying Murder

AN ABUSIVE MOTHER Raised in the suburb of Riverside, California, twenty-year-old college student Jason Bautista endured for years his emotionally disturbed mother's verbal and psychological abuse. She... This description may be from another edition of this product.

SUCH A SAD STORY

Published by Thriftbooks.com User , 16 years ago
This is one of the saddest books I have ever read. There is something very, very wrong with our social services system in the United States, and particularly California, that allowed two boys, from birth, to suffer the whims of violence and neglect that these two boys suffered. That they eventually killed their abusive mother is not surprising. What is surprising, is that they suffered her abuse for so long with NO adult intervention on their behalf. Tina Dirmann did an excellent job in telling their story in this book. (It's hard to believe it's her first, and hopefully she will continue writing books.) All of the adults mentioned in this book should be taken to task for their ho-hum attitudes towards this never-ending abuse, if not criminally charged with allowing it to go on. The boys' mother suffered severe psychiatric illnesses, undoubtedly paranoid schizophrenia. However, it should never be expected that minor children, who lived with the sequelae of severe mental illness, would know enough (or be brave enough) to turn to authorities to save themselves. The mother is the only parental figure they ever knew; that she treated them so criminally day after day, year after year, was not for them to judge, or to know enough to do anything about. It is really unbelievable that nothing was EVER done for these boys to save them from their mother. I am so sad for Jason and Matthew. I hope that Matthew has found some peace and has made a good life for himself, and that he continues to see and support his brother. Is it too much to hope that Jason will get treatment and will be able to continue his education in prison, and will someday come under the scrutiny of a caring judge who will give him a chance to live a normal, productive life? One can only hope. Someplace in our legal system, there must be a place for juveniles and young adults who have suffered at the hands of their parent every single day of their lives to get help, instead of such severe punishment, just as we have finally, finally realized that battered women deserve our pity and our understanding and our help. I am ashamed to be a member of this society where we punish children for finally acting out to save their own lives and sanity.

Published by Thriftbooks.com User , 17 years ago
Tina Dirmann did a fantastic job writing about this difficult case, which encompasses motherhood, mental illness, child abuse, and matricide. Dirmann does not interject her own biases or agenda into her writing, rather she presents the many different angles of this story in a compassionate fashion. That, in and of itself is impressive, because many writers of true crime tend to lean one side or the other,get caught up in emotion, and appear unable to really present all sides of the story. Lessons can be learned from this book regarding mental illness and society's responsibility to help families who are in need of intervention. It is so sad that the extended families of these boys failed not only them, but also tragically failed their mother.

Published by Thriftbooks.com User , 17 years ago
This book immediately drew me in with its gripping storyline and hard-hitting facts, which are presented without speculation throughout. The reader is left to determine what's real, who's telling the truth, if the murder was justified and, ultimately, could the sons have gotten away with their horrific crime if it wasn't for that one mistake...? The cadence of the book is brisk and to-the-point; evidence is presented matter-of-factly. Dirmann masterfully approaches character development by illustrating how the main characters dealt with events in their lives and through the impressions left on others. I read the book in three hours and then passed it along to two of my friends who also read it in 1-2 sittings. Highly recommended.

As If You Were LIving the Lives of the Crimials

Published by Thriftbooks.com User , 17 years ago
This is a tight book, which really puts you at the scene. No BS. No speculation, the hard hitting sad, scary, intense facts of a horrific murder. You won't be disappointed.

Published by Thriftbooks.com User , 17 years ago
This is an amazing tale that is so well written! Tina Dirmann makes you feel like you know these characters personally by the end of the story. Perfect for true crime fans.
Trustpilot
Copyright © 2022 Thriftbooks.com Terms of Use | Privacy Policy | Do Not Sell My Personal Information | Cookie Preferences | Accessibility Statement
ThriftBooks® and the ThriftBooks® logo are registered trademarks of Thrift Books Global, LLC