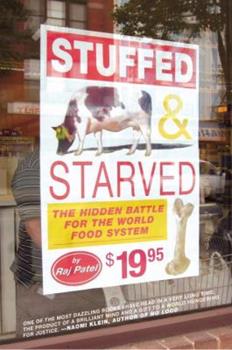 Stuffed and Starved: The Hidden Battle for the World Food System

How can starving people also be obese? Why does everything have soy in it? How do petrochemicals and biofuels control the price of food? It's a perverse fact of modern life: There are more starving people in the world than ever before (800 million) while there are also more people overweight (1 billion). To find out how we got to this point and what we can do about it, Raj Patel launched a comprehensive investigation into the global food network...

Published by Thriftbooks.com User , 13 years ago
"Stuffed and Starved" by Raj Patel is an ambitious piece of research and critical analysis of the world food system. As both a seasoned policy analyst and news reporter, Mr. Patel's thinking has been enriched through interactions with farmers, businesspeople, policymakers, and activists in four continents. Sharing his thoughts and experiences in an intelligent, mature and accessible manner, Mr. Patel contends that the corporate dominance of the global food production and distribution system must be challenged at the pain of pushing humanity into an ever more insecure and unsustainable future. Mr. Patel's core argument is that a relatively small number of giant corporations have used their power to benefit themselves at great cost to people's health and the environment. To help build his case, Mr. Patel traveled to Brazil, India and the U.S. to find small farmers who are all but forced to produce food under exploitative terms set by the agribusiness giants. Under these conditions, it is not surprising that farmers who are pressed to merely survive are becoming less and less concerned about conserving land and water resources, much less with preserving the unique varieties of crops that might otherwise enrich our collective experience with food. Instead, farmers tend to produce commodity goods such as soy beans that are often shipped to distant consumers located thousands of miles away; the author follows the flow of product through the supply chain to document and contrast how individual farmers receive next to nothing from their labors while heavily-capitalized distributors, processors and retailers gain enormous profits. Meanwhile, consumers in developed countries gain access to an abundance of cheap but nutritiously-dubious food while many in poorer countries live calorie-deficient lives. Throughout the text, Mr. Patel provides valuable perspective and context. Mr. Patel views the Green Revolution of the 1960s as an attempt to help India and other recipient countries to resist communism and only secondarily as a project to support the local inhabitants. In fact, Mr. Patel discusses how the inroads made by multinational firms into the Indian farming economy has allowed these companies to successfully market patented pesticides, seeds and farm implements while simultatenously attempting to secure intellectual property rights to indigenous knowledge. Mr. Patel goes on to explain that the rubric of improving the lives of the poor has more recently been used by the biotech industry to market products such as 'golden rice', a food that offers a non-solution to the underlying conditions that drive poverty and malnutrition. Interestingly, Mr. Patel shows how the military's development of packaged foods production and distribution laid the groundwork for the industrial system we take for granted today. Mr. Patel deconstructs the modern supermarket to demonstrate that the illusion of choice serves to alienate and distract us from our relative pow

Published by Thriftbooks.com User , 13 years ago
A very digestible read for the consumer that's liable to provoke dyspepsia in the bellies of food giants and governments alike. In taking a moralistic view of starvation and obesity, our media, governments and many NGOs have condemned those suffering to more of the same. While the institutional causes remain unaddressed - in large part thanks to public sector responsibility being abdicated to private sector interests - we can only expect more headlines about food riots and editorials on farmer suicides, just as diabetes (II) continues apace. The resounding conclusion is that `free market' policies remain accountable only to shareholders - not to farmers, not to consumers, and certainly not to the governments that unleashed them. But Stuffed & Starved is as prescriptive as it is diagnostic. By identifying the grassroots organisations that have come to terms with the problems and begun to enact the social changes necessary for remedy, Patel brings to the page a message of hope and understanding with great clarity. To his credit, he is no less objective or critical in examining these social movements (as they struggle to develop) than he is of the corporations, WTO, and World Bank. If you're interested in a comprehensive overview of what's behind the headlines, of what's causing the paradox of starvation at the same time as an epidemic of obesity, this is the book.

Published by Thriftbooks.com User , 13 years ago
The price of food is skyrocketing. There are food riots emerging across the globe. It's a crisis that threatens the stability of some governments. Why is this happening? Raj Patel explains how we got here in this remarkably prophetic book. And he's not afraid to name the bad guys. Patel has deservedly emerged as one of the top experts on this crisis, and he writes with an abundance of passion and wit. -Kemble Scott, editor, SoMa Literary Review

Published by Thriftbooks.com User , 13 years ago
In his new book, "Stuffed and Starved," Raj Patel hits a nerve, or rather a whole digestive system worth of nerves. Until late, these two hot topics-obesity and the food crisis- were discussed separately. Patel's research shows why and how there are now more obese people than ever before, and more starving people. Patel takes an original view and places the blame not just on the governments, but on their famous trade agreements that we all thought were so fabulous-NAFTA ring a bell? He discusses how the "consumer" market and trade agreements are what have caused an increase in percentage of farmer suicides, food riots, and starving communities throughout the world. The book is a fast read, full of stuff you definitely didn't know. Although perhaps intended for the political or activist type, it's a worthwhile, interesting read for anyone who shops at a supermarket, a Wal-Mart, is thinking of going organic, or is upset about the rising cost of food. Not only does Patel offer a hearty argument for his points, but he offers a 10-step "fix" for us, everyday folk to start taking to help the problem....that, at least is worth the buy/read-in...

Published by Thriftbooks.com User , 13 years ago
I've known bits and pieces about how our food gets to us but nothing that lays it out as this book does. Chapters range from what's happening to farmers and farms here in the U.S. and in diverse places like South Africa, India, Korea. Patel then moves on to the middlemen in the food chain, the food companies that exert control on farmers and consumers, and finally spends time on supermarkets, as well as the corporate sculpting of our tastes. It's an opinionated book - but doesn't try to hide it. Regardless of where you're coming from, the book is so engaging and chockerblock full of information that you're likely to come away with new knowledge, at least. I moved along further in actually changing some of my thinking. Prior to reading this book I understood perhaps intuitively that oligopolistic corporate control over anything is bad for everyone other than the corporation. But Patel, as his Time review said, really did connect the dots in the story from farm to fork, and as a result I have much more specific concerns, many of which will likely influence some choices I make. Favorites include the chapter on soy - the hidden ingredient I had no idea existed in so much of the food I buy. Stories about the industrial allure of Soy include beguiling tidbits about Henry Ford. I learned that someone created a patent for the supermarket - the patent diagrams (reproduced in the book) are enlightening. Also, stories from farmers around the world - women selling their farm produce outside a new supermarket being built near Durban in South Africa, a farmer in 'green revolution' Punjab, India bemoaning the now complete leaching of his soil and wondering when the 'revolution' will bring him real freedom from his debt. These were valuable lenses into the lives of people I'd likely never meet, given my urban inclinations, but who clearly are connected to me in producing the food I eat. If you're at all interested in either food or the structure of our world through a case study of the food system, you'll find this a worthwhile read. Whether you end up agreeing with Patel or not, there's enough here that you'll be alternately shocked, amused, entertained and informed.
Copyright © 2022 Thriftbooks.com Terms of Use | Privacy Policy | Do Not Sell My Personal Information | Accessibility Statement
ThriftBooks® and the ThriftBooks® logo are registered trademarks of Thrift Books Global, LLC