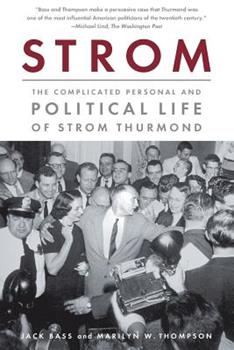 Strom: The Complicated Personal and Political Life of Strom Thurmond

In Strom , Jack Bass and Marilyn W. Thompson deliver a remarkable look at the life of a remarkable -- and complicated -- politician. First elected to public office in 1929, Strom Thurmond was a pivotal figure in the nation's politics for more than seven decades particularly when it came to issues of race: the Dixiecrat presidential candidate in 1948, originator of the 1956 "Southern Manifesto" against the Brown vs. Board of Education ruling, holder...

Published by Thriftbooks.com User , 15 years ago
Strom Thurmond is a very complex and contradictory man indeed. He at first want to help black people to progress, but later, he denounced them as being opportunists and subversives who push their way into white institutions. He then condemn "miscegenation" yet practiced it. His daughter, Essie Mae, is the clearest proof. He has a madonna/magalen complex when it comes to women in his life. He married "good, virginal" white women and have women such as Carrie Butler and Susan Logue as mistresses or concubines. He once opposed the nomination of Thurgood Marshall to the Supreme Court. Twenty plus years later, he embraced and supported Clarence Thomas and condemned Anita Hill as a liar. This is an interesting book to read if you really want to know who Strom Thurmond really is all about.

A Satisfying and Fair Biography of Thurmond

Published by Thriftbooks.com User , 15 years ago
It is easy to characterize Thurmond as the typical racist "Southern Politico." However, Bass and Thompson even-handedly portray Thurmond as a truly complicated man who was a key barometer of the last fifty years of American politics. The authors succeed splendidly in capturing the transformation of the Southern politics and do a masterful and fair job of capturing the complex human relationship between Thurmond and his illegitimate African-American daughter Essie Mae Washington-Williams. Thus, making this book is an extremely readable, fair, and satisfying biography. This is a must-read for anyone interested in Southern history, civil rights, politics, and biography. And, for the non-Southerner, this book is very enlightening.

Published by Thriftbooks.com User , 15 years ago
No individual displayed a higher level of influence in 20th century South Carolina politics than Strom Thurmond. The man most known for his Southern stance to maintain segregation during the mid 20th century would go on to become the "longest serving senator in United States History," when reelected in 1997. America has obviously undergone radical changes in the last 50 years with regard to race, so how did an avid racist manage to get reelected for so many years during tremendous social change? Did Strom, ever the politician, simply pander to the inevitable black vote or did he genuinely have a change of heart about the black populace? Dr. Bass and Marilyn Thompson's book, "Ol' Strom," was an eye-opening book for me, and I would recommend it to anyone who wants to know more about South Carolina and Southern politics within the last century. Unlike most South Carolinians, I didn't know much about Strom Thurmond because I did not grow up in this state. After reading this book, I don't believe that one can truly begin to grasp South Carolina until you understand who Strom Thurmond was because he represented the sentiment of a large portion of the people. As Strom's mentality on racial issues matured, I don't think it's any accident that a large portion of the white populace whom he represented matured with him.

Published by Thriftbooks.com User , 16 years ago
To the casual observer Strom Thurmond would not seem to be a complicated man. The 1948 Dixiecrat presidential candidate would seem to be the typical Old South politician, a white supremacist who moderated his tone as the years went by out of political necessity. Jack Bass and Marilyn Thompson have however done a masterful job of showing just what a complex man this legend of the Senate really was. The two authors of this book are imminently qualified to write what may be for years to come the definitive biography of Strom Thurmond because both spent years as journalists covering the Senior Senator from South Carolina. Thompson was the reporter that Strom's illegitimate daughter Essie Mae Washington-Williams contacted about her story after her father's death and Bass kept such a critical journalistic eye on Thurmond that the Senator once referred to Bass as a skunk. Strom Thurmond is presented in this book not as a stereotype but as a man, and a very complex man at that. This is a man who as School Superintendent of his home county went out of his way to fight illiteracy among blacks. He is also a man who led the fight to repeal South Carolina's poll tax and was primarily responsible for additional federal aid to traditionally black colleges. Here also was a man who counted African-Americans among his closest and most able advisors, a man who voted in favor of the King holiday, and the only Republican on the Senate Armed Services Committee who voted in favor of Bill Clinton's African-American nominee for Secretary of the Air Force. On the other hand here was a man that said that all of the armed forces of the United States could not force South Carolina to integrate and who led the segregationist bolt from the Democratic Party in 1948. Above all, Thurmond's legacy lies in the political landscape of America today. Before his Dixiecrat campaign in 1948 most Southerners could not conceive of voting against a Democratic presidential nominee. Thurmand's candidacy allowed many such Southerners to break that habit without actually having to vote for a Republican and once that crack appeared in the solid South, the dam was bound to break and break soon. Thurmond himself then demolished the dam by switching parties and since that time the Democratic presidential candidate has only once carried the majority of states in the old Confederacy. This new solid Republican South has for better or worse irreversibly changed the political dynamics of the United States and Thurmond was more responsible for this change than any other three people put together. Bass and Thompson have also done a nice job of chronicling Thurmond's relationship with his illegitimate daughter Essie Mae Washington-Williams. The authors do imply however that Williams' mother might become the kind of legend that Sally Hemings has become but from what I could see, if Thurmond wasn't the best father in the world, Carrie Butler was a far worse mother. Thankfully Mrs. Williams had an aun
Copyright © 2020 Thriftbooks.com Terms of Use | Privacy Policy | Do Not Sell My Personal Information | Accessibility Statement
ThriftBooks® and the ThriftBooks® logo are registered trademarks of Thrift Books Global, LLC