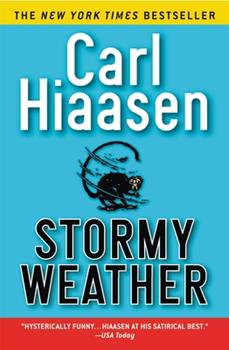 NEW YORK TIMES BESTSELLER "Hysterically funny...Hiaasen at his satirical best." - USA Today Two honeymooners wake up early, make love twice, and brace themselves for a spectacle they won't be watching from the sidelines. A seductive con artiste stumbles into a scam that promises more cool cash than the lottery. A shotgun-toting mobile home salesman is about to close a deal with disaster. A law school dropout will be chasing one Gaboon viper, a troop...

Published by Thriftbooks.com User , 16 years ago
Given the recent hurricanes Katrina and Rita that hit the United States in the past year, 'Stormy Weather,' by Carl Hiaasen, seemed like a timely read. This novel tells a story of tourists, native Floridians, scam artists, and insurance adjusters as they interact in Miami after a Hurricane strikes. Max and Bonnie Lamb are honeymooning in Disney World when the hurricane hits Florida. Bonnie just wants to resume the honey moon festivities, but her husband, Max, an advertising rep, sees an opportunity to impress his bosses and drags Bonnie down to Miami to get footage of the destruction carved out by the storm. Edie Marsh has been roving Florida in search of a Kennedy. Her plan has been to seduce one, and then blackmail them on her way to easy street. The plan never bears fruit. After the hurricane, she sees an opportunity to work another scam and sets off for Miami with a partner named Snapper, who acquired his nickname after an unfortunate childhoot incident left him with a deformed jaw. Edie's plans go awry when Snapper turns out to be more difficult to handle than she thought. Augustine took a plane trip one day to discover he had spent months in a coma after the plane he was riding crashed. He also found wealth in the form of an insurance settlement. He no longer works, and spends his time dating the wrong women and juggling human skulls. Just before the hurricane strikes, he learns he had inherited his uncles exotic animal farm. After the hurricane, he has a problem: although the weather passed, the animals are loose. Finally, there is Skink. This crazy wild man has great teeth and a protective streak for Florida's wilderness. He trusts one man, Jim Tile (one of Florida's few black highway patrolmen). He has been waiting for just the right hurricane to hit Florida, and is disappointed when this one doesn't do all he hoped for. However, when he spies a tourist taking advantage of the destruction to shoot home movies, he hatches a new plan. These are just some of the characters that fill the pages of 'Stormy Weather.' Throughout the novel, they end up running into each other and confounding one another's plans. It's an incredibly twisted plot, but Hiaasen pulls it off perfectly. This is more than just a spirited novel. This book allows Hiaasen to take swipes at many Florida institutions from Disney World and high rise developments to crooked politicians that sell out the environment and scam artists preying on the desperate after the hurricane. Still, the novel is a great read and to borrow a cliche, a real page turner. I recommend this novel to anyone that wants a fun and entertaining read that falls on the edge of crime fiction. Elmore Leonard and Dave Barry fans should enjoy it immensely. Existing fans of Hiaasen will delight in getting more adventures of Skink. Overall Grade: 5 stars.

One of Hiaasen's best early books

Published by Thriftbooks.com User , 17 years ago
If you believe that there's a little good in everyone, then Stormy Weather and Carl Hiaasen are not for you. Stormy Weather is classic Hiaasen. His writing is so sarcastic and unrestrained by reality that it reminds me a little of Douglas Adams (Hitchhiker's Guide to the Galaxy) or Neil Stevenson (Snow Crash). Interestingly, these are science fiction authors and Hiaasen doesn't write science fiction, but, like these science fiction writers, Hiaasen's writing is modern and clever and his imagination knows no limits. His books are parodies of human nature, especially greed and stupidity, sort of like Voltaire's Candide. After painting such surreal pictures of a cast of very selfish characters, often criminals, Hiaasen then draws upon some Dante as he assigns the characters to their inevitable and well-earned unique circles of hell (that's usually in Florida involving water, alligators, or at least a storm). It says something about a writer when his best known hero is a one-eyed crazy man who lives in the everglades but used to be the governor of the great state of Florida. If you like the sarcastic social comedy of George Carlin, the ironic wit of Steven Wright, and the slapstick of Peter Sellers, then you will love Carol Hiaasen's Stormy Weather. If you find Carlin offensive, Wright unfunny, and Sellers overrated, then you're going to hate Carol Hiaasen. If you're new to Hiaasen's books, Stormy Weather is a good place to start. My favorite Hiaasen books are: Strip Tease, 1993; Stormy Weather, 1995; Lucky You, 1997; Sick Puppy, 2000; and Skinny Dip, 2004.

Published by Thriftbooks.com User , 21 years ago
After weeks of overtime I escaped to the Sierra Foothills, hosted to a relaxing Thanksgiving weekend with Stormy Weather (thanks Bill & Karen!). The greatest disappointment of this book was that it ended before the weekend & I had no sequel! "On August 23, the day before the hurricane struck, Max and Bonnie Lamb awoke early, made love twiece and rode the shuttle bus to Disney World." So begins this marvelously improbably tale which weaves together the paths of newlyweds, cons, thugs, and a living-off-the-land, scraggly haired ex-governor. Easy to pick up and slide into, difficult to put down, this romp into Hurricane Andrew's wake tosses quirky characters into chaos. Not as extreme as Hitchiker's Guide to the Galaxy (Adams), more of a down-home Good Omens (Pratchett & Gaiman) without devils or angels. Character development is not intense, but the contrived situations that bring those characters to light actually seem plausible. Fewer laughs in this book and more subconscious chuckles. If you want something traditional & predictable, leave this one on the shelf and go buy Grisham or Clancy. But if a road-kill scavenging, toad-licking ex-governor piques your curiousity (and he's a much better guardian of the land than our current "president"), grant serious consideration to this book! Five stars for creating an extremely improbable story and making it seem as natural as a tale about the Springfield 'burbs! Five stars for fun. A truly amusing diversion. (If you'd to comment on this review, please click the "about me" link above & email me. Thanks!)

Published by Thriftbooks.com User , 22 years ago
This is one of the best crime thrillers I've ever read -- like all great crime novels, it transcends the genre by being such a wonderful example of it. It's similar to what Elmore Leonard does, but much as I love Leonard, I have even more of an affection for Hiaasen. STORMY WEATHER is an absolute laugh riot from start to finish, the labyrinthe plot makes it un-putdownable, and it's got an intense streak of moral high ground to keep things interesting. This book rules. --Thomas S. Roche is the editor of the NOIROTICA series.

I Didn't Want it to End

Published by Thriftbooks.com User , 22 years ago
As a Florida resident, I can surely attest that the craziness demonstrated in this book is a fact! Hiassen is a master at capturing our insane little world and making it hilarious. I loved this book - and as I neared the end - I wished it would go on forever.
Trustpilot
Copyright © 2022 Thriftbooks.com Terms of Use | Privacy Policy | Do Not Sell My Personal Information | Accessibility Statement
ThriftBooks® and the ThriftBooks® logo are registered trademarks of Thrift Books Global, LLC