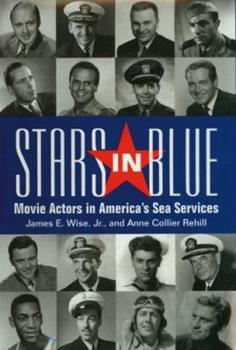 The lives of movie stars are often more closely followed than those of political leaders, sports figures, or sometimes one's own relatives, but even the most avid film buffs might be surprised to... This description may be from another edition of this product.

Published by Thriftbooks.com User , 23 years ago
This book is unlikely to revolutionize anyone's understanding of the history of the US Navy or the progress of World War II (when most of its subjects served), but it *is* great fun to read. The chapters are short, and the overall effect is a lot like sitting around listening to a bunch of old-timers spinning yarns about their time at sea. Some of the stories are exciting (Eddie Albert's), some are dull (Rock Hudson's), and at least one (Jack Lemmon's) is falling-down funny.Though it may not have been the authors' purpose, the book also highlights an important truth about modern war: most of those who serve do so by doing dull, repetitive, vital jobs far from the front lines. "Mister Roberts" may be the most realistic war story of our era, after all.

Published by Thriftbooks.com User , 24 years ago
When World War II began it was natural that many movie stars, along with thousands of other Americans, would gravitate to the U.S. Navy. Some stars' contributions were confined to extensions of their show-business careers, but others rendered heroic combat service, and still others labored unglamorously in the mundane tasks without which no war can be won Wayne Morris (fighter ace), Aldo Ray (frogman), Bill Cosby (Korean-era physical therapist), Rock Hudson (aircraft mechanic), Cesar Romero (Chief Boatswain's Mate USCG); their stories and many others are told in this fascinating record, with bibliography, good index, and many rare photos, some from the stars' own albums. Highly recommended. (The "score" rating is an ineradicable feature of the page. This reviewer does not "score" books.)
Trustpilot
Copyright © 2022 Thriftbooks.com Terms of Use | Privacy Policy | Do Not Sell My Personal Information | Accessibility Statement
ThriftBooks® and the ThriftBooks® logo are registered trademarks of Thrift Books Global, LLC