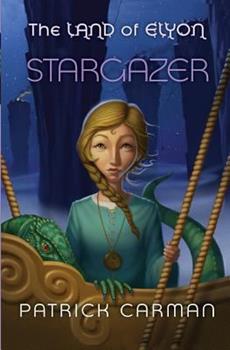 The Land of Elyon book #5: Stargazer

Book five in the Land of Elyon series. A magical menace is on the loose . . . forcing Alexa to take to the seas and save a secret community located in a strange land known as the Five Stone Pillars.

Published by Thriftbooks.com User , 12 years ago
Wow, this book is AMAZING!! Of all the Land of Elyon books, this is the best! Patrick Carman never fails to surprise readers as they dig through his books. I don't want to tell you much about this book (you need to read it yourself!), but it is truly amazing. Alexa finds her calling on the world at the end. That is all I will say. I highly recommend this book to all who love adventure books!

Fans will look forward to reading more from this talented author.

Published by Thriftbooks.com User , 12 years ago
In INTO THE MIST, a prequel to The Land of Elyon series, Alexa and her good friend Yipes boarded a majestic ship captained by Roland Warvold. As they sailed toward their mysterious destination, Captain Roland captivates their attentions as he describes his and his brother's adventures escaping a nightmarish orphanage and discovering their destiny. Now, in STARGAZER, they finally reach their goal, the amazing colony called the Five Stone Pillars. Exactly as it sounds, it is comprised of five huge pillars sprouting out of The Lonely Sea. The community originated from the orphans rescued by Captain Roland and his brother as described in the prequel, and has grown to a thriving society of over 200 people and a handful of pet dogs. Alexa and Yipes love getting to know this new place and her people, and explore the wonders of the three pillars that are settled (pillars four and five are uninhabited). Traveling among the pillars takes a bit of getting used to, not to mention a whole lot of bravery, as rope bridges swing a thousand feet above the crashing surf below. But it's all part of the charm of this enchanting society. Alexa and Yipes quickly make new friends, including a woman by the name of Matilda, who stands just a bit taller than Yipes's own tiny size. One pillar holds the farms to grow food, another contains fresh water, and they are especially thrilled with the third pillar that offers crisscrossed rope-like vines on which the citizens enjoy sliding; they call it skimming, and it rather resembles a zip line. However, Alexa and Yipes can't get too comfortable because life on the Five Pillars takes a dangerous turn --- and it all started when they arrived. Unknowingly, the evil Abaddon, in the form of a sea monster, has followed the ship to the Five Pillars. Abaddon is determined to rule this society, or destroy it in the process. Filled with guilt at leading him here, and disbelief that he still exists after their last encounter, Alexa takes on the overwhelming task of rescuing the Five Pillars. She joins forces with her new friends to try to figure out a way to defeat the evil and save their home. In the process, they risk a venture over to the deserted fourth pillar and make even more amazing discoveries. But they are quickly running out of time. Unable to reach the top of the pillars, Abaddon is pounding away the base of one of the pillars in order to knock it over and gain access. Will the people of the Five Pillars be able to defeat the evil in time? Truly an amazing storyteller, Patrick Carman's imagination runs full steam, never threatening to quit or run dry. Each chapter promises new excitement and even more colorful characters. He also writes with a unique style that encourages a positive outlook on life, one that truly shines through his amazing character of Alexa: "My strength was returning as we went on. It occurred to me then that it was in times of struggle that I found the best parts of myself --- courage, loyalty, an unex

Published by Thriftbooks.com User , 13 years ago
This is a beautiful story! I love the whole series- how big and small, each has an essential part to play... trusting, forgiving, accepting... and ultimately finding your place and purpose. They are calling this book 4 and it IS the 4th story of Alexa Daly, but "Into the Mist" should come before this one, even if the story within the story happens before Book 1.

One if by land, two if by sea

Published by Thriftbooks.com User , 13 years ago
"Suspended under a twilight canopy We'll search the clouds for a star to guide us" (The Fifth Dimension - Up, Up and Away") NOW we're talking! The fifth book in the Land of Elyon series is by far the best with regards to plot, adventure and characterization. It's also steeped in religious imagery, as the young heroine receives inspiration and guidance from Elyon (Good) while being taunted and hunted by Abaddon (Evil). From this point of view, "Stargazer" reminds me of the last book of the Narnia series, The Last Battle. In The Dark Hills Divide, young Alexa Daley's adventurous spirit refuses to allow her to remain within the confines of her walled village, and she sneaks out into the wild and magical world outside the walls. In Beyond The Valley Of Thorns, her adventures take her away from home and into the Land of Elyon, where she makes friends with a giant, and battles an evil villain and an army of ogres. Tenth City ends the first trilogy and reveals major secrets about Alexa's heritage. It also contains an epic battle, where (naturally) good triumphs over evil, but Abaddon lives to fight another day in another place and time. The fourth book Into The Mist is a bridge leading from the trilogy to this book. It fills in some gaps and sets the stage for "Stargazer", but more or less is just the author treading water and catching his breath. This brings us to book five, where Alexa and her companions continue their journey across the Lonely Sea and arrive at the hidden realm of the Five Stone Pillars. Unfortunately, they are not alone, as an evil monster has trailed them all the way, and now Alexa meets some new friends who must help her to defeat the evil Abaddon in a majorly exciting throw down grudge match. There's no need to read the previous four books to enjoy "Stargazer", which is set in a different place and has mostly new characters, but I'm glad I read them all and experienced the whole adventure. The author also quite helpfully includes a recap of the previous books in his introductory chapter. From the ending, it seems that this may be the last in the series, but the author craftily leaves himself an opening for a possible continuation. A short, well written story that is highly recommended for young readers from around nine or ten. "I walked, I ran, I jumped, I flew Right off the ground to float to you There's no gravity to hold me down for real" (Jordin Sparks feat. Chris Brown - "No Air") Amanda Richards, August 20, 2008

Wonderful Addition to a great series

Published by Thriftbooks.com User , 13 years ago
I have been waiting for this book ever since I finished into the mist, and was hoping that it would be as great as the previous book. It was. I loved the writing and the story line, along with the great characters. I was hoping that it would be similar to Into the Mist, with more narration from Roland about the boyhood of the Warvold brothers since I really like learning about their past, but it turned back to the story of Alexa. Still though, it lived up to expectation. It is about a girl named Alexa who along with her companions finally arrive to the five stone pillars. Tragedy strikes at once in the first 20 pages when there is an encounter with the sea monster, Abaddon, and a beloved character's life is taken by him. Alexa then starts working with the other surviver and new friends, Matilda who is also very small like Yipes and Marco, a strong boy a year older then Alexa, to work towards defeating the monster Abaddon and saving the great world of the five stone pillars. With the help from some people Alexa has heard about, but never met, Alexa comes up with a plan. Will it work, or will something unexpected or tragic occur? I really adored this book and really hope that there will be a next book coming out soon. It won't disapoint Land of Elyon fans!
Copyright © 2020 Thriftbooks.com Terms of Use | Privacy Policy | Do Not Sell My Personal Information | Accessibility Statement
ThriftBooks® and the ThriftBooks® logo are registered trademarks of Thrift Books Global, LLC