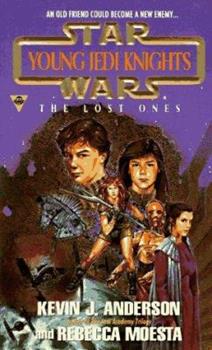 Reuniting with the street orphan Zekk while visiting their home on Coruscant, twins Jacen and Jaina Solo see how different they have become from their wild but talented friend, who is tempted by the... This description may be from another edition of this product.

Published by Thriftbooks.com User , 19 years ago
I first saw STAR WARS in 1991, I was seven. When this book came out in '96, it was the first Star Wars book I'd ever read, and was the conduit between fan and fanatic. Granted, most of it didn't make a lot of sense as I hadn't read the previous five books in the series yet, but it was still a page-turning read. 'Jedi Under Seige' wraps up the 'Shadow Academy' series of Young Jedi Knights. This series was done as a series of individual events that all tied together in 'Seige'. The second sub-series, 'Diversity Alliance', is one long adventure divided into five major events. A third sub-series, 'The Gallandro Trilogy', is more or less a waste of time. But 'Seige', alone or in context, delivers the goods.Kavin J. Anderson has probably never had an original idea in his life. He's written numerous Star Wars novels, co-written three Dune novels, at least three X-files books, but only a precious few original stories whose plots seem suspiciously like old episodes of Star Trek. Anderson's wife, Rebecca Moesta, has even fewer credentials. However, Anderson and Moesta both have solid skills at characterizing, plot-development and visualizastion, though sometimes their dialogue falls flat.Despite all of the down-falls that would seem to make this book a waste of time, it's not. The few hours spanned in the story move faster than real-time with action, emotion, and some genuinely witty dialogue here and there.

I couldn't stop reading it!

Published by Thriftbooks.com User , 22 years ago
It's so cool! Finally, the last battle! And whenever you get to an exciting part, it changes charecters so have to keep reading. I like the way they plan thier traps. Read it!

Published by Thriftbooks.com User , 22 years ago
I agree with the last review except for one thing: You are not the only 14-yr-old girl who likes Star Wars!! My best friend and I are both 14 (and girls!) and we love SW!! This WAS one of the best Young Jedi Knights, and it was good that Zekk finally turned from the Dark Side. Plus, Jacen and Jaina are always cool. I would recommend this book to anyone who likes SW and Jacen and Jaina Solo.

YJK, YOU GUYS KICK GALACTIC BUTT! This is a fact!

Published by Thriftbooks.com User , 22 years ago
I'm probably one of the only 14- year- old female SW fans ever. I've read almost all of the books in this series (I'm currently reading Jedi Bounty), and Jedi Under Seige was AWESOME! I began to cry a little when Zekk apologized to Jaina for acting so poorly and then getting knocked unconsious by a flying chunk of Luke's Jedi Academy. You go, Zekk!!!! What an awesome book (and series)! Rebecca and Kevin, KEEP UP THE WONDERFUL WORK!!! May the Force be with you- ALWAYS!!!
Copyright © 2022 Thriftbooks.com Terms of Use | Privacy Policy | Do Not Sell My Personal Information | Accessibility Statement
ThriftBooks® and the ThriftBooks® logo are registered trademarks of Thrift Books Global, LLC