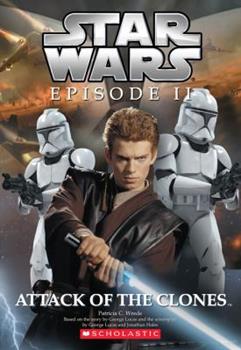 The biggest movie event of 2002 in a stellar novelization by acclaimed author Patrica C. Wrede. Anakin Skywalker is now age eighteen and facing temptations of love, violence, betrayal, honor, and above all, the dark side of the Force.

Published by Thriftbooks.com User , 17 years ago
In the book Star Wars Episode 2 Attack of the Clones you will find Jedi fighting the dark side. My favorite parts are when Jango Fett and Obi-Wan fought on Komino. Also, the execution and the war on Genosis. Finally, I like the light saber fight at the end. I recommend this fictional book because this book is adventuresome, unpredictable, and shows exitement through out the novel. If you want to find out more read this book.

Published by Thriftbooks.com User , 18 years ago
Starwars Episode 2 was an action/lovestory. The setting of the story was were the Jedis tried searching for the bad guys all over the galaxy. The main characters in the book were Obi won Kenobi ,the Queen and all the Jedi masters. My favorite character is Yoda because he was a very good Jedi master.My favorite part of the book was when all the Jedis fight against the clones.I would recommend this book to children betwen the ages of 7-13 because it is very cool and action packed.

Published by Thriftbooks.com User , 19 years ago
This is one of the best Jr. noveliation. It give us a in depth look in what is in the film. I love it because in it it shows us the continuing bond in between Anakin Skywalker & Padme Amidala her real last name is Naberrie. This is a very good book if your a Star Wars fan. Thanks George for the best films ever.

Published by Thriftbooks.com User , 19 years ago
If you're a kid under 13 or so, or even someone older with an extremelly small budget, this one's for you. However, if it's a large story, and expanded scenes and dialogue you want, read the adult's version. After reading them both, I have to say I enjoyed that one more, though this one was a welcome treat as well. The characters are extremelly well defined, I truly could identify with all of them, Anakin especially, at certain parts. So, a good book for any Star Wars fan.

This movie is going to be "gonzo"

Published by Thriftbooks.com User , 19 years ago
Patricia Wrede may even have outdone her previous jaunt into the Star Wars universe, the junior novelization for "Phantom Menace." Her novelization for "Attack of the Clones" is exciting, romantic, funny, dramatic, and everything we expect from Star Wars. Doubtlessly the movie will be equally good, if not better."Attack" takes place ten years after "Phantom Menace." The cocky little boy Anakin Skywalker is now a young man (still cocky), and apprenticed to Obi-Wan Kenobi. When an assassination attempt is made on Senator Padme Amidala, the Jedi Knights are called in to protect her and find out who was responsible. The knights assigned are Obi-Wan and Anakin, who have not seen Amidala for ten years. Anakin, against his Jedi training, falls in love with the beautiful young woman.All of this takes place as a group of separatists, led by a former Jedi, are gathering more planets to themselves, and the Republic is threatened by a civil war that even the Jedi can't deal with. As Anakin struggles with grief, love, and personal division, he will take the first steps toward his destiny.I definitely recommend this novelization over the adult one. Wrede is a better writer, with a spare but evocative style that never gets overcomplicated. Action scenes and emotional scenes are done with equal detail and a manner that never grows confusing. If the climactic battle in the movie is as good as it is in this book, it'll be great.Wrede outdoes herself with atmosphere: the scenes with Anakin and Amidala fairly crackle with romantic tension, while there is a sad poignancy to many of the scenes with Obi-Wan and Anakin are in. (Perhaps the only letdowns are death scenes, which seem rather rushed) Anakin himself is one of the characters that Wrede writes best; she lets us see a great deal of his emotion, his anger, his pain, his grief, his love, and his desperation not to let down his master while being unable to fully stick to what is necessary in a Jedi. We are also shown Obi-Wan's uncertainty, Yoda's sense of humor, and the consequences when a powerful, rebellious Jedi leaves the order.There is some excellent writing here from the screenplay, ranging from humor (the scene where Anakin "daredevils" over Coruscant) to poignant (Anakin's avowal that Obi-Wan is like a father to him) to parallels from the second trilogy (the bar fight, and a certain injury sustained near the end). Yes, Jar Jar Binks is here, but not for very long; fans of Boba Fett may also enjoy seeing his background, and the origins of certain stupid white-armored troopers. The worst part of it is the end, and the knowledge that we'll have to wait a few more years for the next part. Read this book, then go watch the movie. I don't think either will disappoint you.
Copyright © 2020 Thriftbooks.com Terms of Use | Privacy Policy | Do Not Sell My Personal Information | Accessibility Statement
ThriftBooks® and the ThriftBooks® logo are registered trademarks of Thrift Books Global, LLC