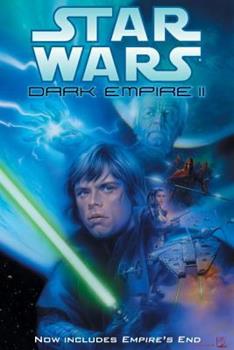 by Tom Veitch and Cam Kennedy

One of the most influential tales in the history of "Star Wars," "Dark Empire II" gets a brand new edition that includes "Empire's End" in the same volume for the first time With the Empire in retreat, Luke Skywalker undertakes a quest to rebuild the Jedi. Yet he has spent time as the Emperor's thrall, and the taint of the Dark Side still lurks in his mind. When Palpatine unveils an insidious plan to conquer the galaxy using Han and Leia's own children,...

Very good sequel- recommended ONLY if you liked the first.

Published by Thriftbooks.com User , 12 years ago
Some bad characterization and a bit of foul dialogue aren't enough to ruin this great EU work.

Published by Thriftbooks.com User , 15 years ago
Excellent edition, highly recommended. This edition includes the Hard to find out of print "Empire's End"

Published by Thriftbooks.com User , 15 years ago
This chapter of the Star Wars Universe takes place six years after the events on Endor (the events in the Return of the Jedi film). Luke has just recovered from being led by the Emperor and turning to the dark side himself. This series of books (Dark Empire I, II, and Empire's End) has been widely received by many who follow the Expanded Universe. Events in future books are shaped greatly by what occurs in these books, namely restarting the Jedi Academy on Yavin. Now, for the first time, Empire's End is included with this re-release of the comic by Dark Horse. This set of both books is a Must Have for any Star Wars fan.

Not bad for a pair of smugglers...er, comic book artists....

Published by Thriftbooks.com User , 18 years ago
The struggle for mastery of the galaxy continues in this second installment of Dark Horse's Dark Empire graphic novel series. Although Leia Organa Solo and her twin brother Luke Skywalker defeated the clone of Emperor Palpatine, his minions, led by Warlord Sedriss, continue their campaign to wrest star systems away from the New Republic and back into the Imperial fold. Even worse, the spirit-force of Palpatine still resonates even though it is disembodied, and although rebellious members of his own court have destroyed more of his clone bodies all the Emperor needs is one in which to take physical form. Knowing that he will really die forever without another body to inhabit, Palpatine sets his sights on Leia's third child, Anakin Solo. If he succeeds, Palpatine will achieve two of his most cherished goals: continued survival and revenge upon the man who betrayed him at Endor, Darth Vader.Tom Veitch and Cam Kennedy return to dazzle Star Wars aficionados with their story and artwork in Dark Empire II. As in the best Expanded Universe novels, this creative team mixes classic Star Wars characters from the movies and meld them with a cast of new friends and foes, while enriching the "galaxy far, far away" with new worlds and exotic aliens. They even follow the trilogy's structure by making Dark Empire II a cliffhanger, making sure we readers looked forward to the concluding installment, Empire's End.

A GREAT SEQUEL TO DARK EMPIRE

Published by Thriftbooks.com User , 22 years ago
Actually, I do wonder about some of the stuff in here. The Emperor had Force storms in Dark Empire I; where are they in DE II? He could have used one to scoop up the Jedi children on New Alderaan and use the Galaxy Gun on the planet to eliminate the last vestiges of opposition!
Trustpilot
Copyright © 2022 Thriftbooks.com Terms of Use | Privacy Policy | Do Not Sell My Personal Information | Accessibility Statement
ThriftBooks® and the ThriftBooks® logo are registered trademarks of Thrift Books Global, LLC